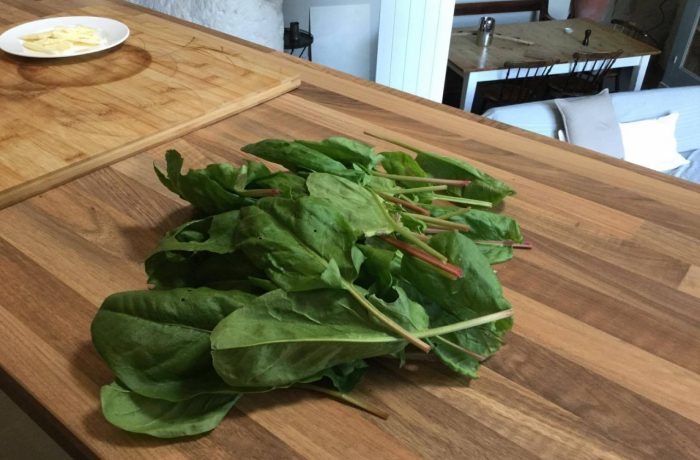 It seemed like a busy morning which seems impossible as there was absolutely nothing to achieve. The clocks springing forward an hour probably contributed to the time whizzing by so quickly.

I’ve been determined to do something with the sorrel that has been looking amazing in the garden for about 2 weeks now so decided to make sorrel soup for lunch.

To be honest I wasn’t sold on it and while Nigel said he thought it was delicious, he did say ‘it’s not for everyone’ so I’m not giving you the recipe! Sorrel is a bit like spinach but has an intense lemony flavour. It’s great made into a sauce served alongside a piece of salmon. Let’s say that in a soup it has a particular flavour.

I made some rosemary, parmesan and garlic biscuits/buns/scones to go with it. Now, they were delicious. Not really a biscuit, sort of between a bun and a scone. I think the language used to describe them depends upon your origin. Soft and savoury, we enjoyed one each and I’ve frozen the rest to bring out with some soup that I do like another time!

I squished the butter using the back of a fork until the mix resembled a coarse oatmeal style mix and then added one and a half cups of 50% cream, 50% milk (half and half in the US).

I quickly brought that together to form a very wet dough and then on a very floury surface I dropped spoonfuls of the mix onto the flour, coated them so I could very gently form them into balls and popped them into a greased tin.

After brushing with melted butter that went into the oven on 240°C for 8 minutes and then after lowering the temperature to 205°C for another 12 or so minutes until risen and golden.

They were delicious but I’m asking myself why the need for the sugar in the recipe. Next time I’ll leave it out. The recipe came from Baker by Nature.

I caught up with a very old school friend who lives in Switzerland over a coffee. It’s reassuring to swap stories. We updated each other on our families and situations and wished each other the best.

It’s a blowy miserable day here. Blustery and chilly. No walking in the vineyards today.

Worrying stories are coming in about local farmers struggling during the lock-down. You may know that this region of the Loire (Touraine) is very famous for its goat’s cheese. Sales of goat’s cheeses that are sold direct from the farm (ie not in the supermarkets so to individuals, restaurants, at the market etc) have dropped 75% since confinement began.

As markets have shut and people are reducing their shopping trips the impact upon small growers is immense. The famous St Maure de Touraine cheese has seen its sales fall by 70%. A typical artisanal producer would typically sell around 600 cheeses a week. This has dropped to 150 per week at the moment.

There are some good initiatives being developed to try and support local growers with on-line platforms grouping diverse products that can be delivered to your home although they are expensive and in this time of self preservation when everyone is wondering where they will be in six months time, belts are being tightened.

On a happier note Nigel decided to make a cocktail as an aperitif tonight. We enjoyed a Boulevardier (equal parts of bourbon, Campari and red vermouth) in front of the fire before a simple dinner of giant ravioli stuffed with mediterranean veggies and a fresh tomato sauce. The pasta came from the market in Amboise where there is a lovely stall selling a huge range of Italian produce.

Our wine of choice for the evening was Chateau du Petit Thouar’s Amiral 2015. A rich, robust, spicy wine that was great with the pasta.