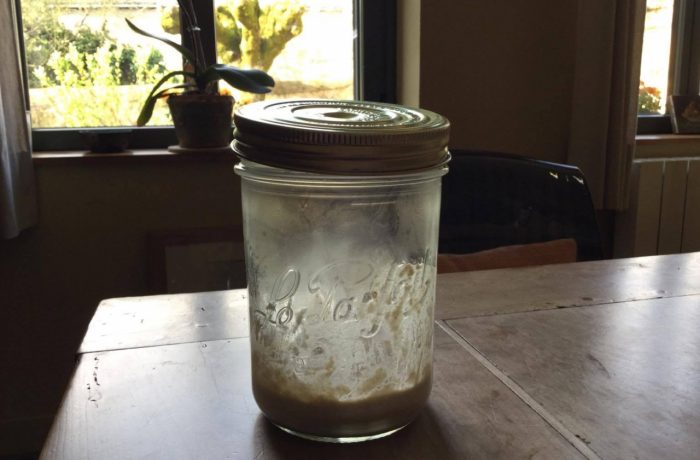 My yesterday’s bread was not voted the favourite so far it has to be said. It rose well and has great flavour but seems a bit dry. They do say (whoever they are), that different flours absorb different amounts of water so maybe that was it. I used locally milled organic flour for the first time. Could that have made a difference?

It did make great toast for breakfast this morning though. Doesn’t toast lift the spirits? There’s something about the crunchy bits around the edges and the melted butter that drips through the holes. Apricot jam for Nigel and yes, the one and only Marmite for me. I daren’t admit how long the Marmite has been in the cupboard. It seems to last forever. I know it’s not for everyone but I love its salty savouriness. Toast reminds me of my school days too. The ultimate snack after a busy day – hot buttered toast.

As my obsesstion with all things bread continues I have decided to have another go at sourdough. This time, I’m making my own starter. I left the one that Louisa gave me in the fridge too long without feeding it so it has died. Why don’t you have a go with me? Start today and we’ll do it together?

You need a pot with a lid, flour (50/50 plain and wholemeal is ideal for making a starter I’m told by ‘The Boy Who Bakes’) and room temperature water. It takes a week to get it going but we all have plenty of time so today is day one.

Put 50g of flour into your pot (25g each plain and wholemeal), add 50ml water (26°C) and stir to a paste. Then, leave it in a dark spot for 24 hours. Put the lid on but leave it a teensy bit ajar so it gets some oxygen. Do this first thing in the morning as apparently it’s better to ‘feed’ it at the same time every day. See you tomorrow for day two!

After a rather dull start the sun came out and we were able to enjoy lunch in the garden. A rather inappropriate broccoli and cheese soup with some hot buttered toast (yes, more toast!). The recipe originally came from Smitten Kitchen. I adapted it very slightly to suit what was in our fridge.

I sweated one small onion and a clove of garlic in a little unsalted butter until soft before adding one tablespoon of flour. After cooking that for a couple of minutes I added 1 cup of milk, 2 cups of light chicken stock and a bay leaf. In went one small head of broccoli cut into tiny florets (including the stem) and one finely chopped carrot.

After simmering for around 30 minutes I blitzed it with the hand held blender before adding 80g (about a cup) of grated cheese (the rather too good Beaufort we have at the moment that cost us over 32 euros a kilo) and stirred it in gently to melt. A little more grated cheese on top to serve. It was delicious.

Beware, long strands of half melted cheese dangle from your mouth to the bowl. Not something to cook for a first date (along with spaghetti Bolognaise)! It was tasty. I would do it again. Maybe on a cooler day next time.

There is much talk on the French news today about masks. Certain mayors around France (Nice, Cannes) are wanting to introduce the obligatory wearing of masks outside the house. This is not something currently under discussion for everyone as there are already problems providing enough masks for those working in the medical profession let alone the rest of the population. We are seeing towns and cities appealing to private individuals that can sew, to help make them.

Parisiens have also been banned from running, jogging or taking exercise outside between 10h00 and 19h00 from tomorrow. Some towns also have curfews in place.

We put the garden table and chairs out this afternoon. After a quick brush down they are now in their summer position on the decking. We laughed at the stupidity of putting them all out as it will likely be just the two of us for some weeks to come. Still, they’re there now, and ready for the many cups of coffee and glasses of wine that will follow when we’re able to see our friends again.

I’m determined not to go shopping again until Thursday when the market is in our next village so I’m having to be a bit inventive in the kitchen.

Tonight’s dinner was a burger (homemade) from the freezer with some little roast potatoes and peas with smoked bacon and mint. It seemed a rather pedestrian meal on the face of it but it really hit the spot.

I saved the oil that we used to make the Tuscan fries the other night (I think I already mentioned that) and decanted it into a bottle that now sits by the hob.

I parboiled some potatoes that I cut into little cubes and then roasted them in the oven with a liberal quantity of the herby, garlicky oil. When they had a bit of colour, I took them out of the oven and squished them with the back of a fork. Squishing them squashes out a bit of the interior (which is fluffy) and increases the surface area so more oil can be absorbed.

Another 15 minutes in the oven and they came out golden and delicious. A liberal sprinking of sea salt just took them to another level.

The humble potato. So good.

Our wine this evening was the delicious Pigeur Fou from Gerald Vallée in the St Nicolas de Bougueil appellation about 45 minutes from us here in Noizay. St Nicolas is Cabernet Franc country and Gerald is one of the top growers.

When you make red wine, you have to keep the skins in contact with the fermenting juice. This is called pigeage (in French) and it literally means to push the solids (skins etc) back down into the liquid in the tank. Gerald has been doing pigeage à pied (using his feet) for several years now for his top wines.

He is the ‘Pigeur Fou’, the crazy guy that does it with his feet! The irony is that this wine (that is named after him) does not have pigeage à pied. It’s made using what we call a carbonic maceration where whole bunches of grapes are put straight into the tank.

Carbonic maceration is used is the production of Beaujolais. It’s a different type of fermentation method that results in wines that are full of fruit and lightish in tannins.

It’s not a typical St Nicolas de Bourgueil at all and all the better for that. It’s a lovely juicy, spicy, fruity wine that doesn’t take itself too seriously but delivers on taste.

Perfect with a burger! Tchin!