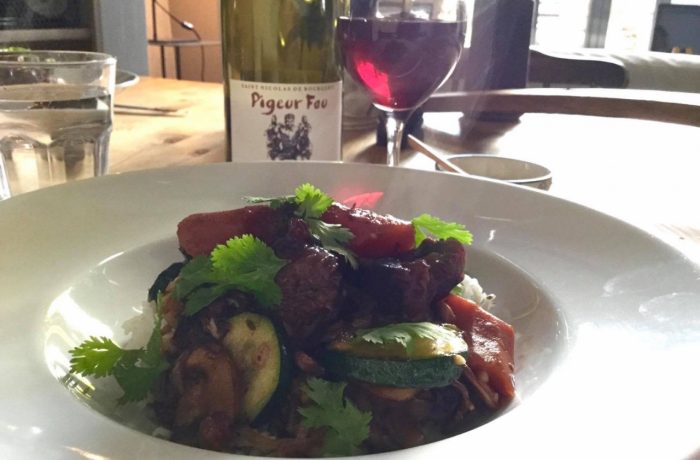 Another day, another loaf . Up bright and early to check on the sourdough. It’s risen very nicely overnight. Now to shape it and prepare to bake.

We enjoyed a Bircher style muesli for breakfast this morning with the rhubarb compote I made yesterday. I went way overboard with the added sugar (Nigella you’re to blame on this occasion) so it lacked what I love most about rhubarb when you get it right. That sweet and sour hit that makes your mouth pucker but is sweet enough to be delicious.

We’ve been eating Bircher muesli in our family for about 40 years (although we never called it that). Way before it became trendy. My parents had a holiday in Switzerland with friends in the 70’s and it was served for breakfast at the hotel where they were staying. Ever since, it’s been my Dad’s speciality and my children will remember helping him with it, stood on a chair from a very young age. We called it Swiss muesli.

Bircher Muesli was developed around 1900 by Swiss physicien, Maximilian Bircher-Brenner for his patients and the original recipe contained apples (the whole thing, skins, cores and pits), nuts (walnuts, almonds or hazlenuts), rolled oats soaked in water for 12 hours, the juice of half a lemon, cream and honey (or sweetened condensed milk).

My Dad would soak the oats overnight in milk and the following morning, the children (still in their jim jams) would help peel, chop and stir the rest of the ingredients. It has to be said that Dad’s version became more and more luxurious as time went on and less and less healthy. He was prone to adding in extra thick double cream as well as lashings of Greek yoghurt and loads of runny honey. There was always grated apple, sometimes raisins (they would be soaked overnight too), banana, pear, raspberries. Whatever was in the fruit bowl or in season. It was delicious.

I see on Instagram this morning that the town of Saumur is putting some initiatives in place to try and support local shops and businesses as we slowly ease out of lockdown. A reduction of 50% on the rent for properties owned by the council, the money generated by the council for pavement sales (cafés, bars, restaurants etc) will be stopped for one year, a new night market will be introduced and free parking in the centre of town. I haven’t seen these sort of initiatives being talked about here in Amboise but I’m sure similar steps will be taken to try and reenergise our community which relies so heavily upon tourism.

Eduard Philippe has addressed parliament this afternoon proposing the Government’s strategy as we move forward after May 11th. It looks like we’ll be able to move around more freely (without an attestation) within our own department (within 100km) and most shops (with the exception of big shoppping centres) will be allowed to reopen (as long as they respect a strict set of rules).

Masks are to be worn on public transport and in elementary schools. Groups of people will be limited to a maximum of 10. Workers that are currently on what we call here ‘home office’ are to contine for the forseeable future and there will be up to 700,000 tests per week for people showing signs of the virus or who have been in contact with someone who has the virus.

Cafés and restaurants will stay closed for the forseeable future with more news expected at the end of May. It would seem that the opening of parks, gardens and public places will vary from department to department.

All these measures, and more, are currently being debated in parliament this afternoon and will be voted on later today. I’m not sure what happens if his plan doesn’t get a majority.

There is of course, one big proviso in all of this. That the numbers remain low and there is no increase in the number of recorded cases over and above 3000 per day.

Sadly the 100km limit means I won’t be able to see Rosie for a while yet. I was hoping we’d be able to invite her over from Angers for a weekend to get some fresh air. It’s been hard for her in a flat with no ouside space. At least she’ll be able to reconnect with some of her friends locally but it looks like she’ll be working from home for the forseeable future.

It’s nearly 19h00 and I’m watching the debate live. I think I need a glass of wine. Supposed to be having a night off tonight but we’ve cracked. Fail.

Dinner this evening was a ‘use up what’s left in the fridge’ kind of event. We had some beef casserole left over from Saturday night so I gently reheated that on the hob. I cooked some basmati rice (1 cup with one and a half cups of water, brought to the boil, heat down to the lowest possible, lid on, cook for 12 minutes, turn off, leave alone for 10 minutes). And for a side I pan fried four sliced button mushrooms until they were brown then added one sliced shallot, 2 courgettes cut into discs and a couple of cloves of garlic.

I now have an empty veg drawer, no eggs, no yoghurts, no desserts, no biscuits. A shopping trip is on the agenda tomorrow.

Thankfully we have a cave full of wine (phew) and we enjoyed a bottle of the ‘crazy foot treader’s’ Pigeur Fou.