Life in the Loire after lock-down. 16th May. Day 6 of déconfinement. 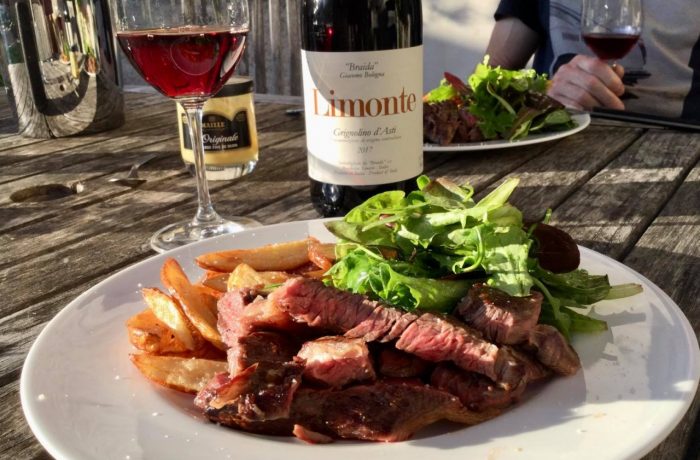 I had the best night’s sleep last night. Was it due to the fact that I got up at half five yesterday morning? Was it the 6km walk through the vineyards? Or was it the little snifter of Cointreau we had while catching up with Nigel’s brother just before bed?

Probably a combination of all those things. Squirrel nutkin was apparently very active during the night. Nigel and Pesto lay there listening while I slumbered deeply alongside them. It’s so rare to have a good night’s sleep these days, I feel rather blessed.

And so off to Vouvray this morning to collect my panier of mini-veg. What delights are awaiting us this week?

An article in the Guardian caught my eye this morning. Single men and women in the Netherlands have been advised to find a ‘sex buddy’ after criticism of the rules preventing home visitors from getting any closer than 1.5m during the lock-down. This is official guidance from the ‘National Institute for Public Health and the Environment’ (RIVM). Contrast this approach with that of the UK where couples are told that they have a stark choice. Either not see each other at all, or move in together straight away. The deputy chief medical officer saying that it ‘should test the strength of their relationship’. Cultural differences eh!

Back with my mini-veg. Included in my panier today: baby carrots in all colours, baby leeks, baby fennel, baby artichokes, baby spring onions, baby radishes in all colours. The radishes are so pretty and the tops still so fresh that I quickly cut them off, gave them a rinse and made a pesto with them adding some toasted pine nuts, a clove of garlic, a little Parmesan and some olive oil. That will be nice served as a dip with our apero this evening.

Nigel is cooking this evening but was waiting to see what was in the panier before making his decision as to what to cook. I think pork might be on the menu.

I scuppered the dinner plans by deciding to make a brioche. In order for us to enjoy it for breakfast tomorrow I had to make it this evening so I rendered the oven out of action. Change of plan for dinner.

A quick rethink required an aperitif in the garden. White port topped up with lots of tonic, ice and a large sprig of fresh rosemary. Really refreshing.

Steak and chips instead, with a side salad and a glass of red.

Nigel bought basse côte which is quite a bit cheaper than entrecôte and just as delicious. He griddled it on a red hot griddle for 2 minutes each side then let it rest for 7 minutes before carving. Some home made chips using new season potatoes and a garlicky dressing on the salad and we were set to go.

Our wine of choice this evening was from Italy. Made by sister and brother team Rafaelle and Guiseppe Bologna, the 4th generation of their family to make wine in the Asti region of Piemonte.

Limonte is the name of a single vineyard on a hillside that overlooks Rochetta Tonaro. The soil is rich in clay and silt (limo) which gives the wine both its structure and its name Limonte.

The appellation is Grignolino Asti DOC and the grape variety 100% Grignolino. The wine is fermented and aged in stainless steel for 4 months and then has another 2 months in bottle before being released to the market.

In the glass it has a bright, almost brick red appearance. It appears light and translucent. The nose is a delight. A mixture of dried cherries and wild strawberries with a touch of smoke and roses. It’s bright and fresh on the palate with fine tannins, great balance and lovely length.

Just delicious! And affordable too.