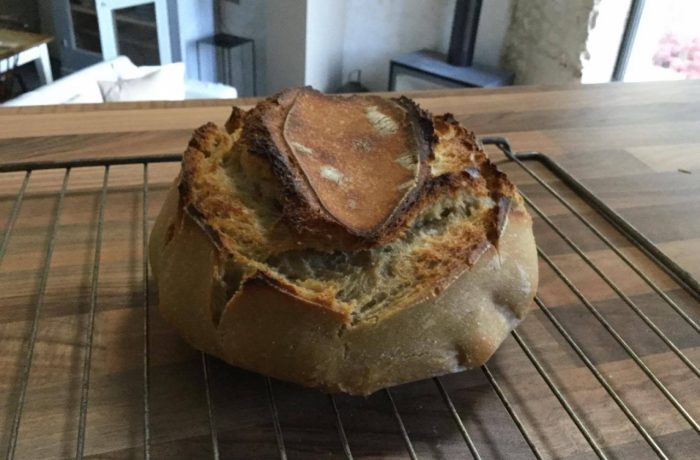 I made two cuts in the top of the loaf (this requires confidence) and in she goes. 20 minutes at 240°C with the lid on, reduce the heat to 230 and another 20 minutes.

The buzzer goes off. In to the kitchen I rush. I open the oven door and out she comes. She smells great but she look, erm, rather like a pork pie rather than a loaf of bread. I think I got a bit carried away with my pre baking cuts. It looks like there’s a lid that you can remove (I had to physically restrain Nigel from doing so).

Still the proof is in the eating. Don’t judge a book by its cover.

Also in the oven this morning is an orange and raisin butter cake. A whopping 250g of butter has gone into that. I’m sure it’ll look quite a humble cake when it comes out. Lurking beneath, that butter will take it to another level.

How sad to read that Graham Kirkham of Mrs Kirkham’s Lancashire (the last farmhouse Lancashire cheese in the world) is in danger of going under. He normally sells 120-130 10kg cheeses a week. The first week of the lockdown he sold 9. ‘How can 9 cheeses run a farm, a cheesemaking dairy and pay 9 wages?’ he says. And Colston Bassett Dairy, reknowned makers of Stilton are in the same situation. These artisanal cheesemakers rely practically 100% on restaurants, upmarket delis and farm shop sales while the supermarket shelves lay empty. They’re furloughing staff, reducing production, drying cows out and putting them to grass.

At least here in France the supermarkets are trying to help local suppliers. And shops that can’t trade themselves are opening up to sell local fruit, cheese and vegetables to keep them going.

Worrying news as Spain lays out its plan for lifting the coronavirus lockdown. It looks like there will be a two stage plan with big businesses, banks and the production sector gradually opening in June and other industries having to wait until the end of the year.

Tourism is responsible for 12% of Spain’s GDP and 13% of all employment. Government spokeswoman Maria Jesus Montero said that ‘tourist activity will not begin until it is safe for visitors and workers.’ I imagine there will be a similar approach here in France.

A simple lunch in the garden. A sandwich made with my sourdough bread and some ham off the bone. Verdict on the bread. Very good indeed. Despite it looking like a pork pie, the flavour is excellent, it’s moist and the crust is nice and crunchy. In terms of flavour the best loaf yet. Work to be done on my pre-baking cuts and shaping. Nigel is now losing track of my bread making efforts (or is it the will to live?).

I prepped this evening’s dinner in good time so we could enjoy an apero in the garden again. Slightly strange weather today with full sun followed by grey clouds and the threat of rain. We really need rain.

Onglet is a French cut of beef for which I don’t know the English translation. I think it’s hanger steak or sometimes it used to be referred to as the butcher’s cut. It’s part of the diaphragm muscle and must be served rare or it’s as tough as leather. It’s super tasty.

I pre-boiled some small cubes of potato to roast off with herb oil and fresh rosemary later and washed a big bowl of fresh spinach (keeping back the really small leaves for a salad another time). The onglet came out the fridge and was well seasoned with salt and pepper a good few hours before cooking.

The potatoes went into a 200°C oven while we enjoyed a gin and tonic in the garden. After 20 minutes (when they were becoming golden), I put the griddle on the hob to heat up. Onglet needs to be cooked quickly and at a really high heat. That way you get a lovely dark caramelised outside and it stays lovely and rare in the middle. A couple of minutes on each side and off to rest for about 5 minutes.

Nigel made a herb and shallot butter a couple of months ago. It was delicious but too much for the two of us so we put the rest in the freezer. I cut off two big pats (basically, butter, cooked shallots, tarragon, chives) and allowed them to come to room temperature. As the onglet came off the griddle, I put them on a warmed plate and placed the pats of herb butter on the top. As the steak rested, the butter melted with the juices to form a delicious sauce.

I cooked the spinach in a pan without any additional water. The water that clings to the leaves after washing is more than addequate and even then, I squeezed out the excess before adding a large knob of that delicious salted butter I bought from the market last week.

And so to table. A pile of fresh buttery spinach in the bottom of the bowl, a generous sprinkling of crunchy rosemary roasted potatoes and the sliced beef on top with the buttery herby juices poured over.

Our wine of choice this evening was the ‘crazy foot treader’s’ top wine. L’Envolée from Gerald Vallée in the St Nicolas de Bourgueil appellation. Tonight we opened his 2011, a hot year in the Loire that produced very fruit forward wines. 9 years later the colour is starting to change moving away from purple youth to brick red and it’s incredibly soft on the palate. Primary fruit flavours are moving away and more savoury notes and dark fruit coming in. A bit of a treat for Saturday night.