Life in the Loire on lock-down. 13th April. Day thirty. 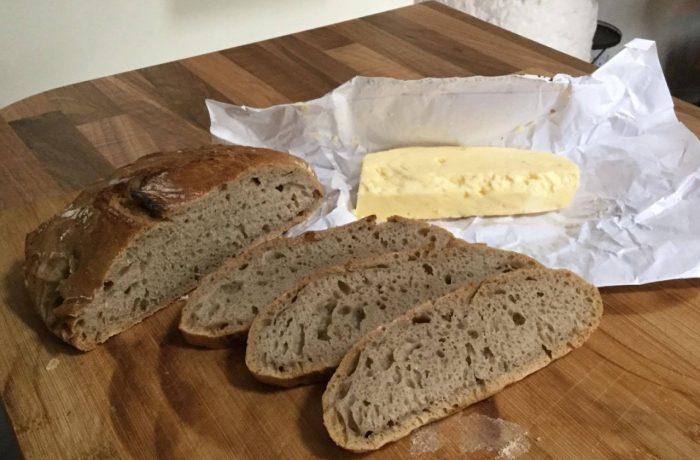 A rather cloudy start to the day brightened by the first sighting of a Hoopoe in the garden.

Hoopoes are such beautiful exotic looking birds with their distinctive crown of feathers and long beak that they use to probe the ground for grubs and insects.

We had a couple last year that had a nest near the house and were wondering if they would return after their winter in the tropics. Apparently they are monogomous but the pair bond only lasts for one season so maybe not. It’s Israel’s national bird and they were considered sacred in ancient Eygpt.

Sally starter was looking a little more enthusiastic this morning. Seemed a shame to tip her out and start again as lots of bubbles suddenly goes down to one or two again. It’s like raising your hopes and then dashing them every day. Making a starter is emotionally draining.

We had a lovely catch up with our friends Mark and Sharon in the UK over a coffee. They manage a really beautiful country pub in Gloucestershire. One of those picture postcard pubs nestling in the valley bottom in a gorgeous village with lots of stone houses and labradors. It’s the heart and soul of the village and they play a really important role in village life. Normally that is. The pub is closed. Noone can sit outside and enjoy a pint of local beer at the moment.

Luckily for them, like us, they’re in the heart of stunning countryside and so have access to lovely scenery for a walk. Sharon is also running a ‘soup kitchen’. She makes soup every Friday and delivers it to around 30 elderly or isolated people in the village. That’s a rather lovely thing to do isn’t it?

There has been much discussion (she exaggerates slightly), about how long to cook the egg for a Scotch egg. I’m reliably informed that the perfect time is 6 minutes and 10 seconds exactly. So now you know.

Lunch today was the last of the Scotch eggs for Nigel (I’ll need at least six months to get over the trauma of making those before I have another go), and for me, the last of the carrot and tarragon tart. I also had a slice of home made bread and fresh butter from the market.

Butter is a real weakness for me and this butter is addictive. It has little crystals of sea salt that give it crunch when you bite into it. I could just eat bread and butter for lunch when it’s a good as this. When I was little, my Grandma (we used to call her Nanna), used to buy farm butter every week from Mrs Gash at the market in Lincoln. It was similar – creamy and dense with little watery pockets and crystals of salt. Heavenly.

In an attempt to cut down on the alcohol consumption I’ve made a batch of Fiona Beckett’s NG&T syrup this afternoon. That’s a ‘Not Gin & Tonic’ syrup. 400g of sugar goes in the pan with 475ml of water and to that you add the peeled rind of a lemon and lime (untreated if possible) and 15 lightly crushed juniper berries.

After 10 minutes of gentle simmering you turn it off and leave it to cool than strain into a bottle. Tomorrow night’s apero will therefore be a Non Gin & Tonic made using the syrup.

We’re notoriously bad at finding interesting alternatives to alcohol and so our nights off feel like hard work. Wine plays such an important part of our lives and our favourite moment of the day is when we sit and have a glass of wine before dinner.

A brief walk up in the vineyards late afternoon blew the cobwebs out. The vines are really pushing now that the weather is warmer.

Trying to be organised tonight as we want to be sat down ready for Macron’s speech. The pandemic has caused 14,393 deaths in France. The number of patients in intensive care has gone down for the fourth consecutive day. Rumours are flying around as to what he might say but the bets are on for extending confinement until mid May at least.

Dinner tonight was some grilled chipolata sausages with courgette and corn fritters and a sriracha and Greek yoghurt sauce. We finished the magnum of Bourgueil 2009 which was tasting soft and delicious.