Life in the Loire after lock-down. 24th May. Day 14 of déconfinement. 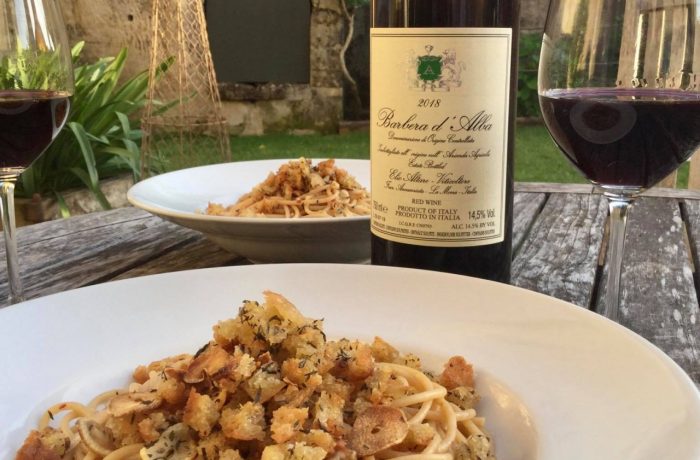 After the trauma of being breathalysed last night I woke up bright and early and enjoyed an hour listening to the birds with a large cup of tea.

Another sourdough loaf has just gone in the oven. Sunday, here we go. The sun is shining and I’m feeling good today.

Mission today is to try out a recipe we fancy. We normally struggle to try out new recipes during the summer months as we’re too busy. Not this year.

But no new recipe for lunch. I returned to an old favourite. Pan-fried Halloumi with a caper, lime and coriander dressing. Halloumi is notoriously difficult to find here in France so I brought it back from England (in October 2019 would you believe – don’t worry it has a very long use by date). It has sat in the fridge ever since destined for this very dish. Very much a summer lunch, it wakes the palate with its bright sharp flavours.

This afternoon we drove down to our friend’s house in the next village to pick cherries from their tree. As we drove along the ‘coteau’ (the limestone ridge) we noticed how the potagers all along the way have planted their tomatoes now. I love the way people grow things in France. Well in the countryside they do anyway. Even the tinest gardens make way for a few herbs or vegetables, a row of raspberries or a few courgettes.

Along the river road where the houses opposite each own a strip of land, the vegetable plots are a bit more serious. Rows and rows of tiny lettuces, potatoes, courgettes, aubergines, flowers for cutting, tomatoes and herbs. Tended by eldery men (mostly) wearing blue trousers and sporting caps, often with walking sticks. They proudly pass their days planting, hoeing and watering, thinning and then harvesting their own produce.

And then, (for the most part), the eldery ladies come along and gather the produce which they take home. Raspberries and strawberries are made into jams and tarts, courgettes, aubergines, onions and peppers turned into ratatouille, green beans picked and preserved, excess fruit and vegetables put into pickles and chutneys. Nothing is wasted, everything is either eaten or preserved.

This is the rhythm of life in the Loire. And we love it.

We were laughing with each other. Nigel is the one who does all the gardening. I like to garden too but have other things to occupy my time at the moment. We were wondering if we would be the same when we are old. “But you do the gardening so I won’t have a potager will I?” I said

“Of course you will” he replied. “We’ll each have a potager”.

And I laughed “A neat and tidy one with everything in perfect rows and all the canes that support the tomatoes at the same height in yours, and a ramshackle disorderly one with random fruit and veg in mine”.

“That’s right” he said. We’ll have them labelled so there can be no confusion. Nigel’s potager and Cathy’s potager”.

I don’t think we’ll need a sign. Everyone will know whose is whose.

We arrived at the house and drove up the windy path from the road. The grass was long and blowing gently in the wind as it brushed the underside of the car. The old cherry tree was there on the right hand side.

Not a cherry in sight. We were too late. Someone else got there before us. We could see the long grass had been trodden down around the trunk of the tree. French people are such foragers. This would have been an opportunity they wouldn’t miss. Knowing the owners of the house were not there they would seize the moment and harvest the fruit. I don’t blame them.

So we took a walk around the garden of the house, the long grass brushing against us as we took a few photos to send back to our friends. The trees they pollarded last year are pushing back and amongst the undergrowth we found scented roses climbing against the wall and a sea of wild sweet peas on the ground. Calm and still, I picked one single sweet pea to bring back home.

Nigel is cooking tonight. A rustic Italian pasta dish with crunchy breadcrumbs, garlic and anchovies. Just my sort of thing. But now, it’s time for an aperitif in the garden.

A little blind tasting or should I say vintage spotting to be more precise. We love Peter Hahn’s wines (Vouvray) and he makes tiny quantities each year, each one being very much driven by the vintage conditions. Some years he makes a very dry wine, some years just off dry and some years it can have quite a bit of residual sugar. Which year was this?

Golden in the glass, that was a clue. It has some age. Hmm, what about the nose? Rich and intense with notes of wild honey and orange blossom, ginger, turmeric, tilleuil and quince. It smells amazing. Now to taste. Mmm, delicious. Luscious and full, definitely some residual there but how much? I rule out the 2013 (very dry) and the 2011 (I know that has 11g of residual), then rule out the 2015 (which has around 65g).

I plump for 2016. Wrong. Nigel reminds me that I said it had some age, the colour is really golden. It’s older than that. It’s the 2010 which has 40g of residual. There was some botrytis that year, mostly in his east plot. It has beautiful balance and wow, that acidity. I would never have guessed the level of sugar. It’s dangerously good. We sit and sip it in the evening sun in the garden.

And so to dinner. First Nigel made pangritata (fried sourdough breadcrumbs with garlic and fresh thyme leaves). Then, he cooked some wholewheat spaghetti and while that was cooking fried a couple of cloves of finely chopped garlic in a little olive oil. When the garlic was soft he added 8 anchovy fillets, the juice of a lemon and a teaspoon of dried chilli flakes. The spaghetti then went into the pan along with a little cooking water and then the crispy breadcrumbs were sprinkled on top to serve.

It packs a punch but you can always back off on the chilli if you like (or maybe cook something else!).

To go alongside we chose an Italian wine. A Barbera d’Alba 2018 from Elio Altare. Dense and packed with dark cherry fruit and spice it has moderate tannins and pronounced acidity (which we love and is classic for this grape variety). It’s probably a bit young at the moment but went well with the pasta. You have to be careful with tannin levels if you have chilli heat as chilli exaggerates tannin.

Elio Altare was one of the leaders of the Barolo revolution, switching from using huge wooden tanks to small French barriques. He fell out with his father about this change of direction and was disinherited as a result. Today, the estate is around 10ha and makes around 70,000 bottles. Still in family hands Elio’s eldest daughter Silvia works alongside him.

Just enough time to fit in an episode of After Life on Netflix, grab the tissues and have a quick weep before bed.