What’s going on in the vineyard in April? 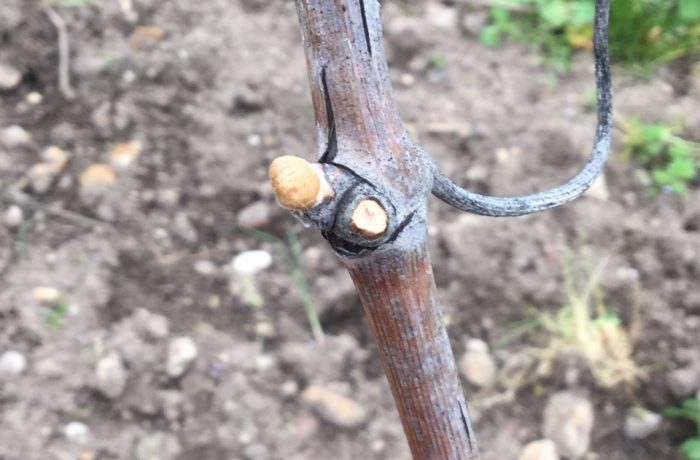 We are now in the second week of April and growers are on tenter hooks waiting for budburst. Friday the 6th saw temperatures rise to 23° and the vines are certainly on the starting blocks now depending upon location and grape variety.  Generally things are sprouting back to life later than normal this year.

The beautiful wisterias that are so characteristic of the Loire are normally in flower by now but they are still not showing themselves. We’ve had a lot of rain in the past few weeks and more is forecast for the week to come but from the end of the week, temperatures are set to rise to 18° and remain between 18° and 23° (64°F – 73°F) for the coming week so this will kick the vines into action.

Signs of budburst have been seen in the Muscadet region and in Saumur Champigny but there was little sign of it in St Nicolas de Bourgueil yesterday (the 9th). Meanwhile, growers are replacing dead or diseased vines with new ones and putting in stakes to support replacement vines that are now 2 years old.

Many appellations have installed new and additional measures in order to limit the crippling damage that comes from a late frost. Both Saumur Champigny, Chinon and St Nicolas de Bourgueil have invested in new eoliennes (machines that distribute hot air) and Vouvray and Montlouis have been sending up helicopters over certain parcels to ascertain the level of protection this new method can offer. Chinon announced last month that its 181 growers have invested around 3 million euros this year to better protect themselves after 2 disastrous years. Over the 2 previous years, it’s estimated that that losses amounted to around 25 million euros for the 181 growers. 4 different methods of protection are used: ‘bougies’ or candles and mobile systems that can be moved around the vineyards, aspersion (whereby water is sprayed over the vineyards to create a protective film of ice that protects the buds) and eoliennes (anti-frost wind towers) that push hot air from higher up, down towards the ground. These ‘tours antigel’ protect around 4 to 5 hectares and are the most common form of frost protection used in the region (at a cost around 45,000 euros for 4-5 days use per year).

The next couple of months will be crucial. Yesterday one grower reported an old wives tale that if we have storms in April, there will be frost in May. We just have to hope that this doesn’t ring true.