Life in the Loire after lock-down. 5th June. Day 26 of déconfinement. 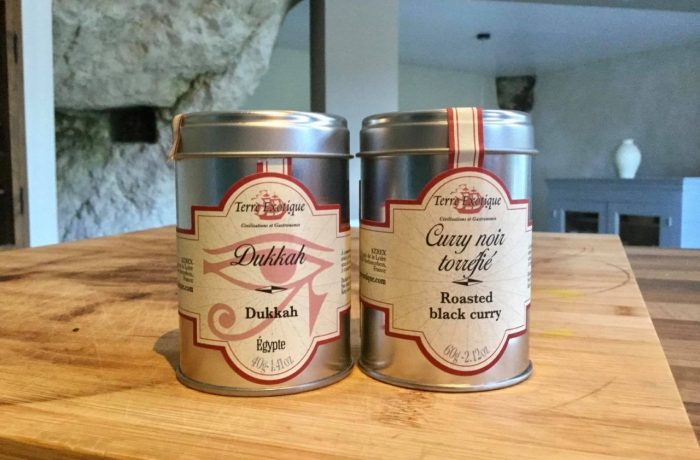 The bad news this morning is that I can’t bend down far enough to put my socks on. The good news is – I don’t have a headache. Hooray!

After collapsing onto the yoga mat at the end of the bed and eventually managing to run through a few exercises to loosen up a bit, I managed to manoevre myself into a chair and get dressed.

It’s the first hour after you get out of bed that’s the killer when you have a bad back. Once I’ve got going I’ll be fine.

Breakfast this morning was scrambled eggs on sourdough toast with crispy bacon, blood orange juice and heaps of coffee. Just the thing after a late night. I grilled the bacon and then popped the slices of sourdough in the pan when it was done so the bacon fat seeped into the bread as it toasted. Probably not the best option for anyone counting calories.

John and Sheila are keen to visit one of our local culinary hotspots,. Terre Exotique in Rochecorbon (close to Vouvray). It’s a beautiful elegant country house that is a spice haven. Thousands of peppers, spices and curry powders, beautifully packaged in little silver tins. I try not to go too often as it’s such a foodie paradise.

You go in with the sole purpose of purchasing something you need (in this case for John it was Spanish smoked paprika), and come out having spent a fortune on a variety of things you decide are essential to life. I always cast a wistful glance as we drive past. Nigel speeds up so there is no chance of stopping. A girl can never have too many spices in her spice cupboard non?

Just as we parked the car there was a roar in the skies above us. Four Alpha jets flying high above. An emotional moment for the families and friends of the pilots, this was the last flight for these planes, a final adieu before retiring after 41 years of military service. So pleased we saw it. It caused quite a stir. The skies have been so quiet recently.

The experience at Terre Exotique has had to change of course. Before the virus, each spice or mix had a tester that you could pick up and smell. So many of the spices and peppers are unfamiliar that being able to look at them, smell them, and in many cases taste them made all the difference. As well as the spices there are maple syrups, fruit cordials, coffees, teas, vinegars, oils. It was a sensory experience of looking, learning, smelling, tasting. That has had to go of course.

Hard for the staff. Are you going to buy something that you are completely unfamiliar with if you can’t even smell it? I’m sure people will revert to purchasing the spices they are familiar with.

I managed to engage self control coming out with some Dukah (a mix of seeds and spices traditionally mixed with olive oil and eaten with pitta bread in middle eastern countries), a Roasted Black Curry mix from Sri Lanka and a grapefruit infused oil (that will pair perfectly with fish).

Back home and upon checking email I see that one of our tasting cases has already been delivered to a customer in the UK. Wow! That was quick. We only packaged them up and sent them off on Wednesday and it was delivered on Friday. Impressive.

Sadly, one of the fall-outs for wine producers since the lock-down has been the dramatic fall in sales as their normal channels have closed. This has led to huge surplusses that are clogging up wineries as we move towards harvest. France has authorised the transformation of 200 million litres of wine into hydroalcoholic gel. This exeptional measure, passed by Brussels and funded by the EU will give growers 78 centimes a litre for Appellation wine and 58 centimes a litre for table wine.

I do find this a bit depressing. The local growers we work with are unlikely to be the ones most affected. This is something that the bulk producers are likely to take advantage of but all the same, it’s people who have worked hard to produce a product that remains unsold due to the current crisis and 78 centimes for a litre of wine won’t even cover the costs of production. Better than nothing I guess.

Moving on to something more cheerful. Another story caught my eye today that made me smile. A farmer in the Vosges who has 25 cows that produce Munster cheese, has produced a new cheese by accident. Lock-down has been particularly difficult for artisan cheesemakers as sales plummeted.

Lionel Vaxelaire left a batch of Munster cheeses in his cellar and forgot about them for a month. When he retasted them he discovered they had developed a completely new flavour and a greyish greeny mould on the outside. Traditional Munster cheese is normally washed every day so these cheeses were just left to their own devices.

Apparently, it’s delicious. Locals are loving it so much that he’s decided to keep on making it and has amusingly named it ‘le confiné’, the locked-down!

So many delicious things have been created by accident. Other things that spring to mind are Champagne, Roquefort, Pineau des Charentes, Maderia and the wonderful upside down apple Tarte Tatin (a Loire speciality).

Dinner this evening was the last of the spicy beef casserole from Friday night (all the better for having been in the fridge for a day or two), the last of the Aisan slaw (I added a bit of extra dressing), the last of the fried onion and flaked almonds (that dressed the roasted aubergines last night) and some steamed Thai rice. A bottle of the trusty Côt Côt Codette alongside.

For some reason it feels like Sunday. Maybe because it’s normally a Saturday night when we get together with John and Sheila. This is very confusing, it’s only Friday. Oh well, all the days seem to merge into one another at the moment.