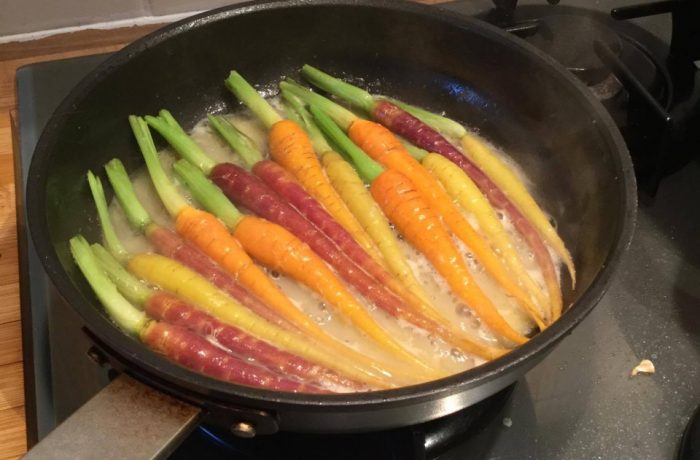 I think we’re losing the capacity to speak. It must be the lack of contact with the outside world.

This morning, while having breakfast, (plain porridge for Nigel, less porridge but with squidgy soaked prunes and honey for me), Nigel looked at me and said, “That’s amazing isn’t it”

I looked towards the window (because that was where he was looking) and agreed. I couldn’t find the words either. “Yes, err ‘that’ really is amazing”.

We were both talking about the orchid for which neither of us could find the word. What’s happening to us?

It is amazing by the way. Second year on and it has fifteen big white waxy beautiful flowers that are lasting and lasting.

As for us, if things go on much longer I think we’ll just end up grunting at each other like neanderthals. We seem to understand each other despite the lack of words.

The birthdays keep rolling in. Today is Pesto’s first birthday. Happy birthday to her. I bought her some Catisfactions as a special treat (inspirational name whoever thought of that one).

We ‘chose’ Pesto when she was just a few days old. Her Mum Cornflake was a beautiful ginger and had a litter of four, 2 cream coloured and 2 multi coloured kittens. How to chose? They were so tiny when we went to visit them, still with their eyes tightly shut. Her family already had a name for her. She was little Miss Pirate (because she had a black splodge over one of her eyes).

A few weeks later, we went to collect her and brought her home. Renamed Pesto, she’s a great character and very much a part of the house. Long may that continue.

Juliette popped over (at a distance of course) to pick up some of Sally starter for Peter to get going with the sourdough. They also ordered a panier of those wonderful mini-vegetables this week so we did some mutual ‘ooing and aahing’ about how gorgeous they are and discussed what we’d each been cooking. Peter was busy treating the vines. Rain is forecast tomorrow.

Talking of the mini-vegetables, today I roasted the mini beets (various colours) along with some unpeeled cloves of garlic, lots of fresh marjoram, some good olive oil and a little white wine vinegar (it should have been balsamic but we’ve run out so I used some Muscat vinegar from the South of France that has a sweetness to it). That all went into a foil parcel and then in the oven for about 35 minutes.

I finely sliced the remaining radishes and the baby spring onions, mixed them with some cherry tomatoes cut into quarters and made a light mayonnaise.

A couple of slices of ham off the bone and some slices of sourdough made a tasty lunch in the garden. We dunked the bread into the scented olive oil and squished the garlic purée out of its skin, spreading it on the bread. As it’s Sunday (our excuse anyway), we had a glass of Alain Robert’s Ammonite Vouvray 2017. A small batch Chenin Blanc that has been fermented and aged it oak it’s beautifully balanced and rather Burgundian in style.

As we ate our lunch we noticed two or three swallows darting into the cave by the wine cellar. There seemed to be quite a kerfuffle going on. Perhaps they’re building a nest in there? There are one or two old ones in the crevises. Do swallows return to an old nest to lay their eggs? I’m not sure.

Talking to Rosie this afternoon, she has been champing at the bit to get baking something from her new book. No sooner said than done and she’s sent through a photo of an apple rose tart that frankly looks amazing. Wow! She must take after her mother (joking!). Seriously though, look at it.

Nigel cooked this evening. I bought a rather lovely looking Challans Noir chicken a couple of days ago which I jointed this afternoon. The legs were destined for a classic Forestière but went in a slightly different direction as you’ll see!

He soaked 10g of dried mixed wild mushrooms in a cup of boiling water and browned the legs in a sauté pan before putting them to one side. In went one finely chopped onion, which he sweated for a few minutes before adding a couple of carrots (the little stubbie ones in the mini-veg panier) and a handful of smoked lardons.

The pan was then deglazed with a couple of tablespoons of Marsala and then in went some chicken stock, the soaked wild mushrooms and their liquor. After simmering for about 10 minutes he put the chicken back in the pan and tucked in some small new potatoes cut in half longways.

That all simmered gently on the hob for about 35 minutes. About 10 minutes before the end, he fried some quartered button mushrooms until all the water had evaporated and added them to the pan along with about 75ml of cream.

In a separate pan he cooked the multicoloured carrots in a little water and unsalted butter. When the cooking liquid had reduced leaving a buttery glaze, he added another knob of salted butter for good measure.

And to serve. The potatoes, mushrooms and a generous amount of sauce in the bottom of the bowl, a chicken leg on top and then the beautiful mini-carrots placed carefully on the top. A sprinkle of flat leaf parsley. Service.

I think Nigel’s cooking of the mini-carrots was more successful than my attempt yesterday. He managed to retain the lovely fresh green colour in the tops (I didn’t). It might be down to the fact that I cooked them in a mixture of orange juice and butter rather than water. Carrots take longer to cook in the presence of acidity (think how your big chunks of carrot don’t turn to mush even when they’ve been cooked for hours in a Bourguignon).

Our wine of choice this evening was Arnaud Lambert’s Montée des Roches 2017 Saumur Champigny. What a lovely wine that is. Beautiful fruit and freshness, balance and just – well, dangerously easy to drink. I just don’t get people that don’t like Cabernet Franc.