Life in the Loire on lock-down. 24 April. Day forty one. 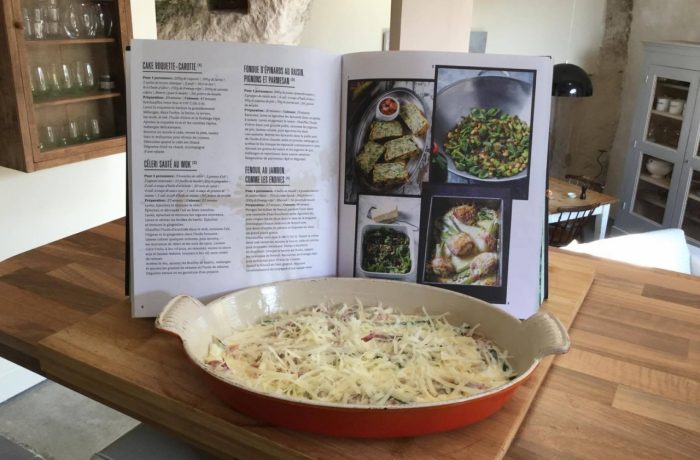 I’m happy to report that Maurice the mouse is still fit and well. I caught a glimpse of him late last night as he came out to munch his daily rations.

Maurice lives in the Atelier (workshop) in the garden. The back of the workbench is made of wood and in the wood on the right hand side there is a hole where a knot has come away. This is his entrance point.

In the middle of the workbench sits a little ceramic dish. Every day, Nigel puts a scoop of food (actually it’s the bird food) in the dish and every night, Maurice comes out and eats it. All of it.

He clearly has a preference for sunflower seeds. And he leaves a trail of husks that takes him from the right hand side of the bench to the far left corner where there is a big pile. This is his exit point.

He’s very cute and we do have a sharp intake of breath every time Pesto proudly brings us another kill. Is it Maurice or is he still safe? Well, he’s still safe. For the moment.

This morning’s sourdough loaf is more pleasing to the eye than my last week’s pork pie. I used Nigel’s Stanley knife to make the cuts and was very careful not to go too deep. It still erupted in the middle but in a rather more elegant way.

After a rather humiliating experience with Jana in the bedroom a couple of days ago, for the past two days I’ve done a little Yoga with Adrienne. I’ve dabbled with Yoga over the years but have always struggled with the gentleness of it as a form of exercise.

Oh yes, it’s gentle. That soothing voice leads you to a calm safe place. And then puts you into the most obscure position (gently of course) and asks you to hold it. As your entire body begins to shake Adrienne then asks you to concentrate on your breathing.

That said, I’m rather proud of the fact that I can get my feet flat on the mat in ‘downward dog’. I’ve committed to doing 30 days with Adrienne (whether they will be consecutive or not I can’t promise).

Today however, I’m upping the tempo and going back to Jana for a bit more punishment later on.

For lunch today I cooked the baby violet artichokes with half a bunch of asparagus. I find normal artichokes ‘a bit of a clat’ as my Mum would say. You have to strip so much off them and they oxidise the moment you get the knife anywhere near them. Getting the ‘choke’ out of the artichoke is a faff and then if they’re not fresh, they’re tough as anything.

These little babies were easy to prepare. I chopped off the top third, trimmed the stalks (which were very tender) and then stripped off the outside leaves to reveal the more tender ones inside. Before I started I squeezed the juice of a lemon into a bowl and added 2 tablespoons of good quality olive oil, 2 tablespoons of water, 2 finely chopped cloves of garlic and a generous sprinkle of sea salt. As I prepared each one, I cut it in half lengthways and dropped it straight into the bowl. No need to remove the choke from these babies as there is no choke.

I added the asparagus to the bowl giving it a quick coating in the marinade and then heated a non-stick frying pan on the hob. When it was hot I poured everything in and turned the little artichokes so their flat side was face down. After the water had evaporated (a couple of minutes) and the artichokes/asparagus had become golden I added a little more water and then put a lid on so they would steam. A couple more minutes, I turned them all over in the pan, added a little more water and a couple more minutes of steaming. That’s it.

I served them in a bowl with some more good olive oil poured over the top, a sprinkle of salt and a slice of this morning’s sourdough. A light and delicious lunch for two.

So, after a brief snooze (well why not), it was back to Jana for an hour before prepping this evening’s dinner. I opted for Jaana Rhythms Full Body Toning. “First we target your upper body, then your lower body, then the whole body”. Sounds ok.

Just as I’d got into the swing of things the internet connection died on me. It happens often and requires shutting down anything else that could be connected in the house. I ran downstairs and disconnected my laptop, Nigel’s laptop, checked the phone then back upstairs to close down any other apps open on the ipad all the while trying to retain some sense of exercise. A couple of minutes later while I am jigging around in a rather random manner, back she comes with “We have bounce, bounce, bounce. We’re moving on to the total body”.

We caught up with Nigel’s brother and family just before dinner. Worryingly, 3 of them have been quite poorly, with many of the classic symptoms of the virus. They’d been to one of the new testing centres in the afternoon but are not at all confident they’ll get the results as the technical side of things was not working properly. As they came in to be tested, journalists and paparazzi with big cameras and long lenses were clicking away.

Of course, we’ve never experienced anything like this before. Worrying situations yes, but not like this. I don’t mean the virus itself, I mean all the consequenses that will follow, and for everyone. Will we still have a business? Will my children come out of this with their jobs? Will our parents be ok? Will Nigel’s brother and his family come out of this ok? It’s everyone, all at once.

I dug out Alain Passard’s ‘Legumes’ and found a recipe for fennel baked with ham, cream and cheese sauce. I’ve been cooking leeks wrapped in ham with a classic cheesy bechamel since I was in my late teens so this appealed. In his recipe you cook the fennel for 5 minutes and then wrap it in slices of ham. I was using the mini fennel so decided to use prosciutto instead. I also quickly steamed the mini leeks and wound strips of ham around them.

The cheese sauce was much simpler (and much richer) than a classic bechamel. A generous amount of cream (I did use ‘light’) is poured into a saucepan with 40g of butter. When the butter melts you whisk it together, season well with salt, pepper and lots of freshly grated nutmeg. That’s then poured over the fennel and leeks and then about 100g of grated Beaufort is sprinkled on the top.

It then goes in the oven for 25 minutes until golden and bubbling.