Life in the Loire after lock-down. 14th May. Day 4 of déconfinement. 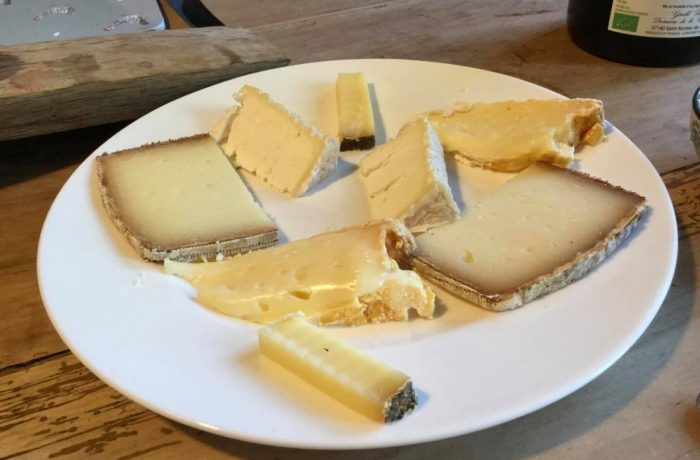 We ventured into Tours today for the first time since the lock-down. Two things felt strange, firstly, being together in the car (we’ve not been able to go shopping together for 2 months), and secondly, driving so far.

So far she says. It takes about 25 minutes for us to get to the centre of Tours but it’s the furthest we’ve been since the lock-down started.

There was quite a bit of traffic on the roads and parking in Tours was tricky. It’s difficult for us at the best of times. Having a 9 seater van isn’t the most practical of vehicles when it comes to city driving and all the underground car parks are out of the question. Anyway, we eventually found a spot and made our way to Les Halles to buy some cheese.

Les Halles was pretty quiet. A few people perusing the wine bottles in the wine shop, one or two at the butcher’s counters, no-one at France Fromage.

We wandered up and and down deciding what took our fancy and settled on; a Chabichou (goat’s cheese), a little Fumaison (a smoked sheep’s cheese), half a Livarot (smelly washed rind cow’s milk cheese) and last but not least, a slice of Marechal (a hard, very fruity cheese from the Vaud region of Switzerland). Can’t wait to have a little for lunch. It’s a while since we had some really good cheese. We’ve missed it.

On the way out we called briefly at the spice shop to pick up some smoked paprika (it’s hard to find locally), some olives for our apéro and 100g of candied orange rind (I’m going to have a go at making a brioche with that).

And that was it. All over in about 15 minutes. Nowhere to stop and have a coffee, nowhere open to sit outside and have a beer. Our first outing in two months. Time to go home again.

We did pop in to Leroy Merlin to pick up one or two DIY things on the way back. The shopping experience is very odd. Everyone waiting in line to pay, crosses on the ground marking where to stand. Everyone wearing masks. We can’t understand what the cashier is shouting at us as we’re waiting in line. “Quarante quatre” was she saying? “What?” No that wasn’t it. “Carrot umpere?” No, still can’t get it. She eventually takes her mask off and says for the third time “carte bancaire?” Ah, oh, got it at last. Come forward if want to pay by carte bancaire. Up we go and use the automatic tills where you scan things yourself. Payment ‘sans contact’. Beep, out comes the recipt, off we go. Us out one side everyone coming in on the other side. Squirt, squirt, disinfect hands, don’t touch your face.

I’m not sure I like this new normal very much.

News from the Government this afternoon. Restaurants will be able to reopen from June 2nd. How and with what restrictions has yet to be announced. And French people will be allowed to go on holiday from July 1st as long as they stay in France or one of France’s other territories abroad.

Schools are slowly reopening as the week goes on. Some have opened and promptly shut again, unable to cope with the social distancing requirements. Locally, the children are having to stand in line with their class on a marked spot until called in to the school. Each child then has to wash their hands for 2 minutes before being allowed into class. And in the playground, each child is being allotted a personal space. How on earth is that going to work? These children are 8 years old.

Determined not to go out a second time today, dinner really was a storecupboard special. I soaked some wild mushrooms in hot water for about and hour and used them to form a base for a rich, savoury, creamy pasta sauce.

I finely chopped and gently fried 3 shallots and 2 cloves of garlic until soft, drained the mushrooms and finely sliced them before adding them to the pan. After a couple of minutes I poured in the soaking water (draining it through some kitchen roll to remove any gritty bits) and let that reduce before adding about a glass of wine (the Crémant de Loire we enjoyed as an apéro). When that had reduced I poured in about half a cup of thick cream and a few tablespoons of finely grated Parmesan.

In a separate pan I cooked a generous amount of orecchiette for 12 minutes. I drained the pasta and kept back some of the cooking water. The pasta went straight into the sauce and I cooked that on the heat for a further minute or two, adding a little of the cooking water and a bit more Parmesan cheese.

A very simple but tasty dinner. Rich and savoury, a real umami hit.

And then cheese. Some lovely cheese. Aah. That’s better. Life is good with cheese in the house. They were all tasting fantastic. The best cheese we’ve had in weeks.

We drank a bottle of the crazy foot treader St Nicolas with the pasta. A great match. Rich spicy Cab Franc, all juicy and fresh.