Life in the Loire after lock-down. 12th June. Day 33 of déconfinement. 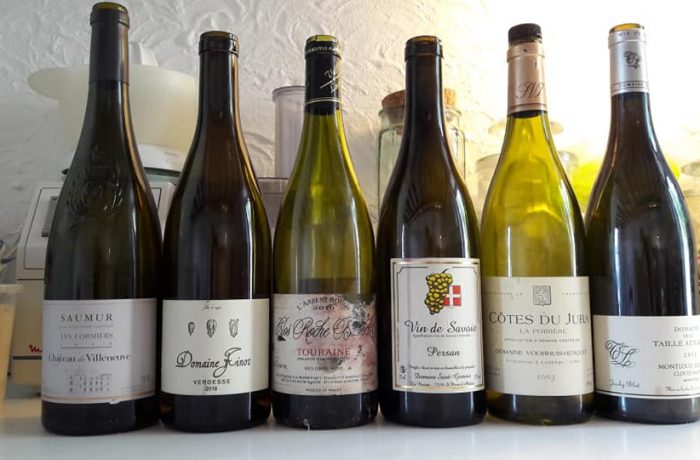 Up early to bake a loaf of bread and then a quick dash round to Louisa’s to check email and write the blog! Still no internet.

Back home, quick cup of coffee and then off to Epeigné les Bois where we are having lunch with Jim Budd, his partner Carole and Wink Lorch.

It’s been an age since we caught up with Wink. The last time was at our old house in Cumeray and she came with her partner Brett Jones, another wine trade friend from long ago. Sadly Brett passed away in 2018. It’s been hard for Wink. She was just in the process of writing her second book, Wines of the French Alps when Brett was at his lowest.

Sadly, despite taking many of the beautiful photos in the book, he didn’t survive to see it published and hold a copy in his own hands. Wink dedicated the book to him and she kindly gave us a signed copy today.

Jim has had a house in the Loire just 3O minutes away from us for over 30 years. Epeigné les Bois is a pretty French village with the church dominating the centre and charming houses dotted all around it. There’s a post office, a school, a restaurant, a rather pretty lake and a ‘source’.

Jim and Carole had been due to fly back to the UK at the end of March but of course France went into lock-down so they’ve been here ever since, hoping to return now at the beginning of July.

Jim and Wink both split their time between London and France. Wink in the mountains and Jim in the Loire. Both are experts of the wines of their region. A treat to talk with wine trade friends over a relaxed lunch.

We arrived just after midday. Wink was taking a quick turn around the lake. Jim opened a bottle of Chateau de Villeneuve’s Les Cormiers 1999 as an aperitif. Proof that Chenin has the capacity to age beautifully, the wine, gleaming amber in the glass was still bursting with beautiful aromas of quince and orange blossom, maybe even a hint of pineapple. Just wonderful.

A wonderful array of nibbles to accompany that was hard to resist – tortilla, cherry tomatoes, nuts and salamis.

For lunch, a delicious warm salad packed with chicken livers, goat’s cheese, soft lettuce and shaved fennel with a lovely mustardy dressing. Crusty bread (provided by me), Comté and Morbier cheeses to follow (brought by Wink) and then a dense but not heavy chocolate cake with thick cream made by Carole (an Elizabeth David recipe).

And alongside, we drank a superb, eclectic selection of wines from obscure grapes varieties. Totally unfamiliar with 2 of them it was a real treat to discover the rare Verdesse and Persan grape varieties.

Thanks to Wink’s book I can tell you that Verdesse is one of the traditional grape varieties of Isère, Savoie. Current DNA research indicates that it may be an offspring of Savagnin. It’s name refers to the dark green colour of its leaves. Plantings almost died out with the sharp decline of vineyards in Isère but recently a few growers have planted it amounting to around 5 hectares in total. Rich and round with a slightly spicy note, it was fabulous with the salad.

Persan is thought to have originated near St-Jean-de-Maurienne in an area called Princens, the derivation of the Persan name and a local synonym. It was widely planted pre-phylloxera but as vineyards died out in the Maurienne Valley, it also did too. It’s berries are oval and look almost like olives and it buds early making it susceptible to frost. There are probably around 20-25 hectares planted in total.

In the glass is has a rich deep plum colour which leads you to think it will be similarly concentrated on the palate. Not a bit of it. The weight is light and it’s full of bramble fruit and fresh acidity. I love it (and it also went perfectly with the chocolate cake).

Jim also brought out an old Pineau d’Aunis 2010 from Domaine Clos Roche Blanche. We love Pineau d’Aunis. This had the classic white peppery character and an evolved slightly stewed fruit note on the palate. Another grape variety that combines lovely character and light weight.

Clos de Mosny 2012 from Jacky Blot was also tasting delicious with evolved character and brilliant acidity (very characteristic of the 2012 vintage). Another win for Chenin.

Finally a little taste of a Chardonnay from the Côtes du Jura, La Poirière was not tasting fresh. It had been opened last night. It’s funny how wines can change overnight and reveal a different character that isn’t first apparent.

After lunch the sun came out so after having a coffee in the garden we all did a turn around the village. There were lots of people fishing around the lake, some sucessful, some less so. We paused to look in the potagers to see what was growing and popped down to see the Source de St Aignan, a natural water source in the heart of the village.

A pilgimage site in the past, hosts of people would descend the little staircase opposite the church that leads down to an underground tunnel revealing the natural water source. Said to cure cradlecap in babies, eczema, ringworm and dry skin (nice!) with its magical powers, the water isn’t drinkable.

Early evening was upon us before we knew it. Sunny and bright, we enjoyed a glass of rosé in the garden and I prepared a very light supper of roasted vegetables with a red pepper Mojo Rojo, seasoned Greek yoghurt and flaked toasted almonds.

I roasted one sweet potato, 2 carrots, a couple of leeks, 4 shallots and one courgette in the oven with a sprinkling of Sri Lankan curry powder (recent purchase) and olive oil.

The Mojo Rojo is a sauce made by blending one chopped red pepper with a massive bunch of fresh coriander, 3 cloves of garlic, 5 tablespoons of olive oil, a teaspoon of ground cumin and 2 tablespoons of white wine vinegar. It makes a delicious thick sauce that is tangy and fresh. Delicious with roasted vegetables or meat.

What an indulgent day. I think we’ll sleep well tonight.