Life in the Loire after lock-down. 26th May. Day 16 of déconfinement. 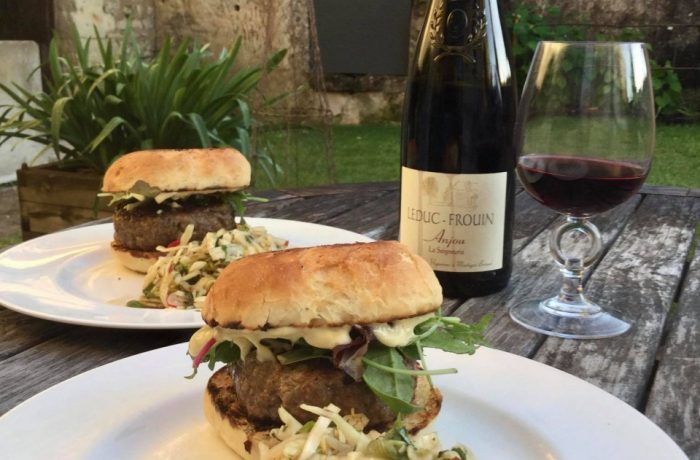 Those wretched squirrels are still at it in the attic. We spent a couple of hours lying awake last night alongside the cat, all three of us looking up towards the roof listening.

We were pretty sure we knew where they were coming in. Or at least that’s what we thought. Nigel put some newspaper in the hole and some sand by the entrance and for the past few days we’ve been up in the morning to check.

To no avail. Nothing has been disturbed. Maybe that’s not where they’ve been coming in. Maybe it isn’t squirrels at all. What now?

Louisa and I spent the morning trying to get a good picture of the two of us and doing a little video that we can use to publicise the Guided Tasting Case when we go live at the end of the week.

Not such a straighforward task as it seemed. To get a photo that we both liked, that’s good of both of us, with no double chins, roots or silly expressions proved quite a challenge. We had fun though, balancing Louisa’s mobile on a log pile in the middle of the forest just up by Chateau. About a hundred tries later we descended back into the house to choose the best one.

“No, you look too serious in that one” she says.

“But I have a double chin in that one” she replies.

“But I look really grumpy in that one” I reply.

And so it went on.

Eventually we decided upon one that we both like. It’s not the most flattering picture of either of us but we look like we’re having fun. And wine should be fun. It should be fun and accessible to everyone.

As for the video. We did several takes, introducing each other, explaining our project, talking recipes, ideas and wines. Louisa is on editing duty this afternoon so we’ll see if we manage to come across as coherent in that.

Just as I was leaving I saw a message from Rosie. Some happy news for the day. Her manager has validated her ‘periode d’essaie’ so that means she has passed her probation period and they intend to keep her on. Hooray. So pleased for her. It’s not been easy. She started the job in mid-February, did about 10 days in the office and then we went straight into lock-down.

Since then, she, and the entire team have been on ‘home-office’ and it looks like they will remain working from home for some considerable time to come. What a strange start to your working career.

Early evening I had a lovely walk in the vineyards with Yvonne. 6.5km in the still very warm sun. There was a lovely breeze up on the plateau which detracted from the heat as we strode it out among the vines.

Nigel was waiting for us in the garden when we returned enjoying a cold beer. His reason for starting without us was that he needed some beer to make a batter for the deep fried peppers he had planned for dinner. It seemed churlish not to join him so we had a glass of wine, first in the garden and then retiring to the house to get out of the sun.

I showed Yvonne the picture Louisa and I have chosen for our project.

“Oh no” she said. “It’s not very flattering of you, you look older than you are and your nose looks big (and it’s not!)”.

Dinner this evening was a simple homemade burger served in one of Louisa’s homemade burger buns with salad and lashings of garlic mayonnaise (which we had already indulged in with the deep fried peppers). Alongside I made an Asian style slaw (cabbage, bean sprouts, spring onions and radishes) dressed with fish sauce, rice vinegar, soy sauce, lime juice, sugar and chilli.

And a bottle of Antoine and Nathalie’s Leduc’s juicy Anjou Rouge was a fine match alongside. Lovely clean unoaked Cabernet Franc, full of crunchy red fruit and freshness.