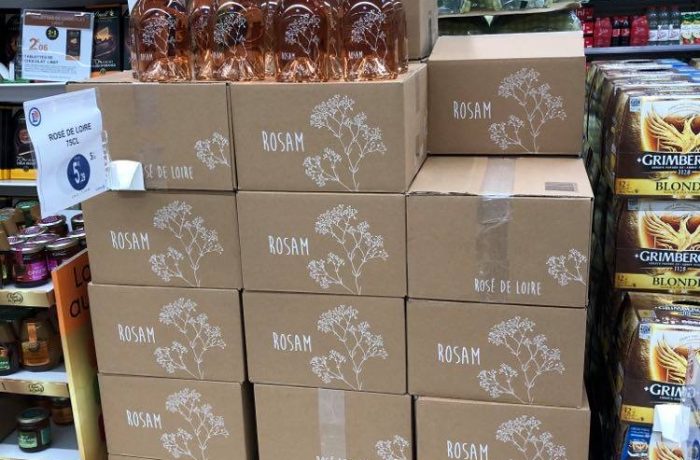 So, this weekend I was that woman in the supermarket that you try not to make eye contact with. The one trying to sell you something that you probably don’t want. Well, you might want it but you don’t want to engage in conversation with someone trying to persuade you that you do.

Don’t tell me you don’t do it. I know you do because I do too. Yes, I have to admit it, I’m often the one who stares resolutely ahead as if the person doesn’t exist. The one who takes her trolley down a different aisle to avoid contact. The one who quietly scoffs as she passes by thinking ‘as if I might be persuaded to buy something I don’t actually want’.

And now the boot is on the other foot. Here I am standing by a pallet of wine in Leclerc Tours Nord, trying to persuade people that what they need more than anything for the weekend, is a bottle of rosé.

Let me tell you. It’s HARD work. Engaging with people who have no desire to engage with you.

I arrive half an hour early. This is a first for me. I haven’t had the chance to try the wine so the first thing I do is locate where it is, buy a bottle and return to the car. Out comes the corkscrew, pop goes the cork and I pour a tasting sample into a glass that I’ve brought from home. Sniff, sniff, swirl, sip, slurp, swoosh, swallow (no spitoon on hand). It’s half past eight in the morning. I get some strange looks from people walking past. A women sitting in her car at half past eight in the morning drinking a glass of wine.

The wine in question is Lionel Gosseaume’s new rosé. Rosam, a rosé de Loire in a pretty engraved bottle.

‘It’s along the lines of a rosé from the south’ he tells me. ‘Pale and fruity but dry. Not too dry. Supple’ he says.

Supple? Hmm, we’ll see about that. Rosé de Loire has to be dry, very dry. If I’m honest with you I find it a bit austere sometimes.

But it’s not too dry. It IS supple (whatever that means). It’s light and fruity and dry – dry but supple. Smooth and easy to drink. How the hell did he do that with just 0,6g of residual sugar in the wine. That’s dry I can assure you.

Confident that I both know and like the product I’m trying to sell I venture back into the supermarket and get to work.

It’s a jours ferié (a bank holiday) here in France. My wine is positioned in the central aisle that everyone walks down when they come in with an empty trolley. I notice that another rosé wine half the price of mine is also on offer today and it’s positioned right as you come in alongside the bbq charcoal and marinated meats. Damn, that’s not helpful.

My competition is a Rosé d’Anjou however. A rosé with considerably more residual sugar. It appeals to a different market I tell myself.

My rosé is placed alongside discounted packs of Grimbergen and Heineken to my left and honey, herbal teas and Lindt chocolate to my right. Right let’s get to work.

It takes balls frankly. Approaching people that don’t want anything to do with you time and time again. You treat each person that walks past with renewed enthousiasm. Each one is a potential buyer. You try and judge who might be interested. Who’s your target market. Is it the young? Is it women? Is it men?

As the day goes on I develop a bit of a system. I have a look and see what’s in their trolley. If they have bbq charcoal then I’ll tell them they absolutely need a bottle of rosé to go with that. If they stop and look at the teas beside me I tell them I have something much more interesting than tea for them to drink. I ask people if they like rosé as they pass. I ask them if I can tempt them to try a new exciting rosé from the Loire. Yes, I know the producer well. He makes fabulous wine. Yes, he’s based in the Loire in Choussy about an hour from the shop. Yes, he also makes fabulous Sauvignon Blanc and Gamay.

Some people ignore me (well lots of people actually), some say they don’t like rosé, some say they don’t drink alcohol, some say they have enough in the cellar already (in which case I joke there’s always room for another bottle). Some say they are fasting. The ladies of a ‘certain age’ as we say here in France are generally the hardest to crack. They’re the ones that never respond, head in the air eyes straight ahead.

On the whole, the men are more chatty with one or two exceptions. Is that because I’m a woman? Is that because men make the buying decisions when it come to wine? I don’t know. What I do know is that you can’t judge a book by its cover that’s for sure. Sometimes the people you least expect to stop and have a word or take a bottle are the ones you’d never have down as rosé drinkers.

I’m in the swing of things by lunchtime. I’ve got my patter and things are going quite well. One or two people have taken a carton of 6 and others have slipped a bottle into their trolley to try. I’ve even managed to persuade a few people that initially said no thanks and then changed their mind. That feels good.

A two hour break over lunch (when noone in France goes shopping) allows me to sit in the car, have a salad, a small glass of rosé and then a cat nap before revving up again for the afternoon.

Back to work. Another 4 hours to go. It’s quieter this afternoon, my legs are starting to ache. It’s a long time since I stood on my feet all day.

And then, along comes a big, stocky guy with a huge beard and arms covered in tatoos. He’ll never buy a bottle I say to myself but, you never know. So, I have a go anyway. ‘Monsieur, est-ce que vous aimez le rosé? Est-ce que je peux vous tenter?’ And to my great surprise, he smiles broadly (he has his mask on but I can see it in his eyes).

‘Oui, oui, j’aime bien le rosé, mais mes filles l’adorent et elles viennent demain’ (Yes, I love rosé but my daughters adore it and they’re coming over tommorrow). With that, he asks me about the product, admires the pretty bottle and puts a carton of six in his trolley. Smiling he goes on his way.

There you go. It just goes to show eh? He made my day.

I sold 53 bottles by close of business. I don’t know if that’s good or bad but the chef de rayon told me they’d only sold 16 the day before so I think they were pleased.

Respect to all the animators/animatrices out there doing this job all year round. I’ve a few more days coming up this week selling rum for the oldest distillery in the Isle de la Reunion. Wish me luck!

Oh, and next time you’re in the supermarket and you’re approached by someone trying to sell you something, just return the ‘bonjour’, pass the time of day or stop for a word.

Spare a thought for the animatrice.