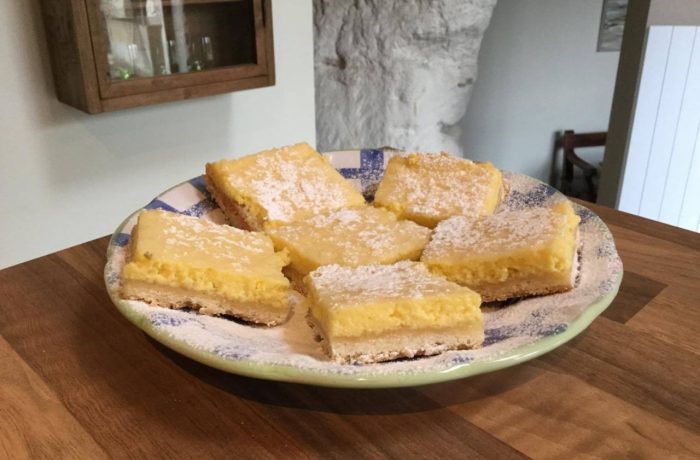 Perfect because yesterday he spent the afternoon raking, seeding and patching up the lawn. Lawn – hmm, maybe that’s a bit grand. We have a small area of grass in our garden that needed some love and attention. What we needed today was rain. We have rain so all is good with the world in Noizay this morning.

We listened to the Queen making her address to the nation last night. It’s 80 years since her first address when she was a young child during the second world war. Words of thanks and support for everybody working to keep us safe, words of solidarity for families and a reference to the famous war time song from Vera Lynn, we’ll meet again.

But I know we’ll meet again some sunny day

Rather poignant. I wonder how many of today’s young people feel connected to the Royal family. Prince Charles has been widely criticised for going up to Scotland after being diagnosed with the virus.

Today’s emotional moment for me came not from the Queen’s speech, but from Jocinda Arndern’s press conference when she said to the children of New Zealand both the Easter Bunny and the Tooth Fairy are considered to be essential workers. Don’t you just love her?

Now. I have a bit of a bone to pick with Martha. I made her lemon squares yesterday, left them in the fridge to set overnight, dusted them with icing sugar and we had a square each with coffee today.

Are they a snack or are they a dessert? Tasty? Yes. Combining all the things we love? Yes, what’s not to love (buttery shortbread and tangy lemon topping). But a snack? Hmm, not so sure about that. They seem more like dessert to me. Difficult to cut, tricky to eat in your fingers. These lemon bars require a fork and some creme fraiche.

Yes we will enjoy them but I have frozen half the tin for another time. For me they just don’t fit into the snack with a coffee category.

I think I’ve got a bit cocky with my bread making and may have my come- uppance shortly. Last night before bed I decided to have a go at combining the no knead and knead approaches. I used 50/50 plain and wholemeal flour, added yeast, salt, water and some olive oil. I kneaded the dough for 5 minutes in the Kitchenaid and then left it overnight to prove.

This morning I formed it into a loaf shape and let it prove for another hour while the oven heated. It looks great. Crusty and brown. I have a feeling it might be a bit heavy. In this respect we are a bit divided. I like a chewy wholemeal loaf whereas Nigel prefers a lighter white one. It’s my turn I think!

The poems keep coming in and I’m loving them. Like little treats that break up the day. I stop for five minutes and read another one, and then read it a second time.

Today sees the launch of a new App that will allow us to use our mobile phones when going out and about instead of having to print off a physical attestation every time. It seems pretty clear that only the tech savvy and young are going to use this. Reading through the instructions on how to download it my head is spinning.

This afternoon I sat. It’s a dreary day. Nigel lit the fire after lunch and I just sat in front of the fire. It’s the first time since the confinement began that I have willingly just done nothing for a while. Have you been feeling the same? The need to be doing ‘something’ even when there is nothing that really needs doing.

Nice to see a lovely write up of Tania and Vincent Carêmes Ancestrale Vouvray this afternoon on Chris Kissack’s blog (the Wine Doctor). Vouvray has some dynamic growers, many of whom have been mentored by Vincent. It’s good to see him (and them) get a mention.

For those of you that have caught the bread baking virus. Old home made bread makes ace breadcrumbs. No waste either. Just cut off the crusts, cut into small cubes and whizz in the blender. Put them in a bag and then pop it in the freezer. You just keep adding to the bag. Great for gratins, meatballs, thickening soups etc.

Dinner this evening was simple and another fridge raid. I fried one finely sliced onion in a little olive oil (I fib, I used the oil we used to make the Tuscan fries which is garlicky and herby), added a couple of chopped cloves of garlic and then 4 chopped apricots and one small preserved lemon (seeds removed and finely sliced).

I finely sliced the remaining chicken breast and popped that in the pot before adding 1 tablespoon of tomato purée and about a cup of chicken stock using stock powder. 5 minutes of gentle simmering and it was done.

A side of fresh wilted spinach and some mixed grains made for a pretty healthy dinner. It’s not the most beautiful dinner I have produced but hey, they can’t all be works of art can they?

Rather sobering news just before bed. Boris Johnson has been taken into intensive care and here in France, we had a shocking 833 deaths in the past 24 hours.