Life in the Loire nearly out of lockdown 3rd May 2021. 3 cats down and bees buzzing! 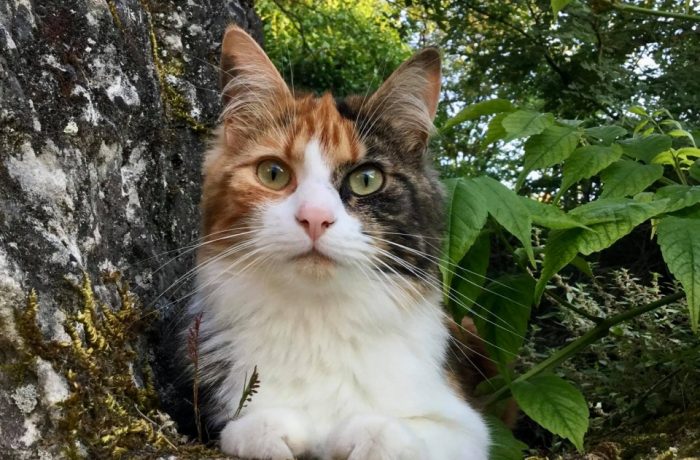 It’s been a year and a bit now since we started paying more attention to what was going on underneath our noses in the garden. As the world slowed down so did we. As the skies became calm, so the sound of nature turned up its volume.

Not that we didn’t pay attention before. We’ve always taken huge pleasure in watching the birds, observing the comings and going of the local cats (including our own, Pesto) and seeing the plants return to life after the cold months of winter.

This time last year you’ll remember we had a small mouse called Maurice that used to come into the atelier in the garden every night and eat a little pot of seeds that Nigel left out for him. We could even catch him in the act at dusk if we timed it right. Sadly he met an unfortunate end.

The resident doves Doris and Dave also had their lives interrupted a couple of months ago when a bird of pray swept in and took Dave to a rather abrupt end.

Good news for Doris. She’s found another partner. Desmond and she are inseparable and wait on the line for us to replenish the feeder every day. Barely apart, they practically knock on the window asking us to hurry up.

To the cats. Well what a year it’s been for them. Last summer we had Bigi, the little black cat owned by our nieghbours practically camping at our house. She had a litter of 5 kittens and was fascinated with our water fountain. Being a busy feeding mum she was constantly thirsty so it proved nearly impossible to keep her out of the house.

As time went on, the kittens went to new homes (apart from one that they kept) and Bigi decided that she still rather liked our house. Her step-brother Ernest (who we named Tigger) was also rather keen on the idea but we drew the line at that and just about managed to keep him out. Monza, the docile tom cat from two doors down continued to pop over just to say hi and then wander off again. He and Pesto are mates and often ‘hang out’ together. I’m sure they get up to no good.

Tigger had a narrow escape a couple of months ago falling down a well. We had to call the Gendarmes out and he scampered off as if nothing had happened. Just lost one of his nine lives and scared everyone else in the village in the process as we waited to see whose cat it was that was down the well.

Over the past few weeks we were beginning to wonder how on earth we’d keep all these cats out in the summer time when the doors are open all the time. A free house for cats to pop in, have a snack or a drink, catch up on a bit of sleep. We’d become Covid cat owners jumping at every whim and demand.

Pesto has definitely become a diva over the past year. She was vile to Bigi (the little black one) and spent most of her day chasing her around the garden and spitting at her. Not very ladylike at all. She resented us being nice to this interloper and pinned her down on the ground. Bop, bop, bop! You could hear the punches landing.

Until a week or so ago that is.

Sadly (for them), our neighbours have gone their separate ways. Bigi has gone – to a new home elsewhere. Tigger has gone too – to pastures new and the kitten (Bigi’s daughter) has gone with them.

Suddenly, we’ve gone from 5 cats to two. Pesto is completely at a loss what to do. Now she has noone to bully, noone to fight with, noone to chase. She just doesn’t understand what’s going on.

She sits on top of the well looking a bit lost. Hunting was never really her thing (she was bottle reared after her mum was killed by a car) and she and Bigi had a partnership where that was concerned. Pesto might find something – a mouse or a bird and then Bigi would move in and eat it after she’d got fed up with it. The difference between a more domesticated and a semi-wild cat.

Monza still comes over every day to say hi and off they go on their jaunts together. He’s a handsome tom that always smells of clean washing.

Meanwhile, the swallows have returned and are back making a few house improvements in the cave outside the wine cellar. We wonder if the resident birds who are here all year round resent these flashy second homers that just turn up for several months of the year.

In they come swooping and swirling with their daring acrobatics. Behaving like they own the place. Singing loudly and taking pride of place in the garden. Who do they think they are?

Just when you think all is calm, something else pops up. We’ve seen a huge black crow dropping down onto the grass from time to time in recent days. That’s a bit strange we thought and then no. Maybe not. Nigel bought some new bird food recently and to be honest, if you didn’t have your glasses on and saw it from a distance you’d swear it was muesli. Bursting with nuts and seeds, flakes of corn and yes, dried grubs and maggots.

Last but not least. Nigel spotted a swarm of bees this weekend at a friend’s house just down the road. They’ve not been able to get over here for a while so he’s been keeping an eye out. Incredible to see. Thousands of bees waiting for the ‘scouts’ to come up with a new place to live. We got in touch to let them know and a local family of beekeepers managed to save the swarm and give it a home. All’s well that ends well. Hurrah for the honey bees! (see the little video below)

And you think nothing goes on in the countryside!