Life in the Loire on lock-down. 29 April. Day forty six. 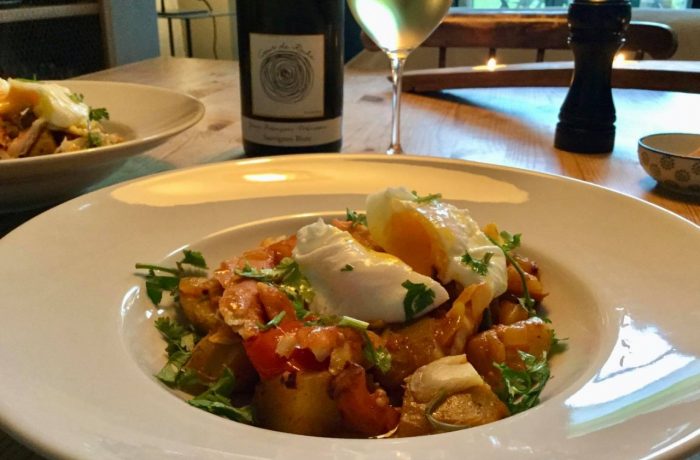 Sourdough toast and honey for breakfast today, then off to the shops to restock the fridge.

I’ve taken to wearing my mask now when I go shopping (thanks Juliette). The first time I felt a bit self-conscious and after a while my glasses steamed up. I realised when I got back that I hadn’t stretched it out so I can tuck it under my glasses (a bit dumb of me). Today it worked well and I felt much more comfortable.

Hats off to front-line workers or anyone that has to wear a mask all day long. Frankly it’s a bit claustrophobic.

Have you, like us, developed a fascination for other people’s homes during lockdown? It’s been riveting watching politicians, journalists and presenters participate from their own homes hasn’t it. A glimpse of how other people live, the photos on their desks, the pictures on the wall, what they wear. All these little things build up an image in your mind. Serious minded, intelligent, professional people are suddently interrupted by the children, cats jump on laps, doors slam, toilets flush and messages ping through on WhatsApp right in the middle of an important interview. Riveting stuff.

It reminds me of my first job in the wine trade in the early 1980’s. I worked for a big wine and spirits company and every year we had a Sales Conference. It was always held somewhere rather exotic and as well as being the moment for the Marketing Team to present the year’s plans to the Sales Team (at which time office attire was the norm so suits for the guys and suits for the girls), there were also lots of extra curricular events such as visits, dinners, team building activities etc.

The smart Marketing Manager who had a great sense of humour suddenly appeared wearing the most hideous acrylic zippy jumper with suede bits on the elbows and shoulders. The Sales Director came down to dinner sporting the most dreadful pair of baggy chords in a vile mustard colour. Shirts were unbuttoned rather too low exposing just a little too much chest hair. People that I’d rather fancied showed a new side of themselves I’d not seen until then. I realised I didn’t really know them at all, just the person in a suit.

We’re getting that now too – a peak into people’s private lives that’s not normally on show. People’s homes, their spare rooms, their taste, their, fragilities, their realities as we all grapple with technology in an attempt to carry on as normal.

And talking of pictures on walls. You may remember that Nigel has a ‘thing’ about pictures hanging straight. SO many wonky pictures in people’s homes. He just wants to go and straighten them all up. Maybe there’s a new career for him there. Professional picture straightener.

And another thing I noticed at lunch today (a simple affair – toast and paté with a tomato salad and a yoghurt). We have very different approaches to our yoghurts. I’m talking about those ones that have a layer of fruit compote or whatever on the bottom (you know the ones I mean?).

Me, I dip my spoon right down to the bottom and scoop up a little compote with each mouthful. The compote has to remain separate from the white yoghurt. Bright red fruit compote side by side with clean white creaminess and then in it goes. Him, he takes his teaspoon, sinks it straight to the bottom and stirs it all in. How can he do that? It’s just not right.

This afternoon I’ve been chatting with Louisa Plou of Chateau de Montdomaine (You remember I helped pick grapes for her ladies Chardonnay?). We’ve been thinking of things we can do in collaboration and have come up with an idea that we hope you’ll love. This will be for our lovely US peeps. We’ll ship a mixed case to your door and then I’ll send you lots of information about the wines. I’ll create a recipe to go with each one and give you heaps of information about how they’re made. Then, Louisa and I will do 2 on-line Zoom tastings where we’ll taste the wines together and you can ask any questions that may spring to mind. What do you think?

Dinner this evening was one of my favourite combinations. Smoked haddock on lightly curried potatoes and tomatoes and a poached egg. The recipe has few ingredients and only takes a short while to cook.

Earlier in the afternoon I cut 4 medium sized waxy potaotes into large cubes and cooked them in salted water (they need to be fully cooked but still firm). I drained them and put them on one side to cool and kept the pan for poaching the eggs later (save on washing up).

In the evening when I was ready, I poached the smoked haddock in a shallow pan with a little water. You don’t need very much haddock at all. It has a strong flavour and is quite salty and a little goes a long way. I used about 150g. When that was done I removed the fish and just put it on a plate to keep warm.

I put the pan that I used to cook the potatoes earlier back on the hob, filled with boiling water from the kettle, added a tablespoon of white wine vinegar and turned it down to a simmer.

I wiped out the shallow pan and put it back on the heat with a tablespoon of olive oil and a knob of butter. When it was foaming I added a teaspoon of brown mustard seeds. As they began to ‘pop’ I added one finely chopped onion, turned the heat down and cooked them gently for a couple of minutes until they started to soften. I then added a teaspoon of turmeric, stirred that around and popped the potatoes back in the pan.

Two chopped (unpeeled) tomatoes then went in along with a splash of water. If you don’t have fresh tomatoes, you can used tinned no problem.

While that was gently coming together I cracked 2 eggs into small bowls, gave the water simmering in the other pan a stir so it was swirling, and dropped in the eggs. Three minutes later I whipped them out and put them to drain on kitchen paper.

And to serve. A generous amount of the turmeric potatoes in the bottom of a large bowl. Some flaked smoked haddock and then the poached egg perched on top. Plenty of freshly chopped coriander sprinkled over. A table!

If you want it with more of a kick then you can add a little chilli powder or some chilli flakes along with the turmeric (I did).

Jean-Francois Merieau’s Coeur de Roche 2017 Touraine Sauvignon was a fabulous match for the dish. This Sauvignon is fermented in oak barrels and has a richness and complexity that integrates fully with the smoky flavour of haddock. Low yields and old vines contribute to the elegance of the wine which has lovely citrus notes and great length on the palate.

Sorry if I offended anyone that has an acrylic zippy jumper or mustard coloured chords.