Life in the Loire after lock-down. Weekly update 21st June. 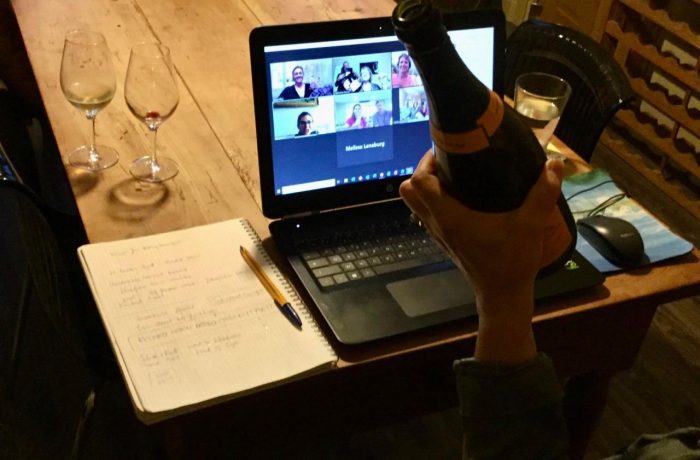 It’s been a wet, wild week punctuated with frequent heavy downpours, occasional hail and the odd moment of bright sunshine.

Organic growers have had to treat their vines at least twice in the past 10 days as we’ve had over 60mm of rain over the same time period. I say 60mm – actually it really depends where you are. Looking at the statistics from the Vouvray weather stations it varies hugely from place to place.

The Vouvray vineyards are on a plateau above the Loire, punctuated by a series of little valleys. The climate between one and another can vary hugely despite being very close together. The rainfall here in Noizay this past week has been far less than the rainfall in Rochecorbon, another of the Vouvray villages a little further west.

One or two growers have seen vines damaged by localised hail which is hard to bear. It’s the one thing that can put a spanner in the works during the summer months. Excess heat can be hard to endure but hail can write off a crop in 5 minutes. On this occasion the damage was minimal thank goodness. In 2013 there was a terrible hailstorm in the Vouvray vineyards that wrote off the year for the growers that were affected.

Most of this week I’ve been grappling with technology preparing for the Zoom tastings with Louisa. I’m a Zoom newbie and apart from our dinner party experience with our friends Ali and Jos a couple of weeks ago, I’ve never had to organise a Zoom meeting (or attend one).

Ali gave me lots of advice and spent some time showing me the main features and on Wednesday night this week we did a trail session with a few willing volunteers. A couple of hours later Louisa and I felt ready for the real thing.

And so last night we connected with a group of loyal clients (many of whom have become friends over the years) in New York, Texas, Florida, Tennessee and Massachusetts (always have to look up the spelling on that one) for an hour or so of wine education, tasting and chat on International Chenin Day. How appropriate was that?

It was quite an emotional moment raising our glasses and sharing the same wine together. The fruition of a project that has engaged both Louisa and me for the past couple of months, one that has been a lifeline for me and has brought much pleasure during an otherwise rather dark time, (just stopping for a moment to blow my nose).

In other news, we continue to be the local cat santuary with Pesto’s friends Bigi and Monza making a regular appearance to pinch food and have a drink. They seem to have a mutual understanding. Monza is the boss, Pesto the floosie and Bigi the underdog.

Have any of you seen the film Nikita? Well Monza is Bob, the one that gives the assasination instructions, Pesto is Nikita who goes in for the kill and then Bigi is Leon, ‘the cleaner’ who comes in after the deed has been done and clears away the evidence (ie eats the kill). It’s a system that seems to work for them despite being a little unsavoury for us.

The Mummy swallow is still sitting on her eggs with no sign of chicks as yet. I’m hoping they won’t come off the nest until they can swoop over our heads like their parents do or we may have more casualties in the garden to come. Pesto and Bigi remain on sentry duty waiting for the nod from Monza.

The lupins have decided to make an appearance at last despite hating it in the alkaline border that we forced them into. Spikes of yellow flowers poking their heads among the self seeded geraniums (I think that’s what they are).

The snails have been munching the leaves like there’s no tomorrow. When the weather perks up (which it’s due to do tomorrow) we’re going to see a riot of agapanthus. Dozens of flowers have popped up in the past couple of days and a little sunshine will push them on.

It’ll be nice to be able to while away our lunches and dinners in the garden again.

Nigel ventured out to the cheese stall in Les Halles (Tours) on Thursday. We’ve not had cheese for a while (rhubarb from the potager has replaced it for the past week) so we were beginning to get withdrawal symptoms.

What a winning selection he chose. A milky, lemony goat’s cheese called Meringue (it looks like one), a Reblochon that frankly is bang on, rich and creamy and floral and smells like cows (instant comfort for Nigel ex farmer), another little chunk of the Marechal (that we discovered recently and are addicted to) and finally a crazy cheese from Wisconsin.

Yes, can you believe it, a cheese from Wisconsin in the US on sale in a cheese mongers in the Loire valley? Neither could he. He was intrigued. he asked the lady behind the counter what it was like. She said it was fabulous.

It was! Bellavittano is its name and it’s made by master cheesemakers in Plymouth, Wisconsin. Rich and creamy it’s sort of half way between an aged Cheddar but also has a texture and sweetness that is similar to Parmesan.

Completely unaware of how or where is was made when we tried it that was our reaction.

And it was coffee. The cheese is rolled in espresso coffee grounds. It’s really delicious. It’s crazy but it works. Whoever would ever have thought of that? High five to the cheese monger here for buying that one. Who would have thought the French could be so open minded lol.

Dinners this week have been fairly light and seasonal. We had a wonderfully fat buratta with tons of basil from the garden that I blitzed for lunch one day (the basil has not liked all this rain) and one of our favourite recipes, smoked chicken with roasted summer vegetables and a curried coconut milk dressing.

Wines on the table this week have included the newly bottled bursting with fruit 2019 Gamay from our friends at La Table Rouge (teeny micro vigneron, Vin de France, zero pesticides, chemicals or intervention) and the lovely spicy Vaumoreau Bourgueil 2009 from Pierres Jacques Druet (quite a long way from natural, retired winemaker that was hugely politically incorrect but still one of the most fun ever).

I also made a rather delicious crispy lemon and thyme chicken thigh recipe with a smashed white bean purée, lardons and lemon (even if I say so myself). That recipe I shared with my trusty subscribers. We served with the wonderful Boa Moa from Jean François Merieau in Touraine alongside (love that wine).