Wine education. So what’s the cost of frost? Lighting candles in the vines. 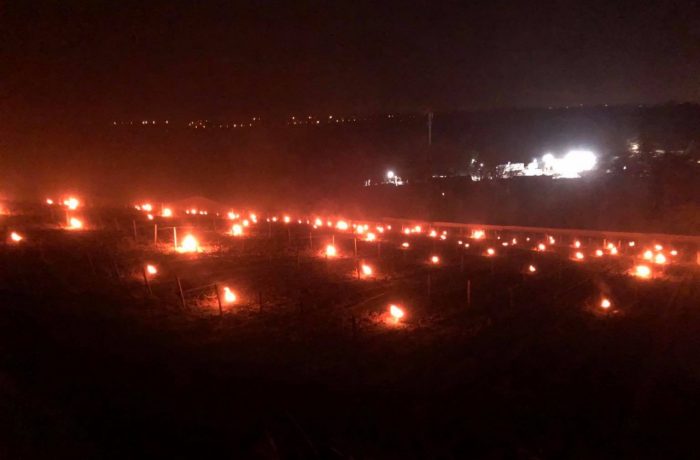 This past week has been a tough one for growers in the Loire as they battle to save their 2021 crop.

March saw some of the warmest temperatures in 75 years nudging vines all over France out of their winter slumber. All very well if the weather remains relatively warm and stable.

But no, climate change has seen to that. With increasing frequency, temperatures have been plummeting during April and May, leaving growers distraught as tender buds are devasted by the cold.

One of the tools used in the battle against frost is lighting ‘candles’ (or bougies as we call them in France) between the rows of vines.

How does that work and what does it cost?

Protection using candles is the second most effective way of protecting vines from frost.

Aspersion (the use of water that creates heat at the point of freezing) is the most effective but can only be used if there is a reliable water source nearby.

The candles are lit when the temperature dips below zero (generally the coldest time is between 4am and 8am) and remain burning until the temperature rises towards zero. The colder the temperature is predicted to be, the more candles required (as you can see from the lid of the candle in the photo above).

It’ll cost a grower around 2,500 euros to protect one hectare of vines for 3 nights if the candles burn for an average of 3 hours a night.

Each candle has to be placed individually in the rows, each one has to be lit separately.

We worked with Vincent Carême’s team this week to light candles and it took us an hour to light them (we were a dozen) in an area of around 3 hectares.

As it’s so labour intensive, this system is only suited to small parcels of vines. Growers generally choose to put candles in their premium vineyards or those that are especially at risk of frost (at the bottom of slopes, in natural hollows).

Candles are effective against all types of frost, both radiative and convective but the costs are very high when there are repeated episodes of frost such as we have this year.

So, let’s say that you have an estate of 20 hectares and you decide to protect 3 of them using candles. That will cost you 7,500 euros for 3 nights.

We’ve already had 3 nights of frost this week and more is forecast for next week.

In simple terms, using bougies like this will add around 0,49 € per litre to the cost of the wine based on an average yield of 50hl/ha.

It’ll cost more using the wax candles (rather than the more commonly used parrafin ones) as the burn time is less (8 hours rather than 10-12).

Organic growers rarely bring in yields of 50hl/ha and in 2020 yields were particularly low after a dry, sunny season.

So prices will rise to take that into account? Well that’s not quite so straightforward. The Loire is a very price sensitive region and price hikes are not accepted easily. Generally it’s the growers who loose out.

A double blow. Fewer grapes to pick and the high costs of saving what’s left.