Life in the Loire after lock-down. 4th June. Day 25 of déconfinement. 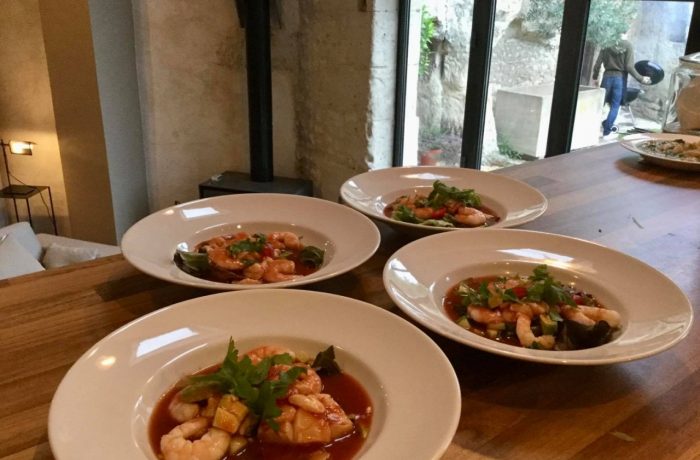 Lightening flashes illuminated the sky throughout the night. We lay in bed waiting for the storm to come but it never did.

This morning the skies are heavy and grey. Our plans for a barbeque this evening have been skuppered I think.

A lady in Amboise celebrated her 106th birthday this week. She was the first woman in Indre et Loire (our department of France) to get her driving licence and was still driving from Amboise to Le Croisic (on the west coast – a long way away), until she was 97. Now in a retirement home, she had a shampoo and set, put on a little make up and refused to wear her glasses (as she thinks they make her look old) on her birthday.

Family and friends gathered around her to celebrate with a cake, Champagne and flowers at which point she said “I don’t like Champagne, I much prefer Vouvray – and not in plastic glasses!’.

Known for her ‘franc-parler’ (directness). I think we’d get on. What a character, and what times she’s experienced. Born in 1914, lived through 2 world wars and now Coronavirus. She’s totally right about drinking from plastic cups by the way. Completely ruins wine.

Popped round to Louisa’s to sign another couple of cards for our Guided Tasting Cases. Fred said there were very few people in the restaurant last night. I don’t think it’s helping that the weather has broken.

Sod’s law isn’t it. While we were in lock-down the weather was amazing but we couldn’t go out and now things have been eased and we can go out, the weather has taken a turn for the worse.

After a simple lunch (the great British sandwich) I removed the plates from the table and went to load the dishwasher. I caught Nigel hovering behind me as I put them into place.

“Yes it will”, I replied, “I always put the plates there”.

“It won’t” he said “the thingymejig catches on the top of the plates and it doesn’t wash properly”.

And so I bend down and twirl the thingymejig and what happens? It damn well catches on the plates and doesn’t go round properly.

The look on his face is one of pure pleasure. We both laugh as I admit defeat and move the plates to another area of the dishwasher. I really think it made his day!

What is it with dishwashers? Everyone has their own way of stacking don’t they? I know I do. And when other people stack in a different way you find yourself moving things around when you next go to put something in. You put things where ‘they should be’. Noone says anything, everyone does it.

Busy this afternoon prepping for dinner tonight. Nigel is making marinated pork and chicken skewers. The pork has the zest and juice of an orange, honey, balsamic vinegar, light soy sauce, olive oil and grated ginger and the chicken has lime juice, coriander, chilli, honey and olive oil. They’ll sit until this evening in their marinades and despite the weather turning, we’ll still barbeque them, just eat inside.

My task is to make a couple of salads. An Aisan slaw and roasted aubergines with curried yoghurt. The last time I made an Aisan slaw I found it went rather wet soon after dressing so decided to use a technique recommended by John Whaite.

After finely shredding the cabbage, carrot and red onion, you put it all in a bowl and add 2 tablespoons of sea salt and 75g of caster sugar. You mix it all together and then leave it for an hour or so. Then, you tip it into a colander and drain it under cold water, squeezing off the water and putting it back into a bowl.

It tastes good already, some of the salt and sugar is absorbed into the vegetables and it stops any wetness when you add the dressing. That went back into the fridge and then I added the Aisan dressing later on in the day. A mixture of light soy sauce, fish sauce, brown sugar, lime juice, chopped fresh chilli, grated garlic and a little oil. Final job is to add lots of chopped fresh coriander and mint.

The roasted aubergine was an Ottolenghi recipe from his book Simple. You roast thick aubergine slices with oil and seasoning in the oven until rich and dark remove them from oven and put to one side. Greek yoghurt is mixed with curry powder, turmeric and a litte salt. Then you gently fry a finely sliced onion with one teaspoon of curry powder until golden and add some sliced almonds, frying for a couple of minutes until the nuts are lightly golden.

Everything apart from the yoghurt is served at room temperature. First the aubergine slices on a plate, then the chilled curried yoghurt goes over the top, then the onion and almond mixture and finally, just before serving, some curry leaves fried until crisp crumbled over the top.

There should have been a sprinkling of pomegranate seeds on the top but I couldn’t find one. Colour wise that would have lifted the dish but it was very delicious without them. It would make a good vegetarian lunch on its own served with some crusty bread.

Just time to pop out to the pharmacy to stock up on Ibuprofen. I’ve had a bad back the past couple of days so we are a right pair at the moment gingerly going about our business. We resemble a couple of old age pensioners.

Just as I arrived back, John and Sheila drew into the drive. Armed with various bags and bottles and all the ingredients for our starter and dessert we enjoyed a good old fashioned cup of tea before moving onto anything alcoholic.

We all love to cook and there’s always lots of talk about who has made what using what ingredients and where we found them. We miss the oriental shop in Angers that we used to visit to buy all our Aisan ingredients. We’ve found one here in Tours but there are certain things that it doesn’t stock.

Tea done, we moved onto cocktails. A Bombardier to start with. Like a Negroni but using Bourbon as the base, it’s delicious.

Sheila then went up into the kitchen to prep the starter. Out came a flask, various tupperware containers and bags. What was on the menu? Halfway between a Bloody Mary and a prawn cocktail (things are looking good). A tomato juice base with Tequila, Tabasco and Worcester sauce, the juice of a lime and some orange and in to that, some sliced uncooked scallops that cook in the acid of the mixture. I’m going to like this.

Also in the bowl, some diced avocado, lettuce from the garden, cubes of cucumber, quartered cherry tomatoes and some big juicy prawns. A sprinkle of fresh coriander to dress and à table.

This was a big hit. We all agreed. Prawn cocktail is the right word for it. So refreshing and tangy. Perfect summer fayre. I would love this on a sunny day sat in the garden and it was just the right start to the evening. Nigel served a light Sauvignon Blanc from Chateau de Nitray alongside (although you might see from the photo that John and Nigel are just ‘checking’ that the red for the main course is ok).

Our pork and chicken skewers followed. Light and fresh with distinctly different flavours, they went well with the two salads. A couple of different Malbecs to compare and contrast for this course. One Guele de Boa from Jean-Francois Merieau and the other from Fred Plou, the Cuvée l’Artiste. Both rich and spicy, full of flavour with quite bold flavours and tannins, there really are some great wines coming from around Amboise these days. Who says the Loire valley can’t do robust red?

A little cheese to follow. A locals goat’s cheese in the shape of a heart from the Berry region and a soft creamy Dolcelatte from Italy.

And to finish, John brought pears poached in butter and Marsala, served with a vanilla infused Greek yoghurt. Just slightly warm from the oven they were the perfect end to the meal.

As always when we get together, both the wine and the conversation flowed. We talked about silly things and serious things, things close to our hearts and things that make us cry. We’re never short of topics to discuss and we always ‘pick up where we left off’ even if we haven’t seen each other for ages.

Just a small short to finish off the evening with a petit noir (probably shouldn’t have had either really but well, you know).

Sheila and John are huge cat lovers and Pesto was rather unsociable this evening. She’s understandably rather preoccupied at the moment being on permanent baby bird patrol but you know what it’s like, you say how sociable they are and then they let you down.

As we went up to bed Pesto followed us up the stairs as she always does. Tonight she decided she was going to sleep in the spare room with them. And she did, curled up at the bottom of the bed, knowing she was welcome.