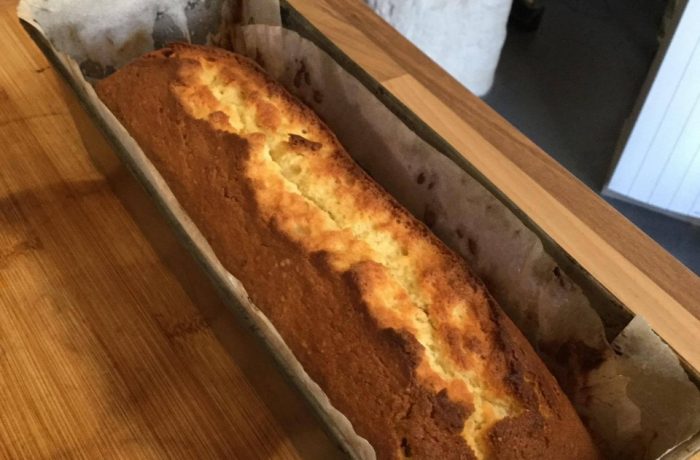 I’d like to report that we are both feeling revived, refreshed and raring to go this morning having had a night off the wine.

Disappointingly that isn’t the case. We laughed this morning as we looked at each other across our cup of tea. We both suffer from hayfever and the pollen count is very high at the moment. Puffy eyed and worn out is a more accurate description.

The fridge is looking a bit forlorn today. I’m trying really hard not to keep popping out to the shops and have been doing pretty well. It does require some serious creativity as things get really low.

There’s just enough milk for Nigel’s cup of tea this afternoon. When I talk about milk I mean fresh milk not UHT milk. That’s one of those things about the French that we just don’t understand. They drink long life UHT milk not fresh milk. Why? You’d think they would wouldn’t you? After all, the French are so particular about what they eat but not with milk. I wonder when that happened?

In a massive hypermarket that covers acres of land you could count the number of bottles of fresh milk on sale in a jiffy. The French head to the longlife section that stretches the entire length of the shop and then stock up on litres and litres of long life UHT milk. I could understand it if it tasted as good. It does not. It doesn’t taste the same. And, what’s more, the shelf life on fresh milk is long anyway, way longer than milk in the UK.

Rant over. All the better for us as there is never any shortage of fresh milk at the moment. Flour yes, eggs sometimes, but fresh milk no.

Talking of which, there are no snacks in the house at the moment. I fib, there is one oat and raisin cookie left and that’s it. No biscuits, no cake, no crisps, no nuts. Nigel needs snacks. I mostly certainly do not.

Nigel is one of those people that gets the shakes when he doesn’t eat and really needs a snack mid morning and mid afternoon. I’m one of those people who would love to eat a snack mid morning and mid afternoon but have absolutely no need for it whatsoever. This requires extreme willpower on my part which is wavering a bit during the lock-down it has to be said.

So, in the oven is a lemon and lime drizzle cake. It’s nearly done and I can smell the aroma drifting through from the kitchen. Aaargh. It’s so unfair!

I creamed 125g of unsalted butter with 175g caster sugar, then added 2 eggs (one at a time) plus the rind of a lemon and a lime. I then carefully mixed in 150g self-raising flour and 25g ground almonds (I always try to add a few ground almonds to cakes, it makes them moist) and 4 tablespoons of Greek yoghurt (it should have been milk but the milk is saved for tea which is infinitely more important for an English person). That went into a lined loaf tin and then into a preheated oven for 45 minutes (180°C).

While the cake was cooking I made a syrup using the juice of one lemon and half a lime with 100g of icing sugar. I gently heated it to dissolve the sugar and then poured it over the top of the cake (after piercing it all over with a skewer) when it came out of the oven.

Lunch in the garden today. A fluffy omelette with some grated Beaufort cheese in the centre, a small side salad, a black coffee along with a slice of cake fresh from the oven. Yes, I gave in. Just a small slice for me, 2 for Nigel. 4 fighter jets flew past high up in the sky. The first planes we’ve seen in the sky for weeks. It’s been so clear and blue these past few days. Nothing to catch the eye up there, no winding vapour trails that have you imagining where they are travelling to and who might be on board.

This afternoon we caught up with our friend Joyce in New York. It was great to see her face and swap stories of life during lock-down. We can only imagine how bizarre it must be to look down 2nd Avenue and see practically nothing. No cars, no taxis, few people. A practically empty street in a city that never sleeps. Until now that is. Joyce takes her daily exercise in Central Park, a far cry from our vineyard walks. She’s a real Francophile so I know we’ll see her back in France as soon as we return to some sense of normality. Whenever that is.

Dinner tonight was roasted butternut squash and onions with spicy chickpeas. A recipe from Hugh Fearnley-Whittingstall’s River Cottage Veg, suggested by our friend Sheila. It was really tasty. Would definitely cook it again.

No wine on the table tonight. We curled up in front of the fire and watched Stephen King’s 1922 on Netflix. Sure to have nightmares tonight.