Life in the Loire after lock-down. Weekly update. 4th October 2020. 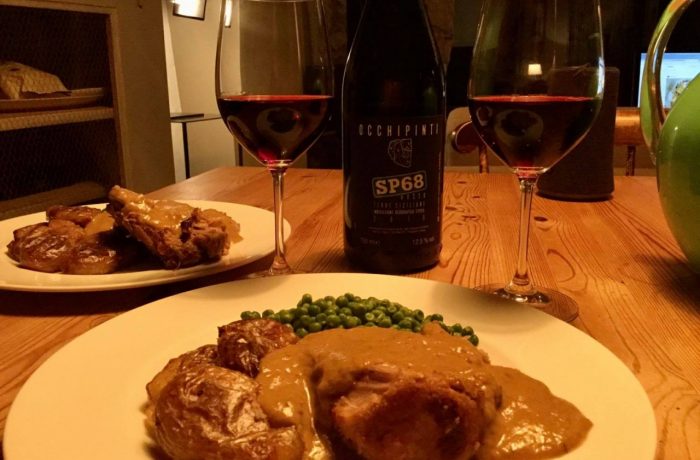 Sad news from Noizay this week.

Those of you who read my daily blog during the lockdown will remember we had a litte mouse that we called Maurice, who used to come and eat a small pot of seeds every night.

He lived behind the workbench in the ‘atelier’ in the garden and left a trail of husks behind him. Every night Nigel would replenish the pot with seeds and every morning they were gone.

Well, it seems that Maurice has met his end. It’s been a week now and there has been no sign of him. Every day since March he’s been coming and now – no more.

It’s strange how such a little thing like that has given us so much pleasure over the past few months. We joked about him eventually not being able to squeeze through the hole and from time to time we spotted him out on the workbench at dusk, quietly munching away.

In other news, the last of the black grapes have been brought in this week. Quality looks good but the weather has been pretty awful and down in the south of France, a year’s rain in one day has seen entire villages being swept away. As I write there are still people missing, unaccounted for as the search for survivors continues. 2020 is proving to be a difficult year on all fronts it seems.

As we seem to have moved from summer to autumn, this week we gave in and lit the wood burning stove. Every evening we’ve sat in the salon, glass in hand deciding if we need to light the fire or not.

Some nights we’ve held out longer than others giving in to the inevitable chill that comes with sitting around and other nights we’ve been stripping off layers after deciding we need one and then regretting it.

There are jackets, jumpers, t-shirts and scarves strewn all around. A sure sign that we have not quite decided what season we’re in quite yet.

On the food front, we’ve definitely moved into earthy autumn flavours and have enjoyed some lovely dinners this week.

On Monday Nigel cooked a delicious artichoke and soft lemon salad with a garlic thyme and lemon dressing. Served alongside a roasted corn-fed chicken leg it was delicious and a timely reminder of the complications of finding the perfect wine to match artichokes.

Pad Thai was the order of the day on Tuesday. Rice noodles cooked with prawns, fish sauce, brown sugar, eggs, peanuts, beansprouts and and chives from the garden.

On Wednesday we decided to pop down into the village and get a takeaway pizza. There’s a van that comes every week and opposite, there’s a mobile wine bar/caviste where you can buy a glass of wine while your pizza is being cooked. Such a brilliant idea.

Le Van is run by a young couple who know their stuff and serve up a really interesting eclectic choice of wines that varies from week to week. We have a glass and then buy a bottle to take away.

It’s wine fair time in the big supermarkets here in France at the moment. As a rule we buy little from ‘les grandes surfaces’ as we have a cellar full of great wine ourselves but this year, with our own stocks being low, we’ve bought a few bottles and have been nicely surprised at the quality and price of the wines we’ve tasted.

Altitude 430 is a good example of a wine that really hit the spot with us. A Gamay from the Côte Roannaise, there’s some connection along the line with the Sérol family (the best known producer in the appellation) but clearly this is a wine produced with a special label for the supermarket side of the business. It’s delicious and at just 6 euros a bottle, we popped back and bought another 4 bottles to enjoy over the winter months.

A Mondeuse from Savoie accompanied our pasta on Thursday night. Roasted butternut squash with slow cooked onions, thyme, smoked bacon, cream, wine and Parmesan. Both were delicious. The creamy smoky comforting pasta and the forest fruit and spice packed Mondeuse.

Friday was miserable so I turned to the humble sausage for comfort. A sort of casserole with layers of soft onions and ground fennel cooked with sweet vermouth, crispy brown sausages, tomatoes and Parmesan breadcrumbs. Mathieu Vallée’s Chateau Yvonne 2016 was a rather upmarket wine choice but it was tasting just fantastic and was a fabulous match. All smoky dark fruit and ripe rich tannins.

Over the weekend we trecked over the to the Atlantic Coast for a very ‘natural’ style Muscadet de Sevre et Maine from Domaine Complemen’terre. Marion Pescheux and Manuel Landron’s Melon de Bourgogne from a half a hectare plot, Le Breil was a lovely change. Slightly cloudy (due to not being fined or filtered) it had ripe fruit and herbs with a hint of stewed apple, a touch of spritz and nice minerality.

In the mood for some fish I made a sort of bouillabaisse (but not at all really) on Saturday night. I sweated onions, fennel, thyme and orange peel with fish stock for half a hour before draining and then poached salmon, lieu noir and raw prawns in the stock for five minutes before thickening it with aoili (not really either – bought mayonnaise with finely chopped garlic added). Some croutons spread with harissa to garnish finished the dish which was tasty and really hit the spot.

Something more rounded would have been better. An Albarino from Galicia for example or a smooth Viogner from the Rhone or maybe a Marsanne Rousanne blend.

The highlight of the week for me was last night’s dinner. Nigel was en cuisine and prepared one of our favourite long slow cook dishes that we’ve not had for a while. Shoulder of pork cooked with whole milk, lemon rind, bay, garlic, carrot and leek. Two hours of really gently simmering leaves the pork so tender you can pull it apart with a fork and the sauce (which is blitzed) is rich and creamy and full of flavour. Add to that some squished new potato roasties cooked in goose fat and a few peas and I’m in heaven.

And the wine pairing was heavenly too. SP68 from Occhipinti is just so delicious and really appeals to our cool climate palates. A blend of 70% Frappato and 30% Nero d’Avola, it’s fresh and spicy with cherry, plum fruit and delightful freshness. Juicy and mouthwatering. Love this wine.

And so that concludes our week. As you can see there’s been a lot of eating and drinking and not much else going on. I’m thankful for our love of food and wine and our passion for cooking. It give us endless pleasure and occupation during this strange unpredictable time.

Until next week, cheers from Noizay!