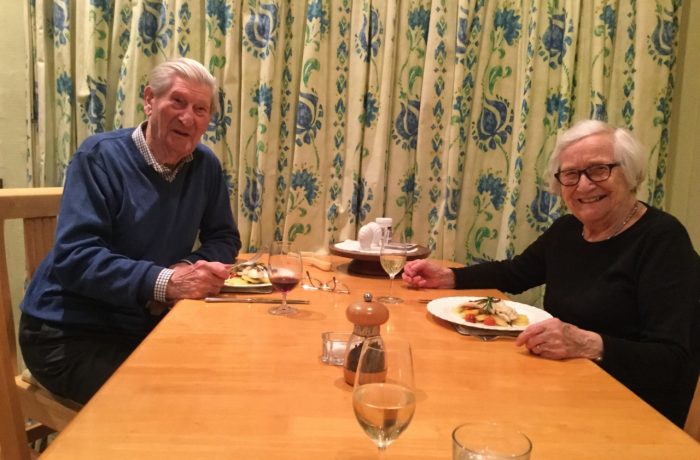 I slept quite well. Having turned off the radiator and opened the window so I could breathe, I woke up around 07h15 French time (06h15 in England).

Downstairs to make a cuppa (the first of three), pick the Times up off the doormat, back to bed for another hour or so.

My parents don’t rush around in the morning these days and when I heard stirring I popped upstairs with a cup of tea for Mum.

Next thing I see is Mum in her dressing gown with a stick in one hand, her empty tea cup in one pocket and the saucer in the other. I tell her I’ll take it downstairs and eventually she acquiesces. Ten minutes later I notice that she’s left her cup and saucer for me to take downstairs but taken my mug down instead.

I decided before I came over that my job during the week would be to cook. It’ll give them a break and I can batch cook some things they can pop in the freezer for another day.

And so, another cup of tea in hand I sit down and plan the menus for the week. Thankfully, my cousin Penny is going to do the shopping for us. I start to feel a bit guilty as the list gets longer and longer.

There’s just enough in the fridge to rustle up a tasty lunch of homemade carrot and bacon soup and a little cheese before the supplies arrive. Small glass of wine before lunch seems to be the order of the day. Not complaining.

Penny arrives with the shopping (that gets left for a couple of hours and then I unpack). A sneaky bottle of Tio Pepe Sherry made it’s way in there. How did that happen? Well, got to make the most of it. Can’t buy Sherry in France!

During the morning I went down to the wine cellar with Dad. Once upon a time it held around 2000 bottles. Mostly Claret (we always called Dad a Bordeaux bore). Today, about 20 bottles remain on the racks. A few old Burgundies, several bottles of Champagne, a selection of excellent dessert wines. I think he feels sad when he looks around and sees what it is now and what it was then.

We discuss selling a case of vintage port that’s the only unopened wooden case in the cellar. Should we drink it, sell it, keep it, give it away? I vote for drinking it!

These days he has a regular delivery from Majestic. They do a great job. He calls, they have a chat about what he fancies and he leaves it up to them to put together a mixed case or two. It works well. He admits his palate isn’t as refined as it was and is happier drinking fruitier, lower tannin style wines than he would have done when he was younger.

He drinks his reds warmer than I like – and his whites! I slip a couple of bottles in the fridge (and the bottle of Tio Pepe has gone in too).

And so this evening I cooked one of Nigel and my favourite recipes that we have served time and time again to our clients over the years. Adapted slightly by us it originally came from the River Café.

Sliced waxy potatoes (although there was an abundance of Maris Piper already so I used those) par boiled and then roasted briefly in a hot oven with lots of fresh rosemary. Flip them over, add a punnet of cherry tomatoes and return to the oven for another 1O minutes or so. Out again and on goes a piece of cod per person. Normally we use dos de cabillaud (the really thick bit in the middle that is chunky) but last night some flatter fillets were the order of the day.

A splash of white wine, an extra drizzle of oil, a sprinkle of Malvern salt and an anchovy or two per fillet and back in the oven for 10 minutes.

Et voila! Very few ingredients, nearly no washing up and it has bags of flavour. Would it pass the parent test?

Dad said “it made something of cod!”. I’ll take that as a yes then. What did cod do wrong in the past?

A little Camembert to finish before watching a documentary about Henry VIII and his rise to power at full volume and then bed.