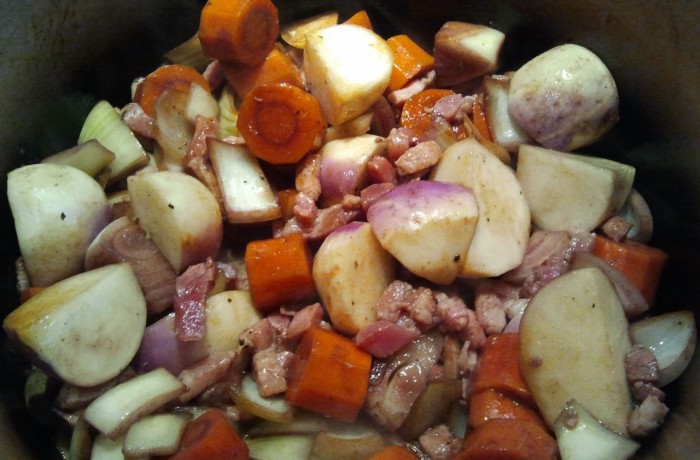 Today I’m making a beef casserole.  I don’t go quite so far as to call it  a Boeuf Bourguignon as I haven’t followed a recipe.  But, there’s plenty of wine involved (a whole bottle).

Last night I cut up a large piece of Paleron into big chunks and put them into a bowl together with a large roughly chopped onion, 2 or 3 big cloves of peeled garlic, a couple of big sandy carrots cut into fat discs and a couple of big sprigs of fresh thyme from the garden.  I then poured a whole bottle of red wine over the top, added a little seasoning and put it in the fridge to marinate overnight. 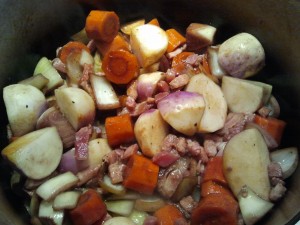 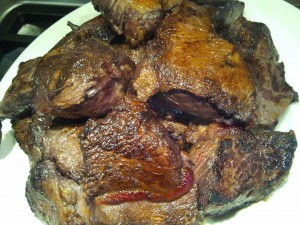 Paleron for a beef casserole

This morning I drained the beef, dried it, seasoned it and then sealed it in a hot pan.  The veggies were drained also and sautéed for a few minutes before adding some lardons and 4 navets cut into big chunks.  I added a tablespoon of flour and cooked it out for a few minutes before adding back the beef and then pouring the marinade back into the pan adding a little water to keep everything covered.  After bringing it to the boil, I’ve put it in a very low oven (150°) where it will stay for 2 to 3 hours or until the beef is meltingly tender.

If I’d been a bit more organised I would have done this yesterday as long slow cooked dishes are often better having had a day to ‘rest’.

What is also satisfying (apart from the lovely aromas that will waft around the house all day) is the fact that I have used the carrots, onions and navets grown by our neighbours.  They have a little Potager business that sells from the farm gate several times a week and we have a box delivered from them once a week on a Friday.  Some of our more environmentally conscious neighbours in the hamlet will complain that they are not ‘organic’ and I know that’s true but the notion organic is not always quite so straightforward as it seems on the face of it. To me, having a box of vegetables delivered on a Friday evening that were probably in the ground about 2 hours before, and having them in a casserole that will be eaten the following day is pretty good. Rather support our neighbours than hop in the car and drive miles to an outlet that sells organic produce, much of which has been transported miles and will be less fresh.

What do you think?