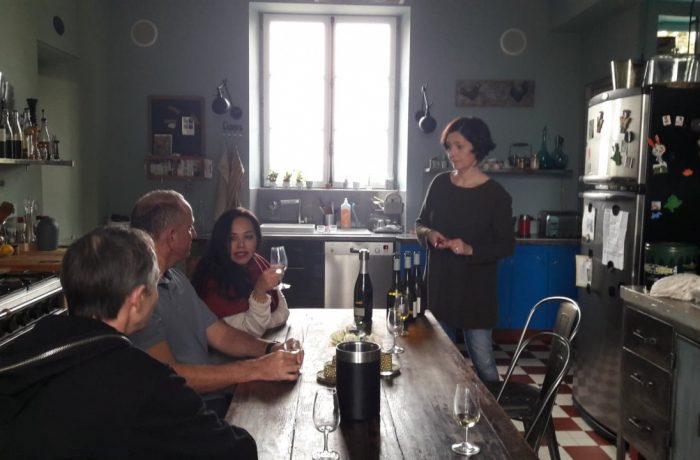 Peter and Julette Hahn’s tiny estate in the heart of the Vouvray appellation in the winemaking village of Vernou sur Brenne is rather special.

4 small parcels of vines surround the house. North, South, East and West. Each one giving a single wine that has singular characteristics, each one a product of the ground upon which the grapes are grown and the care and attention given to them throughout the growing year.

The South parcel gives the richest, roundest, fattest wine and tends to be picked early. The North parcel gives a wine of tighter, leaner dimensions.

We visited last week and had the chance to taste the individual wines from barrel – a rare chance to see the marked differences in the wines as the four wines are blended together to create just one each year that truly reflects the vintage.

Sitting in the kitchen of their beautiful home as the wind blows outside, we taste the finished wines. Each vintage is remarkably different. Some dry like the 2017 and some with a little residual sugar (the 2016 is delicous and a marvellous match for spicy hot food).

You can’t just turn up at Le Clos de la Meslerie but with a phone call in advance they are happy to see you. Small estates such as this are run by the owners who do everything from pruning, picking, winemaking, marketing and selling.

Le Clos de la Meslerie is an organic estate and one of the parcels is worked by horse. Raised on a hill, it’s an idyllic place to be and rarely suffers from frost unlike many other vineyards around it.

The wine retails at 25€ a bottle and can be found in specialist wine shops in the Loire and Paris and New York.