What’s going on in the Loire valley vineyards in June? 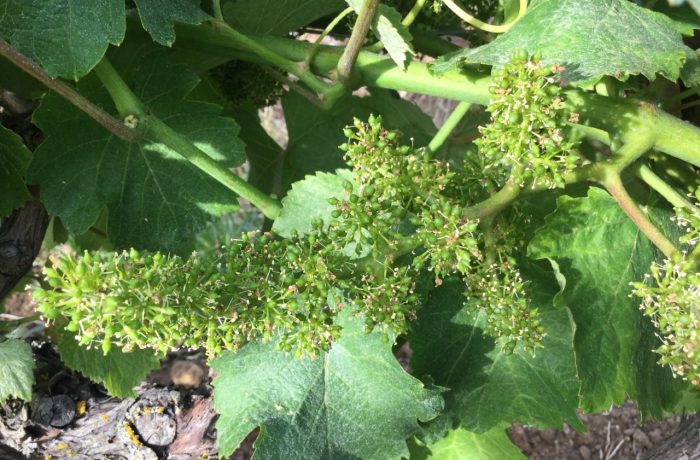 Well it’s been a strange month. For the first three weeks of June the weather was rather dull and cool. We’d cleaned the wood burning stove and decided that fires were behind us but then we had days and days of blustery weather interspersed with rain.

Growers were forced to get out and treat the vineyards several times because mildew is always a problem with these kind of weather conditions.

The vineyards came into flower and for the most part have moved on to the next stage which we call ‘fruit set’ in which you can see teensy berries starting to develop on the bunches. Some parcels are more advanced than others

And then, suddenly out of nowhere the temperature soared up to over 40°C as France had a mini heatwave for 4 days. Growers were rising at daybreak to get out and continue their work in the vineyard before the scorching sun made it impossible. Winery doors were kept firmly shut to keep the heat out and everyone struggled to keep cool.

Luckily for us the Loire, we’ve not seen evidence of damage in the vineyards but in the south of France, where temperatures got up to 45°C, many vineyards have been burnt. It looks as if someone has passed by with a blow torch and some growers have lost more than 30% of their harvest.

As the heatwave passed, growers were able to get back out and carry on their work as normal. Vines are being tucked in and secured, the tops are being trimmed and suckers are being removed.

The weather for the first couple of weeks of July looks more stable with warm temperatures (not too hot) and some possible rain. Water reserves are low and the level of the Loire very low so there is hope that we will have sufficient water reserves in the ground to allow proper maturity and development as time goes on.