What’s been going on in the vineyards in March? 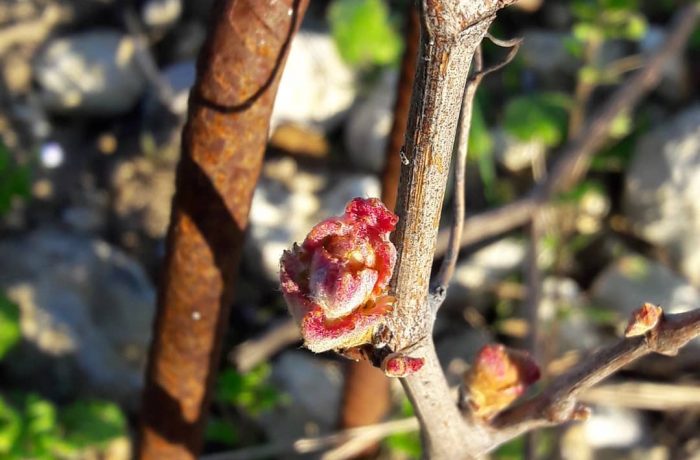 Well the hot weather during the second half of February drifted away and we returned to more normal average temperatures for the time of year. We’ve had a few frosts early morning and then the temperatures have settled in the early teens during the day. It’s also been quite blustery and gusty but we’ve still had our fair share of beautiful Spring days and with the earlier fine weather, the trees are in blossom and the daffs are out.

We have buds appearing in Saumur Champigny, the Layon valley and here in Vouvray. Another early start to the season which will have growers worrying for the next 6 weeks or so.

There’s been plenty of other action in the vineyard too. Posts are being replaced (our neighbour Thierry Cosme has 600 to replace as machine harvesters damage the posts particularly if the weather has been dry in the run up to harvest). Base wine is also being bottle for the second fermentation in the cool limestone cellars.

60% of total production in the Vouvray appellation is sparkling so things are very busy around us. Wines in the Vouvray appellation are made in the same manner as Champagne. A first fermentation takes place in tank immediately after the harvest and then in the Spring, the wine is mixed with additional yeast and enough sugar to add a couple of percent alcohol. This is then bottled, sealed with a beer cap and put into the dark cool cellars where the second fermentation takes place over a much longer time period (it’s harder for the yeast to work in cooler conditions). The wine (which is now sparkling as the CO2 is trapped inside the bottle) spends a number of months sitting quietly on its yeasty deposit. The minimum is 9 months but many growers leave the wine to its own devices for much longer. This adds roundness and mouthfeel to the wine as well as giving it more toasty, yeasty aromas and smaller, more elegant bubbles.

It’s been interesting talking to our neighbour and grower Thierry Cosme. He manages 10 hectares of land by himself with one employee and has had a hard time these past 10 years with 6 years of frost or hail damage among them. He, like a lot of growers is happy to have a cellar full of wine from the very successful 2018 vintage after years with severely reduced yields. His son is currently studying in Australia and he’s hoping he will come back and take over the business in the next year or so although says he is not counting on it!

I’m hoping very much that my report for April will be free from frost damage but of course I’ll keep you posted as we go along.