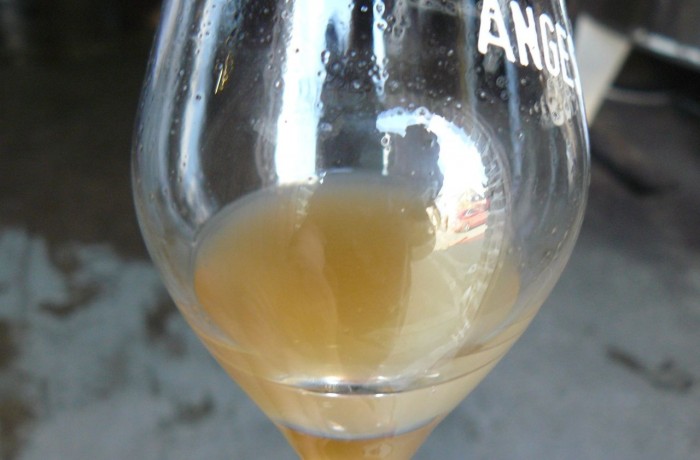 The 2014 vintage is drawing to a close here in the Loire with the last passes through the vineyards of the Layon taking place over the weekend.  Some Chenin was still hanging in the Layon on Sunday but I dare say with the break in the weather today and strong rain, this marks the end of the harvest for most people.

A strange year weather wise.  Articles were being published this time last year saying  we were about to experience the coldest winter for 100 years but I can count on one hand the number of days when the temperature dropped below zero. Good in some ways but better to have a really cold spell to kill off viruses and diseases that lurk in the vineyard if weather conditions permit. Spring was mild and warm, no problems of frost during or after budburst and almost perfect conditions for flowering (sunny and breezy).  Summer saw some nice sunny days with a fair bit of rain until August when it seemed summer was over all too soon.  Organic growers treated the vines for mildew about 9 or 10 times this season (compared with the very wet 2012 when growers sprayed around 23 times).

Reports from around the region are positive and we should be seeing some nice wines this vintage in all areas from Sancerre to Bourgueil, Savennieres to Muscadet.  Yields have remained moderate after two extremely difficult vintages but grapes were brought in ripe and clean for the most part.  This season was saved by the wonderfully sunny September that made up for the rather cool and dull August.  It’s not unusual to have a fine end to the season here in the Loire (in fact I would say we have a lovely sunny end to the season more often than not), but if the weather up until that point has been unreliable then it can make or break the season.

This is a huge relief to the appellations of Bougueil, St Nicolas de Bourgueil, Saumur Champigny and Chinon who have had a very tough time over the past couple of years.  Of course quality producers will always make a decent wine in all years whatever the vintage conditions but if the weather doesn’t work in their favour they are frustrated by a lack of concentration in their red wines.  Well made reds from 2012 and 2013 have lovely fruit and freshness but are for early drinking and not for contemplation or putting to one side.

Also, heaving a huge sigh of relief in 2014 is the appellation of Vouvray which had a catastrophic year last year with the hail storm of June 17th.  A third difficult year in Vouvray would have signalled the end for many growers.

Domaine de la Cotelleraie in the St Nicolas de Bourgueil appellation reported yields this year of 42 hl/ha – a substantial increase on previous years but not quite as high as they would like.  In the Layon, Pithon-Paillé reported yields of around 27hl/ha – much better than their 11 and 7 hl/ha for the previous two years.  In Touraine, Lionel Gosseaume was delighted with the quality of his Sauvignons saying that the grapes had great concentration and aroma. Sancerre had better luck with yields coming in at around 60hl/ha so growers in the Central Vineyards region are smiling once again.