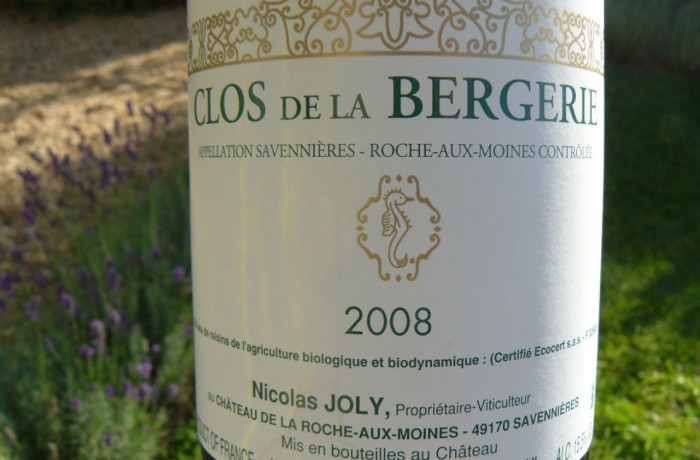 It’s been a while since we had a bottle from Nicolas Joly’s estate in Savennières. I’m a big fan of the 2008 vintage generally for Chenin as it has a wonderful floral note on the nose that is generally easy to spot.  We always drink Savennières straight off the rack and avoid putting it in the fridge as this dumbs the wine down with the result that you miss out on all the complexity of aromas and flavours.

This Savennières Roche-aux-Moines has a rich golden colour. If you were blind tasting  you’d be inclined to think it’s older than it is.  There’s a whiff of vanilla and grapefruit on the nose with an exotic note that creeps in.  It’s a sort of pineapple, ginger, honey note.  Quite intense and a rich slightly medicinal angle reveals itself too. There’s the impression of high alcohol coming from the glass.

This wine was harvested very late and there were 5 tries (passes through the vineyard to collect only the very ripest grapes). Fermentation took place in oak (not new) using only natural yeasts. It was racked twice and stirred to keep the lees in contact with the wine.  Finally it had a light filtration and was bottled with minimal sulphur.

The Clos de la Bergerie is a 3,2ha plot on a mostly east facing slope dominated by schist and quartz.  Chenin loves this type of soil and expresses  fantastic minerality under these conditions. The slightly bitter grapefruit  (sometimes quinine) note gives lovely freshness to a rich, powerful wine.

On the palate, it’s big and structured but the really high alcohol seems to dominate.  At 15,5% it’s practically the level of a fortified wine so not to be quaffed without risking a severe headache. It comes across as a classy wine but I’m not quite sure how it will develop over time.