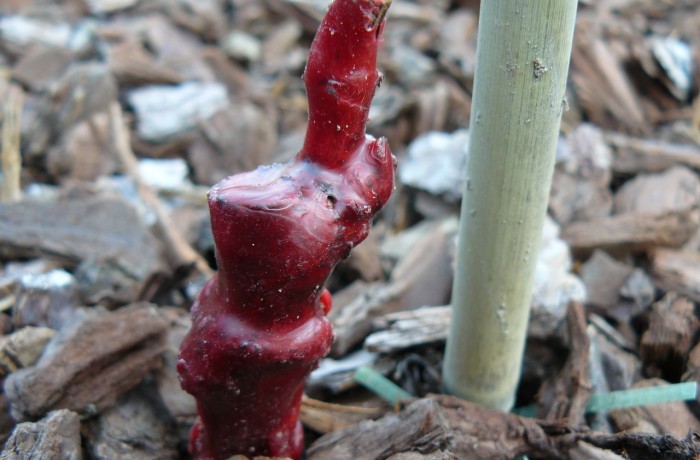 Allegedly a certain Monsieur Borty imported a case of vine cuttings from New York in 1862 and with it came the dry leaf devastator ‘phylloxera’ which was to practically wipe out the vineyards of France in the 50 years that followed.

Did you know that the solution to the problem was (and still is) to graft all French vines onto American rootstock?  Well it wasn’t quite so simple mid 19th century and in between identifying the problem and finding the solution all manner of things were tried in an attempt to stop it wiping out France’s national treasure – wine.  One has to remember that Darwin had only just published his revolutionary book  On the Evolution of Species in 1859 and  his theories of evolution and natural selection were considered daring and controversial.  This was a country facing a national crisis and as such divided itself into those who thought grafting the way forward and those who put their money behind a chemical solution.

Carbon bisulphide (an alternative form of carbon disulphide) was already  recognised as an effective insecticide when phylloxera first hit France.  A difficult treatment, it vapourised at room temperature so required ‘injecting’ deep into the ground.  Giant syringes were produced and groups of men called ‘piqueurs’ used to administer the treatment in the vineyards, although growers remained sceptical as to its efficiency.

A reward of 300,000 francs was offered by the French Government to the person who could come up with the answer but the money was never paid out.  In fact it took many years to understand the lifecycle of this pest, naked to the human eye and having many forms before it was finally accepted the solution was to graft onto American rootstock that had, over time, become resistant to it and could offer vitis vinifera (the European vine species) protection against it.

The picture I posted yesterday on the blog is of one of the giant syringes used to inject the Carbon bisulphide into the ground.  This was just one of a large number of different theories put to the test that ranged from the bizarre to the ridiculous.

Phylloxera still exists today and so remains a threat to vineyards.  Interestingly, the only European grape variety that has a natural resistance to the pest is the Assyrtiko, a Greek variety planted in Santorini.  All other vines are grafted to protect them.

If you are enthralled and would like to read more I can thoroughly recommend Christy Campbell’s book Phylloxera – How Wine was Saved for the World’, published by Harper Perenniel.  It’s a fascinating read that tells the story from start to finish.