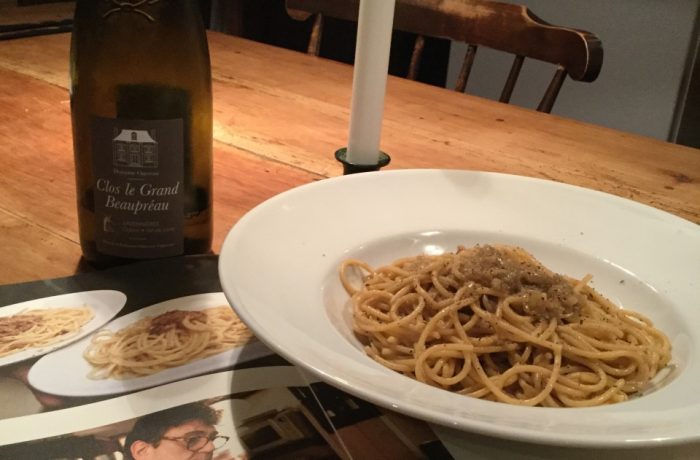 Such an easy dinner and one that is really rich in flavour. It’s hard to believe there are so few ingredients. This recipe comes from the Polpo cookbook and apparently used to be served during lent. It’s a classic dish from Venice and in the past sardines were used instead of the anchovies used today.

I sort of halved the quantities for 2 of us and didn’t measure the wine.

Basically it’s a large onion sweated down in a couple of tablespoons of olive oil until it’s really soft and caramelised to which you add about 15 to 20 anchovies (the salted kind that you find in a tin or jar). You then add about half a glass (or a bit more!) of dry white wine and squish it until it becomes a paste.

You cook the spaghetti (al dente) and keep some of the cooking water. Add the pasta to the paste and stir to cover adding a little of the pasta cooking water to loosen it and a decent knob of unsalted butter. Voila!

It’s incredibly tasty and basically a store cupboard meal.  We served a Savennières from Domaine Ogereau which was certainly up to the task. Great complex Chenin from a small and highly regarded parcel called Clos le Grand Beaupréau.