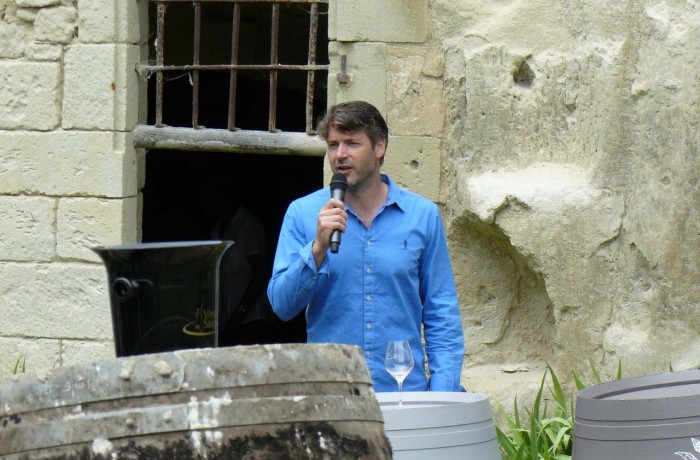 High quality wines have been produced in the Loire valley for many years now, yet it still doesn’t seem to enjoy the same popularity for its wines as do regions like Bordeaux or Burgundy for instance.

There are many highly skilled winemakers in the Loire that work tirelessly to produce top quality wines of varying styles from whites, reds, rosé & sparkling.

The team here at Le Tasting Room, was very lucky to be invited to a one day event held by Arnaud Lambert of Domain de Saint-Just and we wanted to share our experience with you via our blog.We arrived at domaine de saint-just, the 40ha site purchased in 1996 is home to the highly talented wine maker Arnaud lambert,

Almost 90 guests had been invited to spend the day with Arnold and his staff who were going to show us more about the organic principles Arnold and his team follow, both in the vineyard and the winery which enable them to produce wines of such great character and quality.
Arriving around 10:00am we were greeted with coffee and chatted to other guests whilst waiting for everyone to arrive.
Everyone was given a name badge and then provided with a glass of the beautifully crafted 1948 Crémant, produced from 100% cabernet franc – a gem of a wine.
With no time to spare we were all chauffeured to Arnauds Clos Moleton parcel where we found Arnaud hard at work ploughing the narrow walkways between the vines tending to his soil with the plough being pulled along by horse, this is far healthier for the soil avoiding soil compaction that you would get if using a tractor.
Arnold went on to explain the various different methods and practices he follows to ensure he operates organically and how these practices benefit the vines enabling him to produce the very best wines he can. 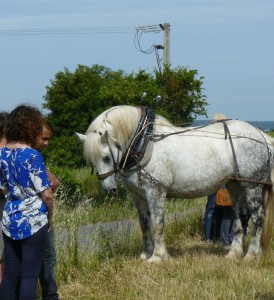 Squarlette the horse, another hard working member of Arnaud’s team

To show us how these practices effect the quality of the finished wines we tasted his 2005 Clos moleton, which was his first vintage followed by the 2009 Clos Moleton, with the latter having much more finesse and balance,

This surely is testament to the hard work and dedication put in by Arnaud and his team to achieve such great results.

Once back at the winery we were allowed to explore Arnaud’s cellars, the vast network of caves hollowed out of the limestone where the next vintage is patiently aging in the cool darkness of these troglodyte dwellings.
A tasting of Arnaud’s range had begun in earnest on the lawn so we picked our spot and listened intently as each wine was described in great detail while a team of wine waiters worked their way through the sea of guests ensuring everyones glass was primed with the correct wine matching that of the one being described at that point in time.
Everyone seemed very impressed with the sheer quality of Arnauds wines, the reds showing a good balance of crunchy fruit and hints of complexity whilst the whites were clean and fresh with well integrated fruit but not overwhelming on the palate, the crémants were refreshing yet softly melted away in the mouth leaving a wonderfully clean finish.
The 1948 Crémant rosé, named in memory of Arnaud’s father “Yves” was a show stopper for myself, with its intense flavors yet refined subtlety the old saying, “an iron fist in a velvet glove”, just doesn’t do it justice.
Once we had made our way through the range we moved to the patio area where a wonderful selection of vegetable, seafood & chicken appetizers awaited us, swiftly followed by the team of waiting staff arriving with the 1948 cremant blanc produced from 60% Chenin and 40% chardonnay, another wonderful example of Arnauds expertise at work.
We were soon seated for the final leg of the day which was a 5 course tasting menu matched with Arnauds top cuvees, and what a treat this would turn out to be.
Proceedings commenced with a tartare of salmon, monkfish, fleur de sel and pink grapefruit, served with Cuvee de Saint Cyr, a 100% Chenin blanc aged for 12 months in new and used oak barrels.
With its white flowers, vanilla and mineral edge this worked superbly with the delicate flavors of the fish.

Next up was a risotto of fish served with the Clos David, 100% Chenin aged in used oak barrels for 12 months, with the rich citrus character cutting through the creaminess of the risotto this was a good choice of flavours and textures that worked well.

Steak tartare was served next and paired with the Les Terres Rouges, a 100% Cabernet Franc aged in stainless steel, this wine had a freshness that cooled the effect of the Dijon mustard from the tartare yet enough good quality fruit to really add flavor and structure to each mouthful (my personal favorite)

This next course, braised ox tail and black pudding in crumb with creme fraiche was hugely enjoyable and even more so for being served with the Clos de Tue Loup, this wine is a 100% Cabernet Franc with 12 months in used oak,
The wine had ample dark fruit and softened tannins which fused fantastically with the black pudding and ox tail and was further complimented from the cooling effect of the creme fraiche.
By this point I was starting to wonder what the finale to this excellent dinner would be, and with that said the next course arrived.

A quenelle of local goats cheese served on a butter sablé biscuit with an apricot dressing paired with a Clos de la Rue, a wine produced from a 100% Chenin blanc aged for 24 months in new and used oak barrels, with its tropical fruit flavors and zippy citrus edge it was just enough to tame the richness of the goats cheese.

A great finish to this afternoon of vinous and gastronomic discovery complimented further by a lovely warm afternoon.
This event was a superb way to showcase the skill and talent of Arnaud Lambert and his team who have proven they are more than capable of producing some of the most expressive,affordable quality driven wines in the Loire valley.