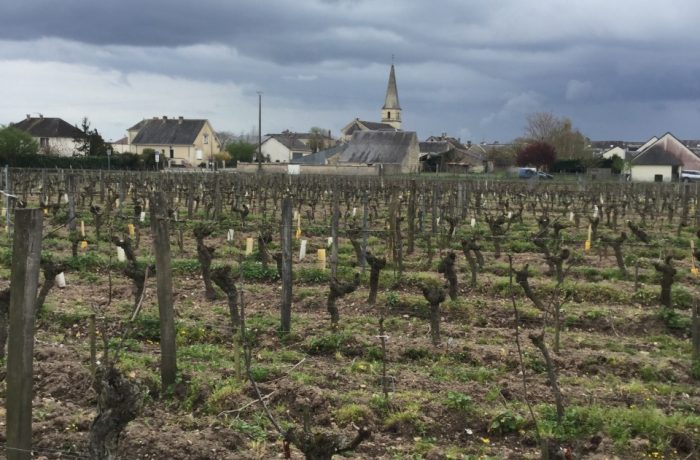 We are still on the count-down to budburst. The weather remains quite cool but temperatures look like increasing at the beginning of next week so it won’t be long now.

We noticed while driving through the vineyards of St Nicolas de Bourgueil and Bourgueil today that practically no-one has tied their vines down. What does that mean you may ask?  Well, normally, when the vines have been pruned (and in these two appellations it’s normally a Single Guyot system which is one long cane with a spur on the opposite), the canes are then secured to the fruiting wire. There is a good reason for this. If you leave the cane upright and facing the sky, the buds at the end of the cane will burst first as they have what we call ‘apical dominance’. By securing the cane to the wire you make it horizontal and so you have a more even budburst. But, of course, tying the cane down means that it is closer to the ground and this is why growers have not secured their canes to the wire.

If the canes are secured to the fruiting wire and there is a ground frost, they are closer to the ground and therefore more likely to be damaged. It’s a preventative measure that we have seen in the past two years in this part of the Loire where late frosts have had a devastating affect upon these two appellations.

Where we are in Anjou (just 45 minutes away), all the vines have been tied down for some time. Anjou has not suffered the same degree of frost damage in recent years so has not taken this measure in the same way.

By leaving the canes unsecured it means a lot of work for the growers after budburst as it is harder to tie down the canes when there are already green shoots on the cane.  It takes longer and you have to be much more careful.

But, a third year of late frosts in these red wine appellations would be hard to support.