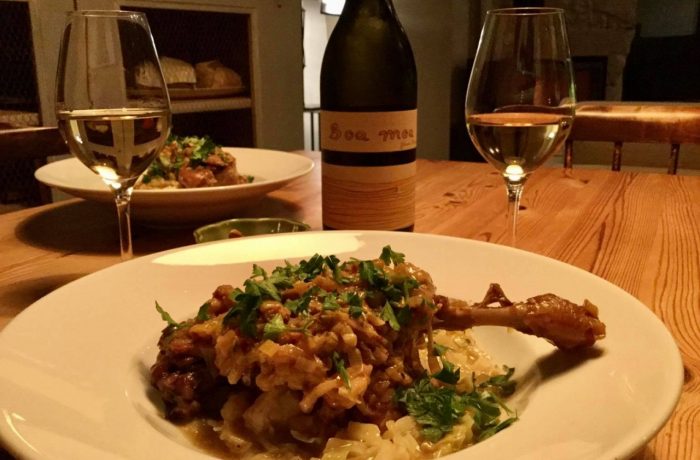 Woke up with a thundering headache this morning. That’ll be the sulphites in the wine you drank last night then! No! It won’t be that but it might just be the histamines.

There are a number of compounds in wine called biogenic amines. These are compounds that occur naturally during the winemaking process and include histamine, tryamine, putrescrine and cadaverine (thanks Wine Folly).

High levels of these compounds in wine can lead to flushing, headaches, nausea and fatigue. If you suffer from hayfever (which I do) you may find yourself sensitive to this like I am.

It’s hard to avoid wines that high levels of these compounds because there is little research done to establish the levels and little data exists.

Malo-lactic fermentation increases levels of biogenic amines (but nearly all reds undergo malo and lots of whites too) and generally reds have higher levels.

Suffice it to say I probably didn’t drink enough water and maybe had one glass too many before we sat down to eat. But, the headache I have today doesn’t reflect a monumental night on the booze.

Yesterday afternoon I made some keto-friendly bread. I’ve been trying to cut out carbs for a while (and only a while because I love my carbs) in a vain attempt to lose the couple of kilos that I put on during the first lock-down.

It took me weeks to even source the ingredients. Suffice it to say that by and large the French aren’t very interested in these faddy diets (cutting out gluten, cutting out carbs etc) and so getting my hands on coconut flour, chia seeds and psyllium husks proved a bit of a challenge. I was determined to try and find them locally before giving in to Amazon and eventually succeeded.

And so yesterday afternoon I made my first keto loaf after spending hours researching all the different recipes on-line.

The result is something more like a cake in texture. A million miles from bread (despite the hundreds of reviews from people saying ‘it’s the best thing since sliced bread’ if you pardon the pun). Anyway, I’ve duly sliced it up and frozen most of it to bring out on those days when I need a vehicle for butter.

Nigel found the chia seeds in the kitchen and asked what they were. To be honest I had no idea. He tasted them and said they taste of nothing. That’s true. Apparently though they’re a superfood! A tasteless superfood that expands in your stomach. High in protein and high in everything else it would seem. How come chia seeds have escaped me before now? I know why. They taste of nothing. I’m sure they’re good for me.

Don’t worry, I’m not taking the low carb thing too seriously. Just a bit of a cut down on carbs and sugar in the lead up to Christmas.

Nigel was on dinner duty tonight. Slow roasted duck with lots of fresh ginger and leeks and a hint of chilli. Served on crushed buttery new potatoes (the red ones with the skins left on).

Jean Francois Merieau’s Boa Moa was our wine of choice. I just had a teeny amount this evening. Not up to drinking wine with a headache. Our last but one bottle of this lovely Sauvignon Rose. It was a pretty good match for the spice of the duck.