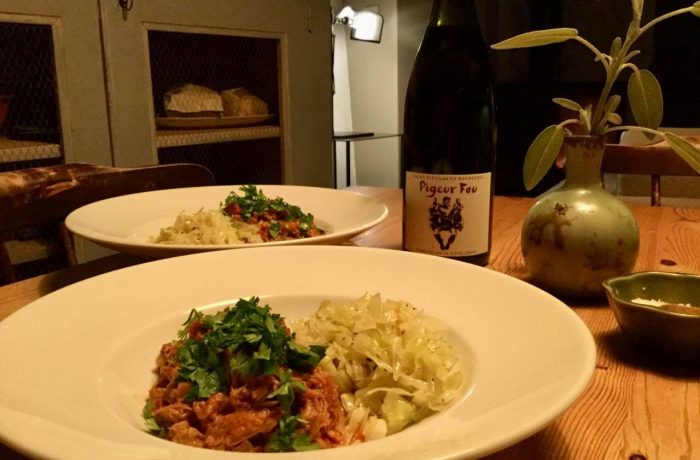 Up in good time today. It’s market day and it’s a while since I’ve been. Too long in fact.

Chatting to Louisa last night spurred me on. We must continue to support our local producers during this second lock-down. And so off I went.

We love the markets here in the Loire and the one in Amboise is particularly good. Such variety and choice, so seasonal and fresh. It really is foodie heaven.

The down side of the market (if you can call it a down side), is that it’s very easy to get carried away and spend loads of money.

Seasonal fruit and vegetables are probably less expensive at the market than in the supermarket but fish, meat, charcuterie and cheese are all much more expensive – but much higher quality. In the end you get what you pay for. The key is to buy carefully, not to overbuy (to avoid waste) and eat great meat and cheese a little less often.

I ‘happened to bump into Louisa’ and so we shopped together (keeping the required distance between us of course).

First stop cheese. Louisa had already bought hers and warned me it was quite expensive. We have a no compromise on cheese so I went ahead anyway and bought a Langres, a Camembert and a piece of Vacherin Mont d’Or that was threatening to run away. 16 euros for that. Didn’t seem too bad to me. Then I learnt that Louisa had bought a large chunck of Gruyère Suisse which is 38 euros a kilo! That explains that then. The best of the hard cheeses are very expensive but very much worth it. A million miles away from anything you can buy elsewhere. Aged Gruyère Suisse is divine.

Next stop, the butcher. Nigel is planning to cook a pork joint in a new way so I bought 500g of boned shoulder. That should do nicely. The rabbit terrine looked lovely so I took a slice of that for our lunch and then last but not least, some slices of cooked tongue.

I love tongue. We used to cook it at home when I was small. Tongue served with sliced tomatoes and chutney or in a sandwich with mustard. Delicious! I know some people can’t get over the fact that it’s – a tongue. We both love it.

Then on to the bakery. A baguette tradition s’il vous plait and un part de flan. Flan is a classic French dessert. It’s simply a puff pastry base filled with a firm vanilla custard filling. That’s a treat for Nigel. He loves flan and I can’t remember the last time we bought some.

I then walked into the centre of Amboise to the organic shop to see if I could find some psyllium husks. No luck so I bought some coconut oil for my stir fries and then strolled back to the car via the other little épicierie that sells things loose, O’Petit Vrac. Success! That and half a dozen eggs that I couldn’t resisit (they looked all grubby and natural) and I was back home in time for coffee.

That really did me good. I got out in the fresh air. The market is a delight and would put anyone in a good mood. I had a chat with Louisa. We bumped into a couple of other people we know which felt like some sort of social interaction. I supported some small independent shops and – it got me out of the house.

Nigel was delighted with the flan. Most countries have their own equivalent. In England we have the nutmeg heavy custard tart and in Portugal the addictive Pasteis de Nata. The base of them all is similar – cream or milk, eggs whole or just the yolks, vanilla, sugar. It’s the consistency that varies. The English custard tart is more ‘eggy’ and doesn’t contain any flour whereas the French flan has cornflour so is heavier in texture. This particular one was rich and creamy with a lovely caramelised top and good flaky pastry. Such a simple looking dessert but so moreish.

Back to the pork shoulder. Basically, you cook the meat in a casserole with a lid at an extremely low temperature for hours. Just the meat (well seasoned) and nothing else. This is Michael Ruhlman’s method in his book From Scratch.

As the pork slowly heats up, the fibers tense up and water and juices are squeezed from the meat, filling the pot with liquid and vapour. Several hours later and you have pork that you can pull apart with a fork. Then, you can take it in whatever direction you like.

Can that really work we wondered? Well yes. It took 4 hours at 130°C to cook our 500g piece of boned shoulder. The only thing left to do now was to decide what we wanted to do with it. You can do down the BBQ route and make a pulled pork burger, down the Chinese route and serve it with hoisin, sesame and garlic, you can go down the Hungarian route and make a goulash.

That’s what Nigel decided to do. He cooked a chopped onion with a little salt until tender then added sweet and smoked paprika, cumin, black pepper some chilli flakes. In went a glass of red wine and a tin of tomatoes and that was simmered for about 15 minutes.

The pork (pulled apart into big shreds) then went into the pot with all the juices and that simmered for about 20 minutes before he added half a cup of crème fraiche. Sprinkled with flat leaf parsely and served with buttered cabbage it was delicious and comforting.

One of the nicest things about cooking the pork this way was the enticing aromas wafting around the house all afternoon. As Michael Ruhlman says ‘the smells of food cooking, which are invariably associated with being nourished and taken care of, relax us.’ He’s right there.