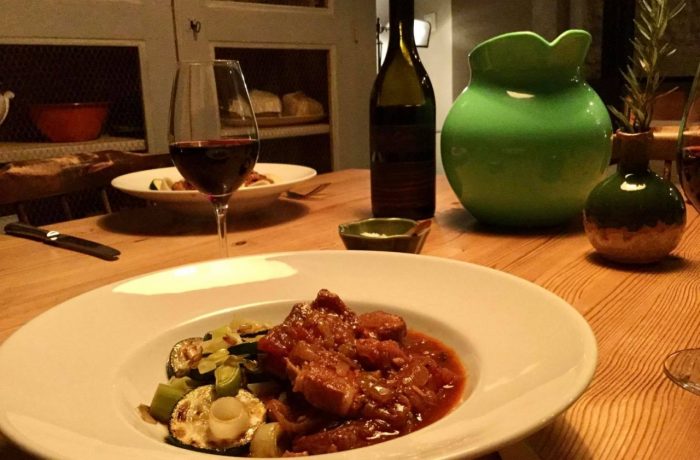 Well would you know it. We woke up this morning to a sharp frost. The first of the season.

I don’t know why it didn’t cross my mind. My friend Debbie in the UK posted on Facebook last night that she’d put the fleece up in the greenhouse and doubled up her cat’s bedding. I asked “Is it going to be chilly”.

Oh, I thought. Never thought about us here in France. Apparently the temperature in the UK was forecast to drop to -7°C. I’ve no idea what the temperature here was this morning but it’s very cold.

Downstairs early this morning. Kettle on. Radio on. What’s the news from the US? No clear results as yet. The Republicans have taken Florida (considered to be important), other critical ones to follow today. It’s neck and neck. This is going to rumble on for a few days.

Back to bed with a hot water bottle, second cup of tea and The Body. Half an hour or so of reading before I get up and properly face the day. The Body is addictive but rather gruesome. All sorts of tales that slightly make your stomach churn. Best not read it too close to meals.

Today’s Corona news is that children under the age of 10 will not have to wear masks to school after all. The Government directive instructed all children over the age of 6 to wear a mask to school but this has been overruled by the local prefecture. And on it goes…

Finished and sent off the translation this morning. It was a brochure for a local Vouvray winemaker. The domaine sells a lot to the US and information in English is definitely a bonus. Doing translations is interesting. It’s a two, no even three stage process.

First I’ll do a quick direct translation. I’ll type out exactly what it says in French but in English. Then, I’ll look at it. There will be sentences that are semi-coherent and others that seem totally odd. What would we say if we were explaining it in English? Often, I’ll flip the sentence around completely.

It’s true to say that the English are more direct and less poetic than the French. That can be a plus and a negative. When it comes to wine (and of course that’s my area of expertise), over romantic descriptives can come across as smarmy when translated into English. In French they sound wonderful and evocative. Put them into English and it doesn’t work.

So a second version ensues. What I’m looking for is something that ‘sounds’ like it was written in English in the first place. You don’t want a translation that comes across as a translation in your head when you read it (if you follow me). It needs to read fluently and coherently. Sometimes it’s best to leave a word in French; like ‘terroir’ for example or ‘vigneron’. Lieu-dit on the other hand – no one in the US or UK would understand what that means so you have to find another way to explain it.

“Well what is a lieu-dit then?”, I hear you ask? Well, the direct translation would be “said place”. Umm that doesn’t help does it. A lieu dit is a small area that is recognised and marked upon local maps. It could be a forest, a field or it could be named after a person. In English the word is similar to hamlet although a hamlet implies a small rural settlement without a church. A lieu- dit does not necessarily have habitation.

As a grower, if you own land that falls within the boundaries of a lieu-dit, you have the right to put that name on the label.

The second version done, I’ll then leave it for a while and come back to it. Sometimes things that seem really difficult to translate just come to you in a moment of inspiration when you go back to them.

It’s very rewarding when you really nail it!

After a few nights with lovely dinners but moderate wine pairings we hit the jackpot this evening.

I made an easy casserole using belly pork and a sliced smoked sausage with fennel seeds, tomatoes, tomato paste, onions, a glass of red wine and garlic. Cooked for about two hours over a gentle heat it was a practically perfect match for Jean-Francois Merieau’s, Malbec, Geule du Boa 2014.

To amuse you, I’ll give you the direct translation from his website of the tasting note on this wine, one of our absolute favourite Malbecs. The smokiness of the casserole just melded in with the smokiness of the wine. Perfection! It’s not often this good.

This is the French:

And this would be the literal translation:

A wine coming from the Côt (Malbec) grape variety from old vignes. The perfectly designed plasticity of the aroma evokes the complexity of red fruits mixed with the earth. Here, lots of verticality, no useless detours, it’s straight and sincere.

Fragrances of resin and toast will establish sensorial harmony with jugged hare.

In fact, there is an English version on the website and the translation is quite different. This is what it says:

“Gueule du Boa is a generous wine, with a pretty nose of black fruits. In mouth, a hint of acidity and a delicate and well incorporated wood aroma contribute to the neat and ample structure of this cuvee.

Powerful aromatic ideally recommended on a red meat, sauce dishes and cheeses or simply tasting alone near the fire place.”

Not bad but could be better. At least it doesn’t talk about verticality and useless detours. Talking of which I’ve probably taken you all on a useless detour myself.