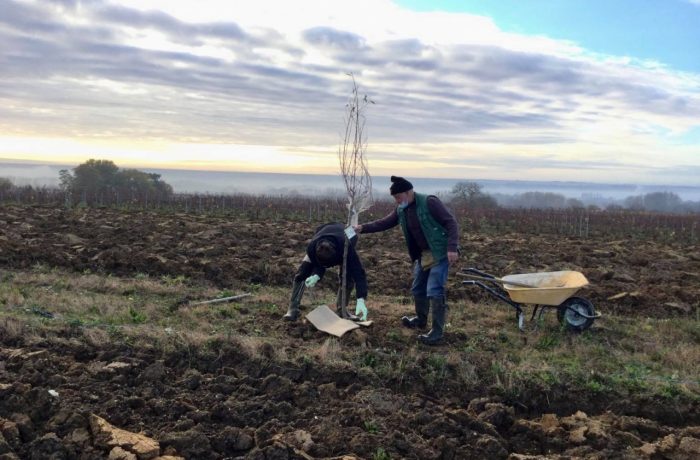 This morning we went up into the vineyards of Noizay (just above the house) to take some pictures of Vincent Carême and a group of local Vouvray vignerons planting around 30 trees among the vineyards.

It’s part of a new initiative to increase biodiversity in the vineyards and protect our countryside. Four different varieties were planted and the parcel surrounding them is due to be replanted with Chenin Blanc in Spring 2021.

Around a dozen vignerons are participating in this particular initiative. Most of them are organic but it’s not a prerequisite. Small steps to make small changes that add up over time.

The trees will provide shade for the vines, protect from the wind, provide food for the local wildlife and prevent erosion among other things.

Popped over to Vouvray this afternoon to stock up on cheese and buy a couple of bottle of Beaujolais Nouveau. A day late but I think many of us are in that situation.

It’s a LONG time since we purchased a bottle of Beaujolais Nouveau.

When I was first working in the wine trade in London in the early 1980’s it was a HUGE deal.

At that time it was a race to get the wine back into London as soon as was physically possible. It used to be held on the 15th November but in 1985 the INAO fixed the third Thursday of November as the official date.

I was working for Seagram at the time and we used it as an opportunity to wine and dine our West End clients. It started with a full English breakfast and Beaujolais Nouveau at 07h30, then a catered lunch and then… I can barely remember.

It was 12 hour drinking session of frankly, rather acidic, lean wine that wasn’t great for the stomach.

25 years later when I left the UK to live in France, it had died completely. The wholesaler I was working for at the time didn’t order a single case such was the disinterest.

And since then, it’s ticked over in the UK market but always been quite a deal here in France as it marks the first wines off the starting blocks.

In recent years we’ve seen the quality level creep back up again. Well made Gamay is delicious and the bottle we tried last night was just lovely. A no sulphites Nouveau from Jean Baptiste Duperray. Old vines contribute to it’s lush ripe fruit and concentration.

It was perfect with dinner. A roast chicken leg with red onions, cherry tomatoes, chorizo and garlic with smoked paprika.