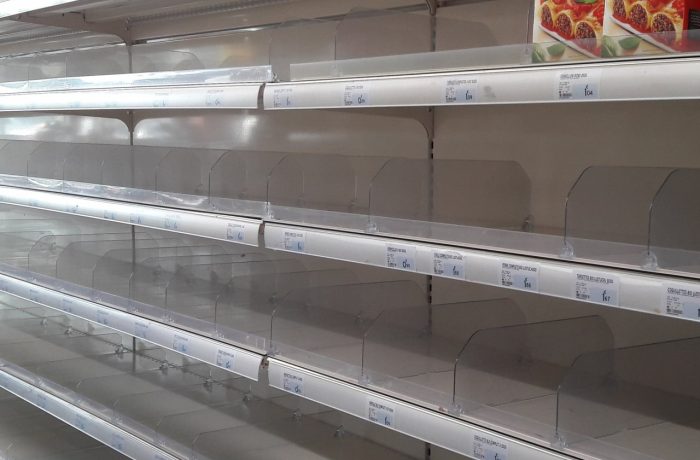 Late yesterday afternoon I arranged a clandestine meeting with Louisa up in the vineyards to swap contraband.

Louisa lives in the next village and had promised me some of her sourdough starter so I can have a go at making my own sourdough bread.

We met halfway (about a 20 minute walk for me, slightly more for her) and she passed over the bag while maintaining the required distance. It felt like a rather comic moment. We stood and chatted and she told me what to do. So much feeding and leaving, turning and waiting. I hope I’m up to this challenge.

I fed the starter before going to bed as Louisa had told me. This morning when I came downstairs it had clearly risen beautifully during the night but then dropped again. I messaged Louisa who told me that it’s bad news. I have to feed it again and wait.

I can see this is not as easy as I had expected.

Ridiculously, I felt a twang of anxiety as I drove to the supermarket this morning. Quite what I was expecting to find I don’t know. The reality was quite different. No queues, easy to park, no people panicking.

Being English clearly paid off however. I manged to buy Jacob’s Quaker oats no problem (there will be flapjack in this house), fresh semi-skimmed milk (the French drink UHT milk, I’ve never understood that) and cat food (Pesto has a preference for the most expensive organic brand that no-one else is stupid enough to buy).

Some shelves were stripped bare. No pasta, rice or pulses left. No flour (help how am I going to make my own bread?), very few tins of anything. I had a mutual mutter with a French man looking to buy rice (‘aren’t people so stupid’ – we both agreed). Plenty of fresh fruit and veg, no problem with yoghurts, meat or fish.

I think I did overstock just a teensy bit. I tried to restrain myself but perhaps gave in to the pressure just a little.

I then drove to the Boulangerie in Vernou sur Brenne. There were a few people waiting, all outside on the pavement. The sun was shining so everyone was happy to be outside. I bought 2 baguettes tradition and had a chat with the boulanger’s wife. “It was crazy yesterday” she told me. Today things are calmer.

The good news for today is that I bumped into Claude Airaud-Cabel, a winemaker friend whose husband Philippe Chigard works the top vineyard parcels by horse. He’s been way behind with his work due to the incessant rain but as the sun is shining, he’s back out in the vineyards and able to get on with his work.

Nigel was in the kitchen this evening as I went for late walk in the vineyards. He made a little ragout with one leek and a couple of carrots cut into batons that he cooked gently in a little butter, wine and water. He then roasted some cod in the oven simply seasoned with salt and pepper and a little grated lemon rind. It was light and delicious and the cod cooked perfectly to reveal big white flakes that came apart.

We enjoyed rather too much of Jean Francois Merieau’s wine this evening. His Coeur de Roche Sauvignon is one of our favourite Sauvignon Blancs. With some oak ageing it isn’t at all typical but is just delicious. With our cheese we had a glass of two of his Cent Visages Côt (Malbec).

The sourdough is in the fridge ready to bake tomorrow morning. I’m hoping this will work. It says in the book that Louisa lent me that I can cold prove it for up to 36 hours and it would be so nice to have a fresh hot loaf for breakfast.