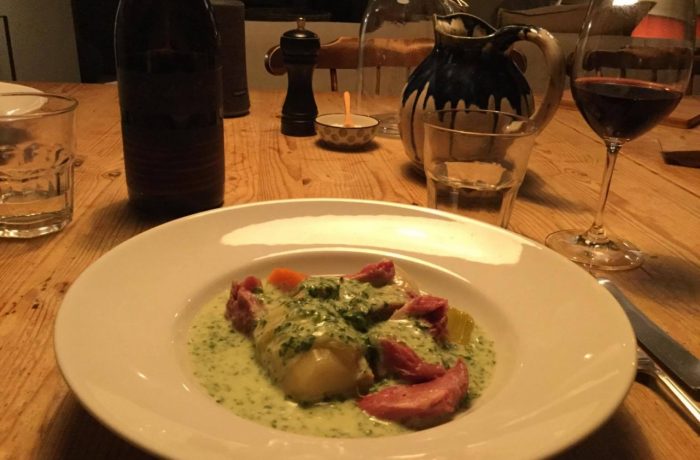 Last night before going to bed I rustled up the ingredients for a no-knead bread loaf. Could it really be that easy I asked myself. Well the answer is yes!

All you need is 3 cups of flour (any old plain flour will do – I used ‘tous usages’ T45), 2 teaspoons of sea salt, 1 teaspoon of dried baker’s yeast and a cup and half of room temperature water.

Mix the dry ingredients together and then pour in the water. Mix it all together until if forms a shaggy dough. Cover with a tea towel or cling film and leave over night. The timing on this is quite flexible.

When you get up the next morning, roughly shape the dough (you might need a bit of flour on your hands to do this) form it into a ball and recover for another hour. For infomation I went to bed at 22h30 and reshaped it at 08h00 this morning.

I put it in the tumble dryer for the second rise after running it empty for a couple of minutes which works really well when you need a warm atmosphere for proving.

After about half an hour put your oven on to it’s highest setting and put a Le Creuset or other similar pot (Dutch oven) with a lid in the oven on the lowest shelf. Put the timer on for an hour.

When the hour is up, take the pot out of the oven, take the lid off and after reshaping the dough gently into a ball again pop it in the pot. If it’s easier (and I did this) you can pop it onto a square of greaseproof paper as you can then just drop it in the pot (which is piping hot) in the paper. Make a couple of little cuts in the top of the bread with a sharp knife, pop the lid on and put it in the oven. Reduce the temperature to 240°C and cook for 20 minutes.

Remove the lid, drop the temperature to 230°C and leave for another 20 minutes. It should be risen and golden.

Take out the oven and leave to cool on a wire rack for 30 minutes before cutting.

It’s so easy and so delicious. Do give it a go.

Meanwhile I am also rebooting my sourdough starter. It seems to have gone a big sluggish.

Our confinement here has been extended by another 15 days minimum until April 15th. That’s 2 weeks done and another 2 weeks to go. It may be extended beyond April 15th but for the moment that is the new date to work to. I’m sure the Government does that to keep us feeling positive. Two weeks at a time…

Another lovely day here. The wisteria is in flower and the newly planted climbing roses are really taking off. I’m aiming to get out for a walk in the vineyards shortly and then have myself showered and looking slightly more respectable as we have commitments this evening.

Our good friends Chris and Margaret celebrate their Golden wedding anniversay today. Their party for family and friends has been cancelled so we’re all going to ‘join in’ for an apero to wish them well and share our pics so Margaret can put together a photographic record of the day. After that we have an on-line apero with our friends in Anjou, John and Sheila.

It’s a fun way of keeping in contact and something to look forward to at the end of the day.

I was reading Michael Broadbent’s obituary in the Telegraph. Michel was truly a legend in the wine trade and an influence upon many of us including me. His book on wine tasting was one of the first I bought in the 1980’s.

When asked in 2003 to describe a typical weekend with his wife Daphne he replied, “I suppose we might start with an Auslese around 11, when Daphne gets a craving. Then we would move on to a Bloody Mary or a Pimms in summer, and then a glass or two of claret over lunch with a small glass of Tawny port afterwards. In the early evening Daphne will have a whisky and soda while I might have Champagne or a sherry, always Tio Pepe. Then we might have 2 or 3 glasses of Claret. After that Daphne might have a small 1959 vintage Calvados. And, if it’s a proper dinner, I’ll have a vintage port.”

His tip for a long life of happy drinking was an afternoon nap. This sounds like a great plan during the lock-down although my cellar is probably no way as interesting as his was! I’ll drink to that and thank him for his enormous contribution to both the British and world wine trade for many years. He died this week at the age of 92.

This evening’s dinner was an old fashioned dish that takes me back to my childhood. Boiled ham with vegetables and home made parsley sauce. Basically you pop a piece of ham in a large pot, add a couple of carrots peeled and cut into big chunks and a couple of onions peeled and cut in half. A couple of bay leaves and some black peppercorns, a sprinkle of salt and then cover with water. Bring to the boil and simmer gently for a couple of hours or so until the meat is falling off the bone. About an hour and a half in you add some leeks and peeled potatoes that cook in the stock.

I made a parsley sauce using 30g of butter, 30g of flour and 500ml of milk and thinned it down using some of the stock. I then added a massive bunch of flat leaf parsely finely chopped. In the past this would have been curly parsley. We didn’t have flat leaf in the UK until much later.

We served Jean François Merieau’s Gueule du Boa 2014. A rich spicy Malbec made from old vines. The name of the wine is a play on words Gueule de Bois is a hangover in French. We were moderate so hopefull that will not be on the cards tomorrow.