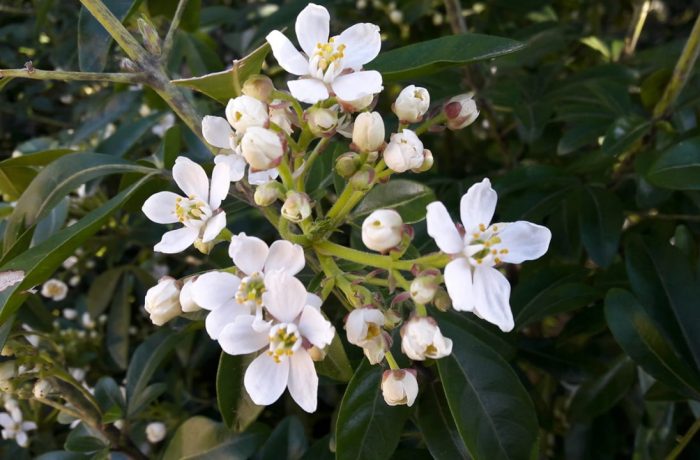 Another frosty start to the day. It seems like temperatures are going to be low for most of the week. I think of the vignerons often at the moment as they anxiously watch the weather during this tricky time.

I was looking at some stats for the supermarkets this morning for the week of March 22nd. Sales of flour were up 229% and sales of yeast and sugar up by 131%. I see I am not the only one that has taken to baking.

On the other hand, sales of sparkling wine were down 44%. That’s not good news for the producers of Crémant de Loire, Vouvray and Saumur. It seems that people still regard sparkling wine as something to open for a celebration.

It’s the opposite in this house. We open a bottle of fizz when we feel we need a bit of peps. There’s nothing like a glass of fizz to lift the spirits when you feel a bit jaded. We shall doing our very best to reverse this trend and encourage you to do the same!

My second attempt at no-knead bread is currently in the oven. I used a semi-complet flour this time and also gave it a second rise of an hour before putting it in the oven. I’ll report back but it smells mighty good.

It is good! Better than the first attempt I think. Slightly lighter in texture and with more flavour. I enjoyed it with the last of the sorrel soup. Funny isn’t it. Something you decide you don’t really like one day tastes better the day after. That was me with the soup.

My outing for the day was to post our year end accounts in the post box. What excitement! It gave me my daily exercise within 1km of the house although it was not a particularly pleasant walk. There’s been a bitter wind blowing since this morning. I did however, stop to take in the heady aroma from a hedge of Mexican orange blossom. Delightful.

We decided to try and support the little épicerie in Amboise that opened last September and so I got in contact to see what they’re offering at the moment. It has a decent selection of fresh fruit and veg as well as some local cheeses and then all the standard things you’d find in an épicerie such as flour (she says hopefully), spices and dried goods. Everything is sold loose to avoid plastic packaging. If I place our order before tomorrow evening I can go and collect it at a given time on Thursday. Going to give that a go. We need to support small local businesses or they will go under.

Dinner this evening was meat free. A chickpea and aubergine curry with basmati rice and a mint raita.

To that I added 200ml of coconut milk and the same quantitiy of water. I tasted for heat and decided it was a bit mild for us so added a couple of teaspoons of my favourite crispy chilli mixture (it’s a mixture of chilli, soy grains, garlic and spices in oil).

In went one 400g tin of chickpeas and half an aubergine cut into small squares. It simmered on the top for about half an hour.

We settled in front of the fire and watched To Catch a Thief. We both love old films but when you watch them, much of the dialogue is totally inappropriate to today’s world. It’s a bit off-putting.