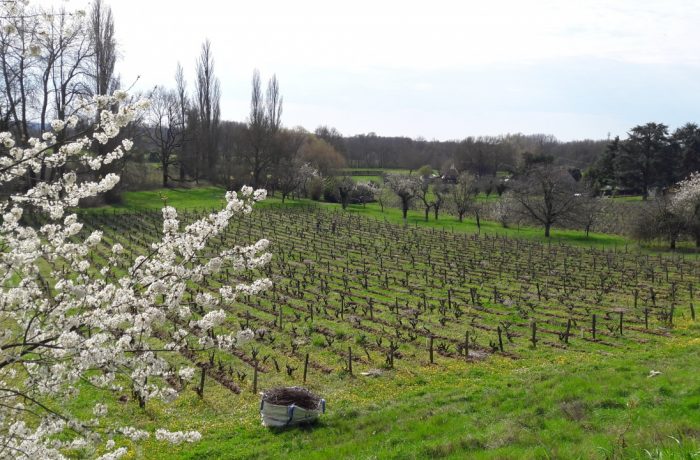 Another sunny start to the day. As I looked out of my bedroom window I could see my neighbour ploughing the little parcel of land opposite his house in preparation for planting this season’s fruit and vegetables. The grandpa was following behind giving advice. Advice that was sought? Probably not!

I just received a call from my friend Yvonne who confirmed the Amboise market is open which is good news.

As she was calling me she was stopped by the Gendarmes asking for her ‘Attestion de Déplacement Dérogatoire’. She didn’t have the physical piece of paper with her so showed them the attestation on her phone (we learnt that this is not acceptable yesterday). After a slight ticking off, she was allowed to go without a fine. (Note to self – do not forget to take your attestation when you go out).

I popped out to post a letter. I chose the post box furthest away so I could get some exercise. It’s a 45 minute round trip. I walked along the ‘coteau’, the limestone hillside where all manner of houses can be found from humble cave dwelling to stately chateau.

Many of the houses are second homes but they’re all open now. I’ve never seen so many people out in the garden painting the gates, mowing the lawn, jetwashing the roof, sitting listening to music in the sunshine.

One thing’s for sure. We’re all going to have immaculate gardens in Noizay. Just no-one to invite in to share a glass of wine while we gloat at our perfectly pruned roses and stripey lawns.

I need paper for the printer.

Went to Intermarché in Pocé sur Cisse thinking that would be the best bet. No! Not a single sheet. Another thing people are bulk buying as they are forced to work from home. Maybe I’ll have better luck in Vernou.

Dinner this evening was a very spicy long slow cooked beef cheek that I served with steamed broccoli and sweet potato mash. This recipe isn’t for the fainthearted but you can avoid the chilli heat by leaving out the bird’s eye chillis or reducing the number.

I fried a couple of finely sliced onions until soft, added 3 cloves of garlic and about 4cm of ginger (both grated) and then after a minute put the seasoned beef cheek into brown.

To the pot I added half a cup of orange juice, half a cup of light soy sauce, a cup of water, quarter of a cup of mirin, 2 star anise, 3 bird’s eye chillis (reduce to 1 or leave out completely if you don’t like the heat). I then finely sliced a clementine and put that in (you could just use 3 slices of pared orange rind).

I brought it to the boil and then put it in the oven for about two and a half hours on a very low heat (130°C – 150°C) I then added 2 tablespoons of soft brown sugar and two tablespoons of dark soy sauce, took the lid off and turned the heat up to 190°C. This reduced the sauce.

I blitzed the sauce smooth before serving (leaving the cheek in the pot) but you don’t have to do that.

I like to serve a big slice of beef cheek as it looks good on the plate. As an alternative you could pull it into chunks and mix with the sauce.

We drank a bottle Arnaud Lambert’s Clos de L’Etoile Saumur 2014 alongside. All smoky, cedar wood and rich dark fruit, it’s a beautiful wine although wasn’t the best match for the chilli heat so we stopped drinking it with the beef and saved it for our Vacherin Fribourgeois afterwards. That was a divine match.

Oh, and there was flapjack today.