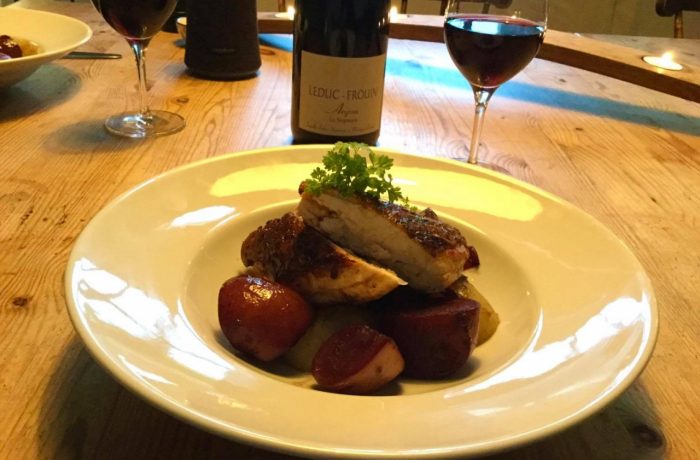 What better way to start the day than with some hot buttered toast and honey from your friend’s hives (or should I say bees?). Peter and Juliette Hahn have hives in the wooded area just next to their vineyard and the honey is divine. Such a treat.

The forecast is for rain today although it seems hard to believe as the skies are clear this morning. It says there’s an 80% chance and gusts of up to 60km an hour are in store this afternoon. Better put the parasol down in the garden just in case.

I jointed the lovely Challans Noir chicken yesterday and we had the legs for dinner. The breasts are in the fridge for tonight and I put the wings and the rest of the carcass into a big pan with some onions, bay leaves, salt and peppercorns (there were no other interesting veggie trimmings I could add). That simmered gently all evening until we went to bed. Oh, I threw in a few smoked lardons too.

What to do with that lovely stock today? We don’t have any appropriate veg for soup in the fridge.

Nigel had an idea. Use the dried Lingot beans (white beans) that we have to create an Italian style soup. And so I have. The Winter Savory in the garden is looking fantastic at the moment so I sweated an onion gently until soft, added the stock and lots of the Savory and simmered it all for an hour and a half. I then removed three or four tablespoons of the cooked beans, blizted what was left in the pan until smooth and then added the beans back.

Apparently Winter Savory is often called the ‘bean herb’ because it helps prevent flatulence (good to know!). It’s strong in flavour and is wonderful in soups and stuffings.

Both the new rose and clematis are flowering in the garden. They’re ridiculously early. The clematis, (Samaritan Jo) is meant to flower in July and the rose, (Yohan Jongkind) in May. It has the most beautiful scent. I’ve taken to leaning over and inhaling its heady aroma every morning. That alone is enough to lift the spirits.

The swallows are still darting in and out of the cave. I have it on good authority from our friend John that they do indeed return to the same place to nest. It seems that Pesto and her friend Bigi from across the road have agreed a schedule of sentry duty at the entrance to keep a close eye on things.

There were 242 new deaths here in France for the 24 hour period Saturday-Sunday, the general director of health Jérome Salomon announced last night. 152 deaths in hospital (the lowest daily rate for 5 weeks) and 90 in retirement homes. That’s a bit of good news. Clearly staying at home is paying off.

A worrying situation has arisen. We’ve run out of cheese. When Nigel broke the bad news to me I suggested that I go and make a first pick of the rhubarb in the potager. He failed to see the relevance of rhubarb to cheese. I was quite shocked he wasn’t on the same page as me instantly. If we have no cheese then we can eat rhubarb instead. Which brings me to our American friends. How can you have cheese for dessert? It’s either cheese or dessert. You can’t have cheese for dessert. Cheese is savoury and dessert is sweet. I must ask my friends from New York to clarify this for me.

The sky has gone black and we do have a little rain as promised although not the storms and gales that were predicted. I just managed to pop over the road to the potager and pick that rhubarb. I’m going to cook it in the oven with a little sugar for about half an hour and then let it sit in the dish. That’ll be nice for dessert and also for breakfast, Bircher muesli style with some Greek yoghurt I fancy.

Planning another loaf tonight (no, please, says Nigel, not another one). Just joking – actually he asked when I was planning the next attempt as he has a bruschetta recipe he wants to try and thinks my sourdough will fit the bill. Ha! I’m winning him over. Little by little he’s coming over to the sourdough side.

I’m going to try a different method tonight. More of a no-knead sourdough, still using the starter but being left overnight for the first proving and then finishing tomorrow morning before baking. I know, I know. Is this wise? Going off piste when you’re only just getting the hang of the first method? I guess we’ll see. More of that tomorrow.

This evening I’m back in the kitchen and am cooking the chicken breasts. I’ll probably griddle them and to go with that there’ll be some navets (turnips) in red wine and honey (Peter and Juliettes’ of course). It’ll be simple, perhaps a few new potatoes alongside too.

The navets are easy to do and are really tasty. If you can find teeny ones so much the better. If you have bigger ones (as I did), cut them in four and pop them into a pan where they can fit in a single layer. Slice a large red onion and position the pieces in between the navets and then pour over enough red wine to nearly cover them. Drizzle over one teaspoon of honey, season with salt and pepper and bring to the boil. Turn the heat down and simmer gently until the navets are tender and the wine has reduced. Then add a big knob of butter and stir gently which will give you a bright purple shiny glaze. They take about half an hour or so.

You can eat them warm or at room temperature, on their own as a little starter, as an accompaniment to meat or chicken or with a poached egg for a light lunch. A sprinkle of herbs lifts the dish. The chervil in the garden is pushing now so I picked a little of that to garnish our dinner but you could use anything you have to hand.

We enjoyed a bottle of Antoine Leduc’s fruity Cabernet Franc Anjou Rouge 2017 alongside. A nice weight, it has classic forest fruit character and low tannins. The bright acidity makes it fresh and moreish. 2017 produced lovely balance here in the Loire. Ripe fruit balanced by freshness and crunch.