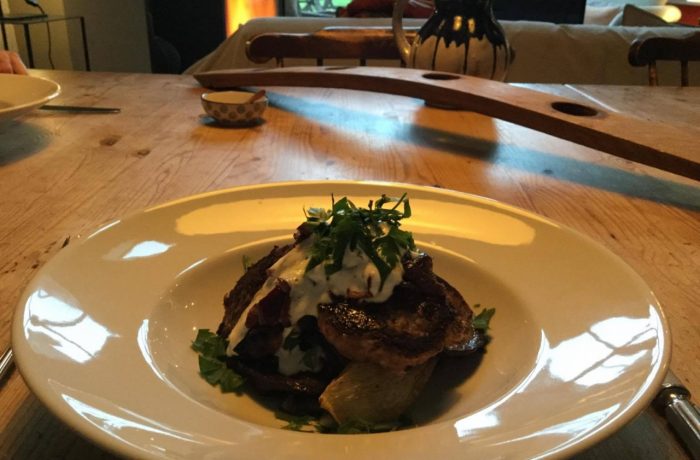 Hopped on the scales this morning. Well, hopped implies a certain enthusiasm doesn’t it? There was none of that I can assure you. I sort of crept up and very gingerly stepped on to them as if that would help.

A kilo up on last week. Damn. I thought I had things under control. Clearly not (mental note, give more to Nigel eat less yourself). Ha! If only it were that simple.

Seriously though, how lucky are we? We live in a beautiful part of France and we love what we do. Just sad not to be able to share our life and passion for the Loire, its wines and local produce with you at the moment.

Talking of cooking (she says leaping from one subject to another). I was excited to discover we can support another local business that is in peril at the moment, Le Jardin des Roys.

Eric Roy is the 10th generation of his family to grow vegetables here in the Loire close to Tours between the Loire and the Cher. He’s what we call a maraîcher in French and he doesn’t just grow your ordinary veg – he specialises in mini-veg.

Tiny, perfect, mini vegetables destined for the best restaurants in France. The 1* 2* 3* Michelin restaurants buy from him. The best bistros in Paris. And therein lies the problem. His produce is exclusively destined for the restaurant industry. An industry that is closed. Take a look at the little video below to see how beautiful they are. It’s in French but you only need to look at the pictures to see the fastidious work he does and what wonderful produce he supplies.

Like many people, he’s had to rethink his business during the pandemic and so, he’s opened up his business to the general public. People like me. I’ve ordered a panier of mini-veg for 20€ and am collecting it from a little épicerie in the village of Vouvray on Friday morning. I can’t wait to see those perfect little veggies and think of something delicious to cook this coming weekend. Something to look forward to.

Nothing so exotic for lunch today although I feel quite proud that I managed to create something to feed us both. You know what it’s like. You open up the fridge door and stand there gazing at the rather random selection of leftovers scratching your head, looking for inspiration without resorting to beans on toast or scrambled eggs.

I added a couple of big handfuls of fresh spinach to the little piece of pork belly leftover from Sunday. There was quite a bit of sauce so the spinach just wilted down and made it substantial enough for Nigel. For me, the last of the cabbage daal with the addition of half a tin of sweetcorn (left over from the corn and courgette fritters last week). A chunky piece of hot buttered sourdough toast each and there you are. A tasty lunch from practically nothing.

Nigel was upstairs decorating (yes he still is and will be until every drop of paint has run out). He called down to me. I couldn’t understand what he was saying.

“There’s a Swallow in the salon” he said”

“There’s a Swallow in the salon”.

And so there was. Poor little thing was cowering on the wall way out of our reach. He must have flown in through the kitchen window.

I opened up the French windows and shut the doors. Nigel opened up the velux window in the roof. We waited. He remained firmly attached to the wall. Oh dear, what now?

Nigel fetched a long pole that we use for dusting the cobwebs (amazed we could find that), and when I say long I mean really long, the distance from floor to ceiling in the salon is about 25 feet (7-8 metres). A little tickle from behind, two loops around the room and out he went through the velux.

Pesto nonchalantly meandered downstairs just afterwards. If only she knew.

I bought some very lean minced beef from the butcher at the market last week and was wondering what to cook for dinner this evening so decided to make some spicy beef patties. Mince that’s too lean can be very dry when cooked so it needs a bit of love.

I had 250g, and to that I added 50g of sourdough breadcrumbs that I soaked in milk, a teaspoon of ground cumin, a big pinch of chilli flakes, salt and pepper and an egg. I then crumbled in 50g of Feta cheese, mixed it all together and formed 11 little patties. They went in the fridge to rest before cooking.

I painted some chunky slices of aubergine and one bulb of fennel sliced longways into 4 with a paste made out of olive oil, ground cumin, sumac and half a teaspoon of shawarma (if you don’t have that add a little 5 spice, cinnamon and grated nutmeg or leave it out). They were roasted in the oven until golden.

The patties were fried in a tiny bit of olive oil in a non stick frying pan and then served on top of the roasted veg, dressed with some Greek yoghurt and flat leaf parsley. Pretty healthy and full of flavour.

No wine tonight but we enjoyed a Not Gin & Tonic before dinner with a few nibbles.