Life in the Loire on lock-down. 1st May. Day forty eight. 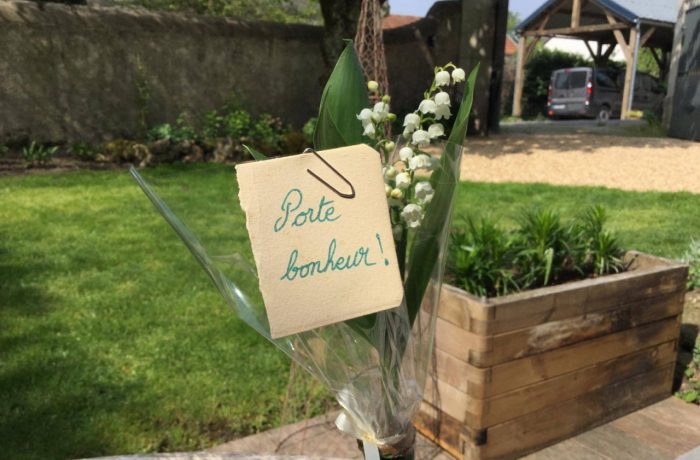 May Day is Labour Day – La Fête du Travail in France, a public holiday since 1947. It’s also a day when traditionally in France we give our family, friends and loved ones a small bunch of Lily of the Valley or Muguets as they are known here.

The tradition is said to date back to 1560 when Knight Louis Girard presented King Charles IX with a bunch of Lily of the Valley as a token of good luck. Rather taken with the idea, the king presented the ladies of the court with a small bunch each year on May 1st.

I imagine the growers are having a terrible time this year. The French normally spend around 30 million euros on exchanging these plants on May Day. It’s also the only day of the year that anyone can sell them on the street, in front of their house, in car parks. Children often make their own little bouquets and sell them for a euro each.

There will be no children out selling muguets today although at the last moment, on Thursday night, florists were given special permission from the state to sell them in front of their flower shops (not inside).

In flower language the muguet has been known as a lucky charm since the middle ages. It brings good luck and announces the return of spring and warm sunny days. Fiancés would hang a bouquet on their fiancée’s door and the ladies would count the number of ‘clochettes’ ( little bell like flowers). 13 symbolised eternal bliss.

We could do with a little eternal bliss at the moment. Let’s hope May 1st signifies a return to some kind of normality soon.

Apparently the French Government is offering everyone 50€ towards getting their bikes repaired when the lock-down is eased. A 20 million euro scheme to encourage people to get back on their bikes and stay out of their cars. The money will also be used to fund new cycle lanes and cycling lessons. I wonder how many people will take advantage of that.

Rustled up a batch of oat and raisin cookies this afternoon. They used up the last of my Golden Syrup (a very English product that can be hard to find in France). I didn’t have quite enough for the recipe so added a little honey instead. You could probably sustitute maple syrup too. That would be good.

Take spoons of the mixture and shape roughly into rounds, put on a baking sheet lined with baking paper.

Cook in the oven for 8-10 minutes. Remove and leave to cool for a few minutes before transferring to a wire rack to cool completely.

They’re sort of half way between a cookie and flapjack.

That’s better. A cup of tea and one of those cookies has done the job. Now back to work.

Things are moving very fast on the new project with Louisa at Montdomaine. She’s started painting for the recipe cards and I’ve been chatting to people in the US and UK who have expressed an interest in joining in. I really think this is going to be fun.

We enjoyed a glass of Chateau de Montdomaine’s Vouvray this evening as an aperitif. It’ll be one of the 4 wines included in the mixed case so we took careful tasting notes that we look forward to sharing with you all.

Then to dinner. Nigel bought some lovely lemon and thyme sausages from the butcher at the market yesterday so I decided to use some of them to make a pasta sauce.

I removed the skins from the sausages and made little balls with the sausagemeat. I gently fried one onion finely chopped until soft then added the sausage balls and 2 cloves of finely chopped garlic to the pan. When that had bubbled and cooked away for a few minutes I deglazed the pan with a glass of dry white wine and added the finely grated rind of a lemon.

The pasta was cooked for 11 minutes in salty water. I transferred it directly into the pasta sauce and added a little pasta cooking water (this helps the sauce bind to the pasta). Finally a heaped tablespoon of creme frâiche went in the pan along with a couple of tablespoons of finely grated Parmesan and a generous grinding of black pepper.

A little more grated Parmesan on top and some herbs from the garden and we were set to go.

As the theme this evening was veering towards Italian we opened a bottle of Cos Frappato 2018. Cherry red in colour and cherryish on the palate. Such a lovely fresh, light style. We love these kind of wines. They refresh the palate and partner so well with food.

It’s hard to believe that Sicily can make such delicate refreshing wines isn’t it? You’d think that the climate would prevent that. Not a bit of it. There are some wonderful Italian wines from the South that have lovely balance and elegance.