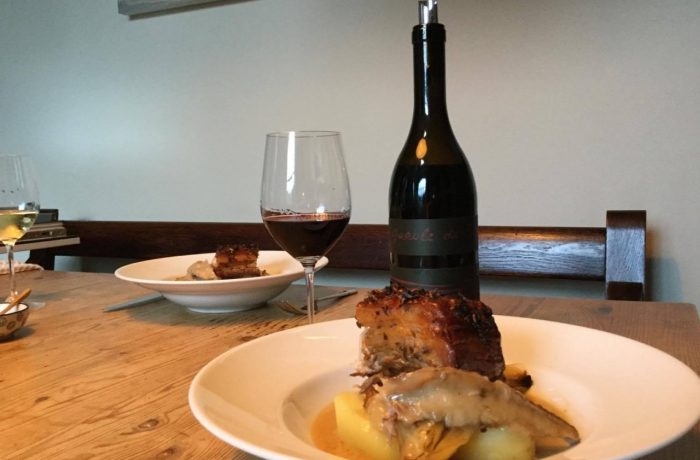 A dreary day here in the Loire. Grey and dull. It’s trying to rain but not making a very good job of it.

A sluggish start in this house. That glass of Bonnezeaux in front of the fire last night was a bad idea (well no it was a lovely idea but I’m paying for it this morning). Marmite toast and tea helped.

We pottered around the garden. Nigel planted out new lupins, roses, foxgloves, clematis and wisteria just a few weeks ago and we check on them daily to see how they’re doing.

A series of wooden logs are placed strategically all over the borders. Pesto and her cat friends don’t seem to have much respect for tender shoots pushing from the earth. It looks like an elaborate assault course. They deftly move from one to another like it’s a game while we wince hoping the plants will live to see another day.

I spotted a very beautiful moth on the clematis this morning. No idea what species it might be. Big and bold, greenish with a camouflage pattern.

The tiny spinach leaves that I so carefully put to one side last night stayed firmly in the fridge today. I’d planned a salad using them with roasted butternut squash, feta and barberries with a tangy dressing but the thought of a salad today doesn’t appeal. It’s much too cold for salads.

Out came the last of the broccoli and cheese soup that I made a week or so ago. A big bowl with a slice of sourdough and salty butter. Much more comforting. It’s funny. When I made the soup, it was a hot sunny day and it felt odd enjoying it in the garden in the sunshine so I froze what was left. Today it was perfect. Just what was needed.

Drones are being used in Nice to spread the ‘stay at home’ message. Hovering above people out and about (for whatever reason) they deliver pre-recorded messages about respecting social distancing and zoom in on those that appear to be disobeying the rules. Not quite sure how I feel about that. It makes for uncomfortable viewing.

Belly pork in the oven for tonight’s dinner. Rubbed with garlic, rosemary and fennel seeds, sat on a bed of onions and fresh fennel, bathing in half a litre of Vouvray Sec Tendre. Ah yes, Sec Tendre – what on earth is that? Very good question she responds. Well, it’s a white wine that’s not dry, but it’s not sweet either. Sort of in-betweeny. It should be a good partner for the pork belly.

Three and half hours later (it had half an hour at 200°C and then another 2-3 hours at 140°C), the pork is out of the oven resting along with the fennel. I left some of the onions in the bottom of the pan, carefully spooned off most of the fat and then added one tablespoon of flour.

After cooking that on the hob for a minute of two I added a cup of chicken stock and cooked it for another couple of minutes. You could leave the sauce like that (with soft but large pieces of onion). I decided to blitz it to a smooth silky sauce using the hand blender.

Some boiled new potatoes went in the bottom of the bowl, 2 pieces of fennel each, some onions and a piece of the belly pork (which is so tender you can just lift it from the bones). I then poured the sauce around the pork.

Belly pork is easy to cook and very inexpensive. You just need time to coax the best out of it. This is pratically a one pot dish. The Vouvray was a good choice for cooking – maybe one a little sweeter than the one I chose would be even better, a demi-sec perhaps. And then drink the rest of the bottle with the dish. It would also work with a sweet cider I think.

We had a glass of fizz as an apero (more of a pick me up shall we say). Chateau Gaudrelle’s Vouvray Brut to be precise. Lovely fresh crisp Chenin fruit. Just the job.

With it being such a miserable chilly day we felt in need of a robust red with dinner so plumped for Jean-Francois Merieau’s Gueule de Boa 2014, a rich spicy Malbec that really hit the spot. In terms of wine pairing, you could just as easily have opted for an off-dry Chenin which would have been equally delicious. Just different. Sometimes your wine choices are driven by your mood.

Gueule de Boa is a ‘jeux de mots’, a play on words. A Gueule de bois is a hangover in French!

We were moderate this evening so hoping that’s not a word I’ll be using tomorrow.