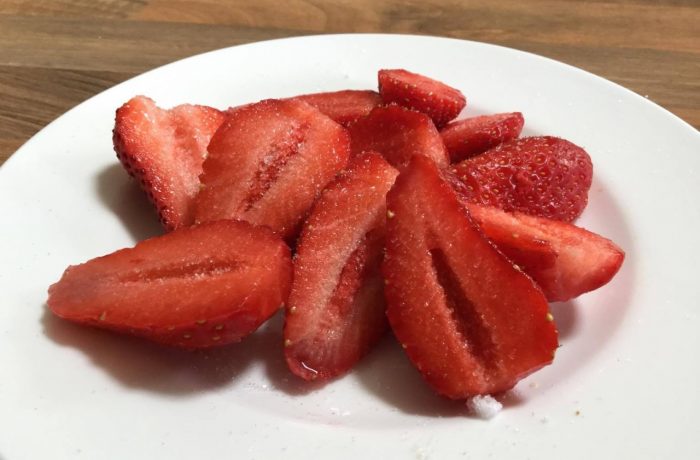 I used to hate cats. My family was a ‘dog’ family. My Dad hates cats and so I hated cats. We always had labradors – a golden one then a black one when I was growing up and then, when my children were small, a chocolate one.

Sybil (the chocolate one), came with us to France. She was beautiful and eccentric, used to run off and swim in the Loire and probably kept us all together if truth be known. Those first two years after we moved to the Loire were hard.

Sadly, a couple of years ago, we had to put Sybil down. She’d had terrible dysplasia and she made it to nearly 13. A decent life for a lab. We missed her terribly.

Nigel has always loved cats. Well, he loves all animals when it comes down to it. He’s particularly fond of cows and he loves cats. His family always had cats.

And now I love cats too. They’re different. Pesto is very affectionate (probably because she was hand raised after her Mum was killed shortly after she was born) but she’s still independent. Independent in a way that dogs are not.

So when she decided not to come back last night, it was a worry. A worry that you don’t have in the same way with dogs. Oh yes, Sybil used to wander off from time to time but we’d normally find her munching her way through the neighbour’s cat’s food.

There she was sat on the windowsill this morning when we came down. She was clearly starving, munched her croquettes and then went straight off up to bed. Aah, the life of a cat eh!

Today is Sally starter’s big day. I’ve decided she is mature enough and so am making a loaf that will be baked early tomorrow morning. My first sourdough attempt was a huge success (using the starter that Louisa gave me) but it was a complete fluke. I really have no idea what I did and how I did it and so this time, hopefully, armed with a bit more knowledge, I’ll be a bit more in control. We’ll see.

I read this morning that the UK is chartering private planes to fly Romanian farm workers over to pick lettuces and other produce that would otherwise go to waste without them. Funny how the UK needs workers from Eastern Europe (she says sarcastically). Suddenly they’re welcome. Grr Brexit, don’t get me started.

We enjoyed the first of the locally grown Gariguettes for lunch. Gariguettes are strawberries. Our favourite variety by a long way. The strawberries are small to medium in size, bright red all the way to the centre, are beautifully sweet and fragrant and have wonderful acidity. Before we came to live in France, a strawberry was a strawberry for me. Sacre bleu! How wrong was I? It so depends upon the variety. And Gariguettes are our favourite. Such a treat. Like a little ray of sunshine and happiness on a plate.

My sourdough loaf is going to plan so far. I made the ‘levain’ first thing this morning and mixed it with the flour at lunchtime. Half an hour later I added the salt and I’ve just done the first of four sets of folds. The timer is set for 30 minute intervals so I don’t forget. When the folds have been completed then it’s just a matter of waiting until later on tonight.

Drove over to Amboise to collect another order from the little épicerie Ô P’tit Vrac and then walked down to deliver a congratulations card to my girlfriend who has just had her first baby. It must be very strange for her not being able to share her celebrations with anyone. No family visits, no friends calling to wish her well. It was eerily quiet in the centre of town. I did say hello to a passing cat.

On my way back I stopped in the vineyards for a quick Instagram update. Frost is a big problem in the Loire and I talked about the mobile ‘tow and blow’ machines that force hot air down towards the ground when temperatures drop below zero. It was a bit windy and I don’t think I was very clear. Must do better.

A glass of rosé in the garden was interrupted by the need to shape the sourdough. All had gone well until that point. Tricky is the understatement. The dough was so sticky it was nearly impossible to get it off the work surface. I need one of those scraper things that real bakers use. Chances of getting one of those are slim as Amazon has closed down its delivery depots in France. I don’t suppose kitchen shops are considered essential to life (although you never know).

Oh well, into the fridge it went for the final proving overnight.

Dinner this evening was the other piece of salmon that we ‘smoked’ last night with fresh green asparagus and a zingy lemon, tomato and herb dressing.

I took a lemon and removed all the rind with a sharp knife then cut out the segments and chopped them into tiny pieces. I put them in a bowl with a tablespoon of lemon juice, some freshly chopped tarragon and chives and then added 60ml of good olive oil, sea salt and pepper to taste. There was one lonely beef tomato that cost me a fortune at the market last week (honestly, I paid over 8 euros for a kilo of tomatoes. Nearly died but didn’t have the guts to change my mind), that needed using up so I chopped that up and in it went.

When the asparagus was cooked I plated the spears up, flaked the cooked salmon at the base and then added the dressing on top. Another sprinkle of sea salt on top and it was ready to go. A very summery dish that would be lovely outside on a warm evening.

It seems odd to be able to enjoy a glass of wine in the garden at 18h30 but the moment the sun goes down, the temperature drops and it’s up sticks and move inside to light the fire. It’s only April I guess.

Tarragon and asparagus are tricky when it comes to wine. Sauvignon is said to be the obvious choice and so we went with Jean-François Merieau’s Boa Moa, a Sauvignon Rose which is a colour mutation of Sauvignon Blanc.

Boa Moa is a lovely wine. It has some of the typical characteristics of Sauvignon Blanc – slightly herbaceous and grassy but is much more tropical in character.

I’ve not spoken much about cheese in recent days which is strange because we eat cheese practically every day. We enjoyed a little Camembert de Normandie, Valençay and Morbier this evening. Who doesn’t love good cheese?