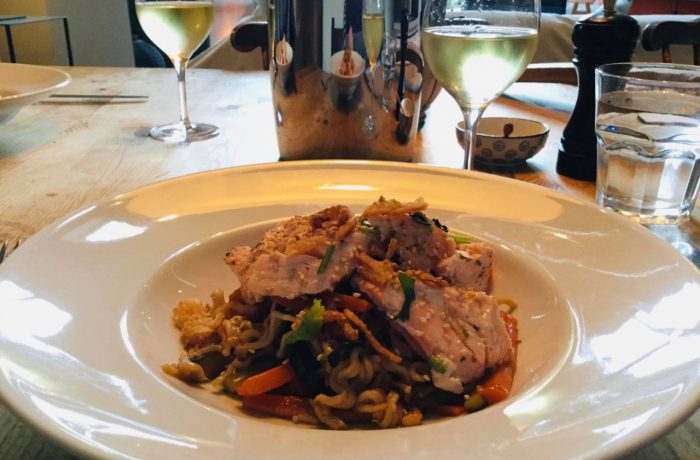 Lemon and lime drizzle cake for breakfast with a black coffee. Life’s not so bad after all. A bit of a treat to start the day but only because there was no choice. We have no milk, no bread, no eggs in the house.

It’s market day today. That seemed to come around quickly.

Sally starter is rising and falling beautifully now and I’m going to make my first loaf tomorrow (to be cooked on Saturday morning). Everything seemed nice and clear until I had a word with the boulanger’s wife.

We’ve been joking about my bread efforts and today I bought some organic flour from her for tomorrow’s loaf. She asked how many times a day I was feeding the starter and when I said twice there was a raised eyebrow. Oh no! And then she said that I could feed it with a little organic apple juice instead of water (with a little wink). Her parting comment was ‘Ah oui, c’est tout un metier’ (in other words – leave it to the professionals ). Help!

Every single book, every website, every on-line tutorial and every sourdough baker says something different. It reminds me of when I had my first baby. Every midwife gave different advice (you should put baby on his back, you should let him cry, you should wake him up to feed him, you should give him a bottle, you should breast feed) and this feels the same except this time the baby is a loaf of sourdough bread.

After my trip to the market I popped into the supermarket to stock up on other essentials (like diet tonic for our nights on the Not Gin & Tonic). I bought 2 birthday cards and a congratulations card for a girlfriend that has just had a baby (hope she gets solid consistent advice from the midwives btw), cat food (Pesto is picky and likes the most expensive type or did we do that?), exotic things like bin liners and FRESH milk.

It takes the entire morning to do the shopping but I have lots of lovely goodies and some wonderful boulangerie bread for our lunch (sigh of relief from Nigel).

This afternoon was spent getting to grips with the ‘back-end’ of the new on-line reservation system for the website. My head starts to spin after an hour or two of working my way around new systems.

A brief walk in the vineyards late afternoon cleared out the cobwebs. Rashly I decided to do a little Instagram Live while making a few observations. I rather enjoyed it. Maybe I should do that a bit more often.

After two nights off the wine, we enjoyed a glass of rosé from Lionel Gosseaume in the garden as the sun went down. Lionel’s rosé is in the Touraine appellation, a blend of Côt (Malbec), Cabernet Franc and Gamay. It was our favourite rosé of 2019. We’ve just a few bottles left in the cellar.

I was really pleased with dinner this evening. It was an improvised dish that came together very well.

About two years ago, we were given some sachets (can’t think of a better word) for smoking things in your own oven. They sat at the back of the cupboard in our old house and have sat in the back of a cupboard in this house – until last night.

Basically it’s like a bag that has 3 layers. You put the food you want to smoke between the top two layers and there is a sachet of oak chips that sits underneath. You then seal the bag and put that in the oven.

We tried it using a couple of big salmon pavés and they were delicious. 15 minutes in the oven at 190°C and they were perfectly cooked, super moist. My only quibble would be the visual aspect of the fish. It did have that slightly milky appearance on top that isn’t great to the eye.

While the salmon was cooking I stir fried some batons of carrot and courgette with a finely sliced onion, some finely shredded root ginger and a clove of garlic. After 5 minutes I pushed them to one side, poured in about half a cup of water, a teaspoon of fish stock powder and added a layer of Ramen noodles. I let them simmer for a minute or two before flipping them over to finish and then stirred them in with the veg.

The salmon came out of the oven and we decided they were way too big to have one each so I put a pile of the veg and noodles into a bowl and then we flaked the salmon into big chunks on the top. A final sprinkling of toasted sesame seeds, a drizzle of sesame oil, some crispy onions and the rest of the coriander dressed the dish.

Le Sec 2016 from Chateau Gaudrelle was our Chenin of choice tonight. Fermented in new oak barrels it’s not typical of the Chenins from this region but rich and ripe with body and weight.