Life in the Loire on lock-down. 10th May. Day fifty seven. 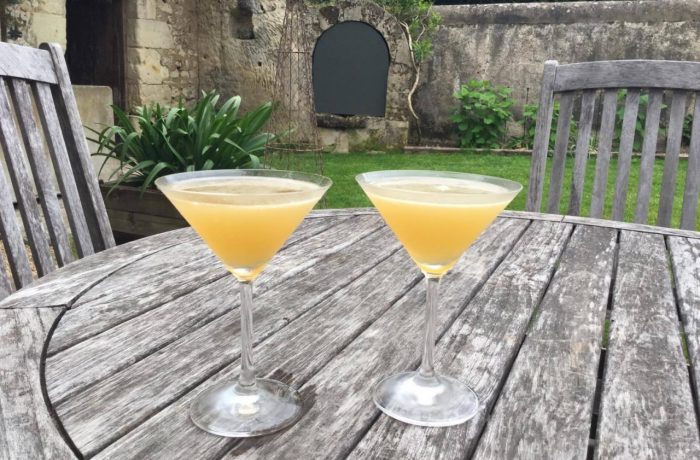 Apart from some bright flashes of light during the night, the storm didn’t materialise. Maybe today.

Déconfinement minus one. Tomorrow is another era where we’ll have a new level of freedom in France for the first time since the lock-down. Today, Sunday, life continues as it has done for the past seven weeks.

A bowl of porridge with lashings of vibrant pink rhubarb juice started the day with a zing. The rhubarb for the rhubarb and custard cake required draining and I couldn’t bring myself to throw away the bright pink juice that remained. I rather fancied making a cocktail with it but it went in the porridge this morning instead.

The weather remains close and a little threatening. Grey clouds hover above gathering momentum and then they disperse and reveal bright patches of blue sky and sunshine.

About a week ago Alain Passard posted a recipe on Instagram that caught my attention. Rosy pink apples cooked in a little water, infused with fresh tarragon and then dressed with olive oil and sea salt. It looked so pretty, it got me thinking.

So for lunch today I cooked two Gala apples as he described and then created a salad that would be complimentary to those flavours. I used rocket as the base and added finely chopped spring onions and radishes to add colour. Carrying on the tarragon theme, I made a dressing using tarragon vinegar, a teaspoon of sugar, olive oil and sunflower oil plus a little sea salt and half a clove of finely chopped garlic.

I placed the rocket on a large plate, added the spring onions and radishes and then the still warm apples on the top. In a non stick frying pan I gently fried (with no added oil) some thick slices of black pudding for 30 seconds on either side and then I placed them gently on the top of the salad.

The tarragon dressing was poured over the top, I sprinkled over some sea salt flakes, a few fresh tarragon leaves et voila! It was so pretty on the plate and a perfect summer salad with a glass of chilled Touraine rosé from Lionel Gosseaume.

I know not everyone likes black pudding. I love it but I understand if you don’t. I think some semi-soft goat’s cheese would be good too. Our local St Maure de Touraine would be a good choice.

This afternoon I spent a couple of hours on the computer writing ‘our story’ for the Montdomaine Guided Tasting Case. People love a story don’t they? Louisa and Fred’s story is so romantic and ours, well it’s different. We’re going to include it in the tasting case so people know how these two English women came to be in France. Louisa is going to illustrate the stories. I can’t wait to see what she comes up with.

Late afternoon I caught up with Will in the UK. Tired but reinvigorated by a Thai red curry he was on good form after his 24 hour gaming marathon. He, like everyone else is waiting to hear what Boris Johnson has to say this evening. Will he relax the lock-down? Who knows. The messages coming from the UK Government seem to lack clarity. The current slogan being used is ‘stay alert’ whatever that means.

Nigel was on cocktail duty again this evening. He decided to create another classic, the Sidecar. Equal quantities of lemon juice, Armagnac and Cointreau. Mouthpuckeringly fresh and just the thing to whet our appetites before dinner. As we sat out in the garden, the skies began to close in on us and we realised dinner would have to be inside.

I’d confidently told Nigel that we had peas in the freezer and so he’d based his dinner idea around that using lardons and new potatoes to create a flavourful ragout with some griddled chicken breasts. As it happens there were no peas but we did have broad beans which made a fine (if not better) substitute.

And so we enjoyed a little ragout with onions, garlic, lardons, new potatoes, chicken stock and lots of fresh marjoram. And on the top, a griddled chicken breast that had first been marinaded in chopped marjoram, finely grated lemon rind, garlic, salt, pepper and olive oil. Cooked for 3 minutes on either side and left to rest for 7 minutes it was moist and tender.

The rain has started.