Life in the Loire after lock-down. Weekly update. 9th August 2020. 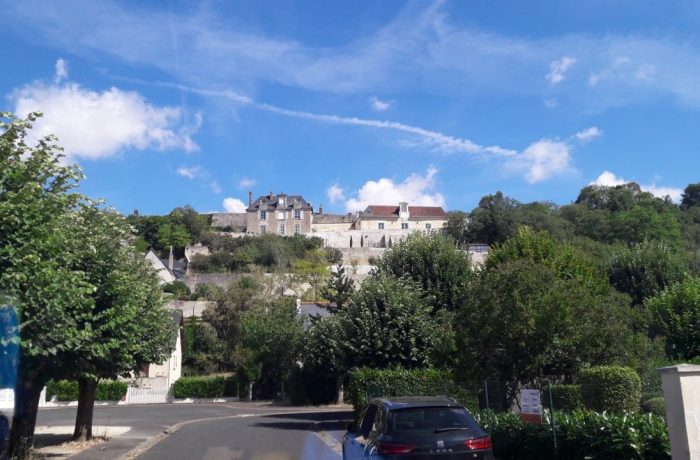 Another hot and sunny week in the Loire. The vineyards are quiet and one by one, the growers are leaving for their summer holidays before the craziness of harvest begins at the beginning of September.

On Monday I ran the tasting room for Tania and Vincent Carême. You’d think that Monday would be a quiet day, but no, it was buzzing with a steady stream of people all day.

Visitors were mostly French with some Belgians and one or two from the Netherlands. Some had come on the recommendation of their bed and breakfast or hotel, some were just passing, others came because they had tasted one of Vincent’s wines in a local restaurant.

Of course tastings have to be organised slightly differently at the moment. No touching of bottles by customers, hand sanitiser upon arrival, individual spittons and tasting outside wherever possible. Luckily it wasn’t too hot so we were able to enjoy the fresh air.

It was a very busy and satisfying day. Lots of wine sold, great to talk about wines that I love myself, good to be working.

We set off earlyish in the morning to avoid the heat and spent an hour or two just wandering among the vines, identifying the different parcels and checking out the grapes. Yields look moderate and we did see quite a lot of sunburn on the west side of certain parcels. While Chenin is very well adapted to hot climate conditions, it does suffer from too much direct exposure to very hot sun.

Before heading back to the car we stopped at the little épicerie Les Bocaux d’Alex in the centre of the village for coffee and biscuits and bought a few bits and pieces while we were there. It almost felt like we were on holiday sitting in the shade sipping and chatting.

Wednesday was a day of cooking. New friends that have bought a house in the next village down came round for dinner in the evening. We planned a simple dinner much of which didn’t go as planned.

My sourdough overproved overnight so that became a rosemary and red onion focaccia and the almond cake that I made for dessert didn’t behave at all as expected in the oven. The thick layer of caramelised flaked almonds gracefully sank to the bottom rather than hover as a crunchy layer on the top.

A compote of apricots cooked with sugar and some fresh lavender from the potager to go with the cake and we were all set. A lovely evening in the garden in the warm summer air.

Thursday saw us get out the bikes. The first time for me in a few weeks. We headed up to the vineyard plateau and did a loop for about an hour. After the inital panting to get up the hill (me not Nigel of course) it was lovely to feel the breeze on our faces and get a bit of exercise.

Friday and Saturday afternoon I was back in the tasting room. The heat was punishing (it went up to 37°C) so tasting outside became practically impossible without burning both the customers and the wines! This is when trogolodyte caves are so wonderful. The cool moist air and constant temperature provides an escape from the heat. You could see the look of relief on people’s faces as they stepped in from the outside.

On Sunday I had a vineyard walk with a girlfriend and Nigel went out on his bike during the morning. After a light lunch and a glass of very cold rosé we decided to just opt out and have a long siesta.

The heat was still punishing at 8pm but we were able to enjoy our cheese in the garden and then had a late vineyard stroll as the sun came down. As we looked over to Amboise in the distance we could see the odd flash of lightening. The weather forecast predicted storms and even the possibility of hail which thankfully for the growers, didn’t appear last night.

Favourites on the dinner table this week have been the soothingly chilled gazpacho which was wonderfully welcome in the heat, crispy salmon cooked with yellow courgettes from the garden, a mustardy potato and comté stack with a roasted pepper dressing and tender pork fillet cooked with apples, onions and thyme.

And on the wine front. An inexpensive Tavel proved a lovely change from the rosés we’re used to drinking and a Dolcetto d’Alba that we normally adore has given us something to talk about and retaste for several days on the trot trying to decide what, if anything, was wrong with it.

A totally inappropriate food and wine pairing of salmon with a bold Malbec from Chateau de Montdomaine turned out to be absolutely delicious and we took real pleasure in Domaine Vacheron’s beautiful Sancerre 2017.

Arnaud Lambert’s Coulée de St Cyr with it’s mouthwatering acidity and tension was fantastic with the pork fillet and apples.

Finally, to finish the week, we tried a very inexpensive rosé from St Pourçain. Not in the same league as the Tavel, it was a little on the lean side but not unwelcome on a sunny day. The back label got me going however.

What? You have to be joking. “Their delicateness, their freshness and their youth goes perfectly with the female temperament”. Give me a break! Whoever wrote that is living in the wrong century.

See you next week!